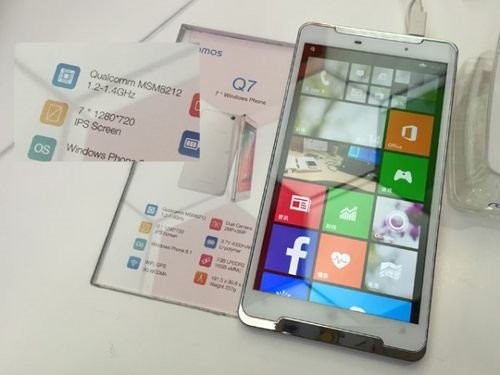 5-inch display entry-level Windows Phones from Microsoft are becoming quite the norm these days, with the Microsoft Lumia 535, 540, 640, and others having a 5-inch display size. However, other OEMs are apparently looking to go even bigger. At the Hong Kong Electronics Fair today, Ramos unveiled a massive 7-inch device running the Windows Phone 8.1 OS.

Apart from the screen size, the Ramos Q7 as an entry-level Windows Phone has some pretty basic specifications, including:

Other features of the device are unknown, but as can be seen from the list, the device is quite mediocre in terms of features. However, one other thing that stands out is the device's monstrous 4000 mAh battery. The most obvious reason for the smartphone to have such a massive battery is likely due to its 7-inch screen, which will undoubtedly suck a lot of power.

While the Ramos Q7 may not appeal to everyone, it clearly targets the entry-level audience; people torn between choosing a tablet or a phone, but not having enough money to buy both. The pricing and availability details of the device are yet unknown.

Source and image: ITHome via WMPoweruser