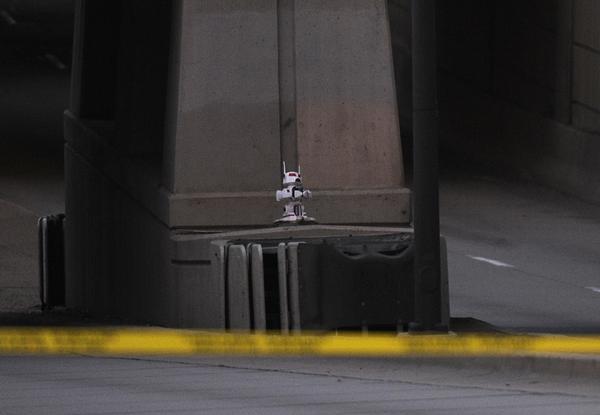 Denver police swung into action Wednesday afternoon as the city faced a harrowing robot threat that shut part of the city for more than two hours.

The Denver Post reports that police were called around 3:30pm after a concerned citizen discovered the deadly robot, which was described as around eight inches tall, white and made of plastic, cemented into the pillar of a footbridge near 20th and Wazee streets. Police quickly closed 20th Street between Blake Street and Chestnut Place and a tense standoff began with the tiny harbinger of death, with nobody allowed within 100 yards.

A bomb-squad robot was sent in, followed by a heavily-protected officer, as rush-hour traffic piled up around the area.

Denver police spokesman Matt Murray told the Post that around 5:30pm, police decided to put an end to the miniature figurine's rein of terror, blowing it to pieces in order to ''render it safe''. Subsequent investigations showed there had not been any threat to public safety.

Police have no idea who placed the robot under the footbridge or why, and it remains unknown whether the incident marks the first incursion of a larger robot invasion.