While everyone knows that you need to have a legitimate license to use a Microsoft product at home or at work, licensing from a business point of view is extremely complex. Even the licensing options available to retail products is adding a level of complexity that the regular home user would seldom need. With that in mind, I wanted to put together a guide to licensing for the Microsoft product family, to give users new to the concepts an overview of what to expect.

Recently, I’ve been involved in a Microsoft audit. It’s been an interesting experience, one I had never been privy to until now. The auditor used to work for Microsoft, but moved to the company’s he with now, his sole role to audit Microsoft customers to ensure compliance with the companies licensing agreements. I’ve had great dealings with him and learnt so much in such a short space of time, which I will get into later, but to quote my new friend:

Once you start getting into OEMs, SA, VL and license agreements, Microsoft licensing becomes a very dark art.

He isn’t wrong. I’ve been ignorant in the past, thinking that when you buy a product like Windows, Windows Server, Exchange, SQL, etc. you own it and can use it. Not quite. You may own the products and in some cases, like with Windows Server OS’, get given a number of complimentary CALs when you purchase the software in the stores. It’s these CALs that dictate how many people can then use these products in your environment. But let’s keep things simple for now.

These are the simplest license Microsoft offer, to a point at least. The idea behind FPP (more commonly referred to as retail) licenses is that you walk into a store or buy the software online and that’s it. You own it, yours forever and a day. Windows and Office are the ones that at some point you may have bought. You can install/uninstall/reinstall the software as much as you like, as long as it’s only installed on one device at any one time.

Some additional allowances with Office FPP licenses may allow you to install the same copy on a portable device (laptop or tablet) for use by the primary license owner; in other words, the person who bought and installed the license on the first desktop computer.

Windows Server works in the same way; buy the license and use it on as many different pieces of server hardware as you like, as long as it’s one product key per one piece of tin. But retail Windows Server licenses will also come with five “free” client access licenses (CALs, which I will cover shortly) that allow five users or devices to connect to that Server instance at any one time. A CAL is the right to make authenticated connections to server(s). This is when licensing starts to get complicated.

If you buy a PC or laptop from PC World, Best Buy, or direct from Dell or HP, you will almost certainly get a Windows OS installed on it. You might even get Office as well, depending on the Original Equipment Manufacturer (OEM) you choose. These licenses are known as OEM licenses with their cost bundled in with the final price of the computer you buy. They are usually slightly cheaper than buying FPP licenses.

So, what’s the difference between Retail and OEM licenses? You’re buying the software and you own it, so you would think that it’s yours to use how you like. Nope! An OEM license lives and dies with the PC it was bought with or first installed on. So Windows, Office and Windows Server are all tied to the system and its hardware configuration; it’s classed as non-transferable. However, it is possible to upgrade and replace components in the system, except the motherboard. The motherboard can only be replaced, and no new license required, if it’s faulty. And you will have to get the same motherboard from the OEM to maintain license validity.

You can, when buying an OEM server license, purchase CALs with that server license. But as CALs aren’t tied to a server license, you only need to ensure that you have enough CALs for users and/or devices for the correct version (being 2003, 2008, 2012, etc.) of the server OS they are using. I’ll cover CALs, in more detail, in part two. 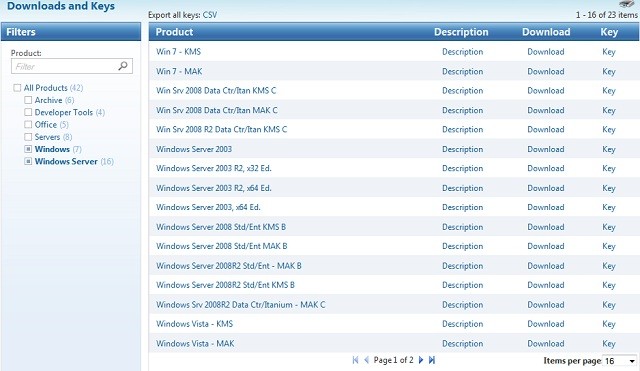 This is where businesses and organizations come into play. Most companies that require the purchase of Microsoft software in bulk, or require more options, manageability and flexibility, will generally use Volume licensing. Like FPP and OEM, the licenses never expire, but Microsoft also offer a subscription option. This option will expire and the licenses tied to it become invalid, unless the subscription is renewed.

You have to make an initial purchase - a minimum - of five licenses, but they can be split across the entire suite of products Microsoft offer. A Windows Server 2012 license, two Windows 8 licenses and two Office 2013 licenses and you’re there. You can then buy additional licenses in whatever number you need, once the initial five-or-more agreement is in place.

Much like OEM licensing, you can downgrade the software to the previous version, same edition. However, now you have the ability to downgrade applications like Office to their previous version, same edition.
Portable use rights are extended to Volume licensing as well. Have you a user with a desktop and laptop? Use the same license on both devices at no additional cost! FPP does offer this, but its availability is limited and will depend largely on the piece of software.

You can transfer license between machines now too! If you have a SQL Server that dies, build or purchase a new server and transfer that SQL Server license to the new server.

Finally, like OEM licensing, Volume licensing is cheaper than FPP as you’re only getting the media, and not a packaged product.

I’ve put together a short table that give you the ins and outs of the three license types.

This is a very broad overview of the features of each license type. While this may seem simple, once Volume licensing and, to a point, OEM licensing is in play, Microsoft can add CALs and Software Assurance into the mix that can start to really confuse matters.

In part two of our guide, we’ll look at Software Assurance, Client Access Licenses, along with multiplexing and virtual environment licensing.