Acer has produced a lot of unique and interesting ideas with its Predator gaming lineup. The Predator Triton 900 is an actual gaming convertible, and the company makes an immersive Predator Thronos gaming chair. The Predator Helios is right along those lines of innovative gaming ideas, with a keyboard that slides out.

The slide-out keyboard is a really neat idea. Sliding it out exposes two fans and provides better ventilation. And once you slide out the keyboard, the Predator Helios 700 automatically overclocks the CPU and the GPU. In fact, there are four preset overclocking modes on this PC.

The model that Acer sent me costs $3,999, although it starts at right around $2,000. So let's be clear about something. This laptop is for gaming, and for people that absolutely care about performance while gaming. This isn't like a Lenovo Legion Y540 that I said was good for work and the occasional gaming. Because not only is the Predator Helios 700 powerful, but it has the size and weight to match. This isn't something you bring into the office. It's something that you win games with.

The Predator Helios 700 is a huge machine. As I mentioned above, this is a laptop for competitive gaming. If you're looking for something that's more portable, you can look toward a lesser Predator or even Acer's casual Nitro gaming laptop lineup. But with great size, comes great power.

And when I say it's big, I mean it. This thing is over an inch and a half thick, and it weighs in at over 10 and a half pounds. You won't even fit it in most standard laptop bags. Did I mention that it's big? 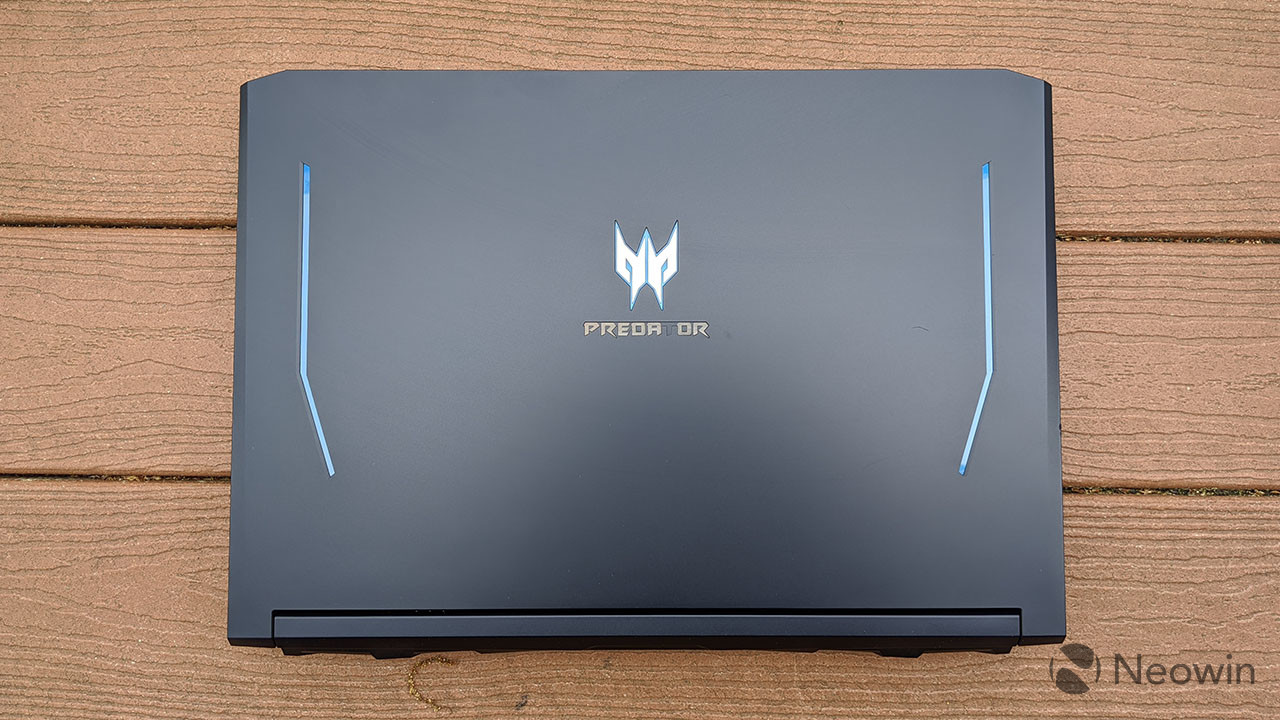 The Predator Helios 700 comes in a deep shade of blue, and all of the accents are blue. In fact, there are some areas of lighting, such as the Predator logo in the lid, that can only light up in blue. Strangely, that's one of two lights that isn't customizable, while the other is the trackpad. You'll also find blue vents on both sides and the rear, allowing for better cooling by placing dual fans in the corners. 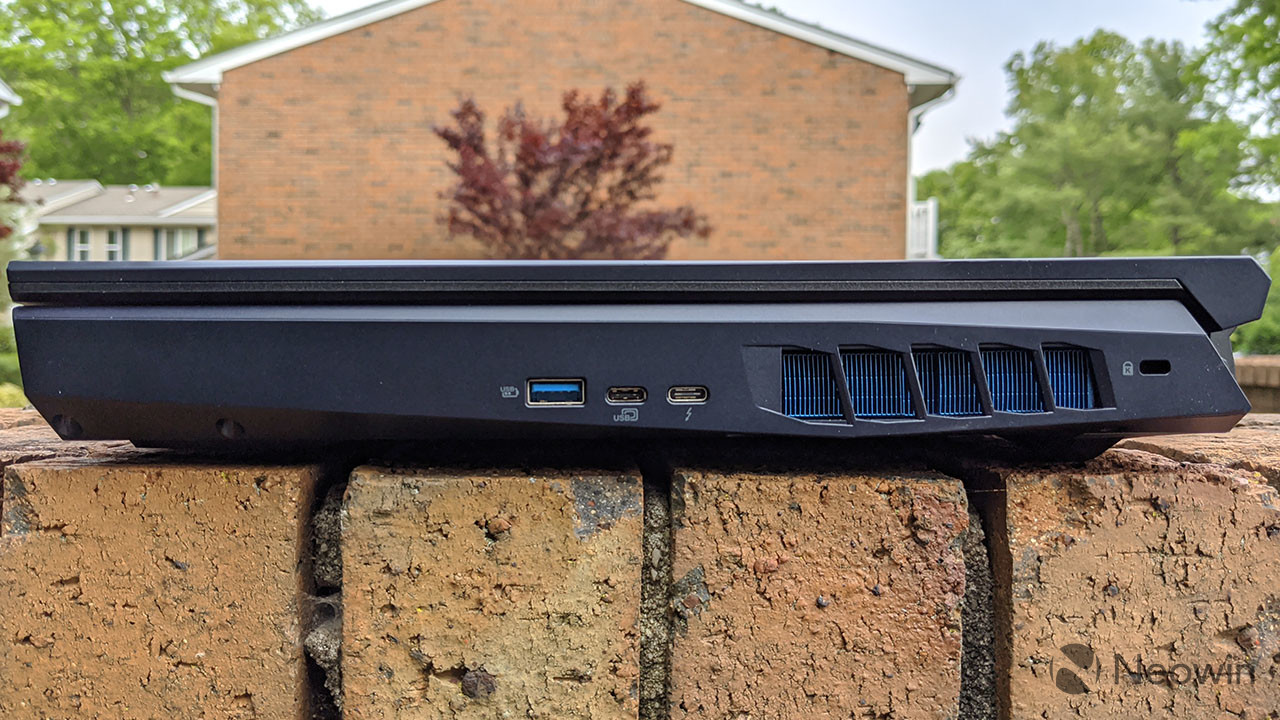 As far as ports go, there are plenty, and these are quality ports. On the right side of the PC, there are two USB Type-C ports, one of which is Thunderbolt 3 and one of which is USB 3.1 Gen 2. While both ports are clearly marked, I'm not a big fan of putting two identical-looking ports right next to each other when one of them is lesser than the other. Also on the right side is a USB 3.1 Gen 2 Type-A port. 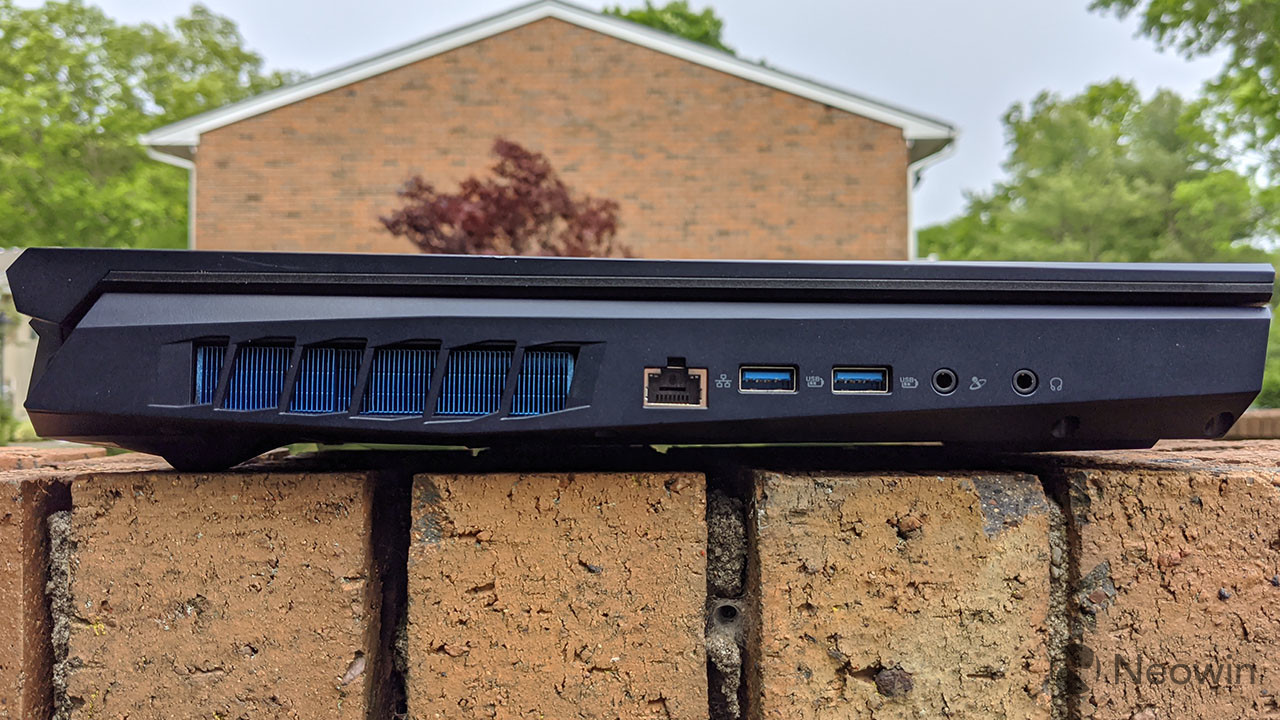 On the left, there are two other USB 3.1 Gen 2 Type-A ports, along with Ethernet, audio-in, and audio-out. Yes, if you're using a headset, you'll need one that has two 3.5mm pins, or a USB headset. 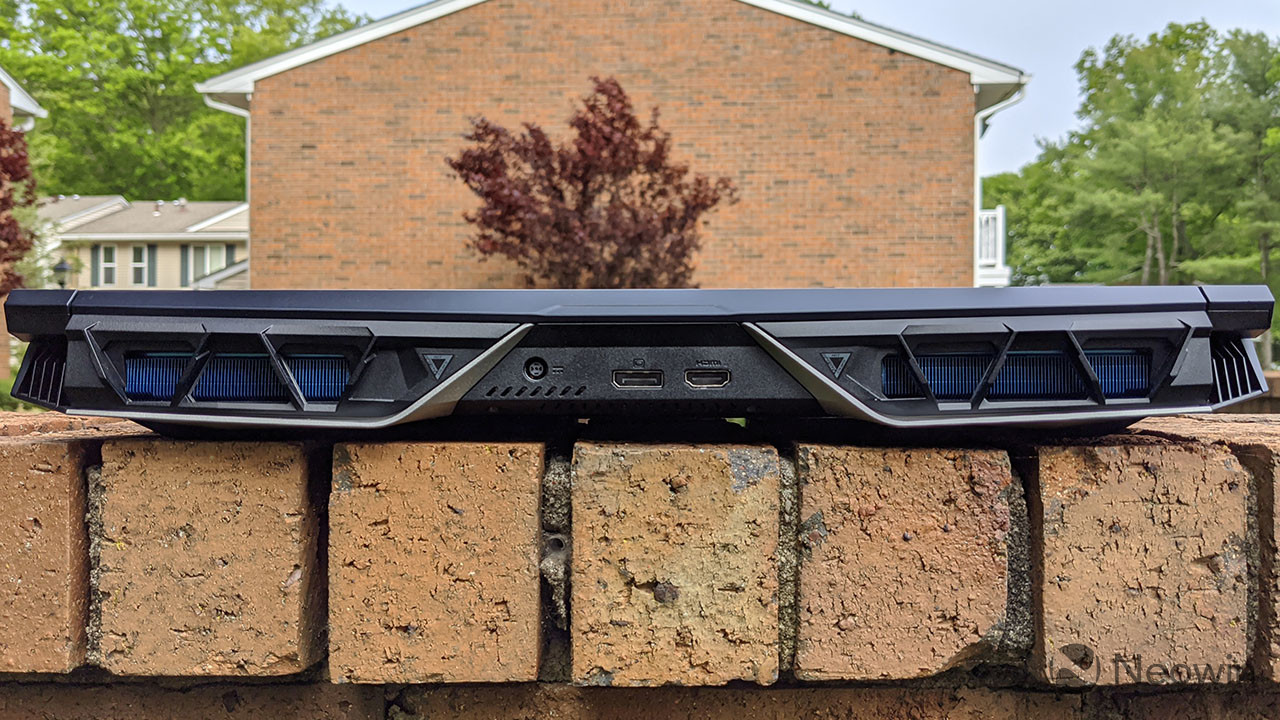 On the back, there's a full-sized DisplayPort 1.4 port, HDMI 2.0, and a power jack. You should have no problem hooking this up to a 4K monitor or an FHD or QHD monitor with a higher refresh rate. This PC has the ports that have the bandwidth to do it and the graphics power.

The Acer Predator Helios 700 has a 17.3-inch 1080p 144Hz display that supports Nvidia G-Sync, and it's pretty sweet. You can control the frame rate using the Nvidia Control Panel application, something that's strangely not pre-installed, an odd omission when Acer pre-installs so much other stuff. Luckily, you'll be greeted by a message asking you to install it as soon as you go through the out-of-box experience. 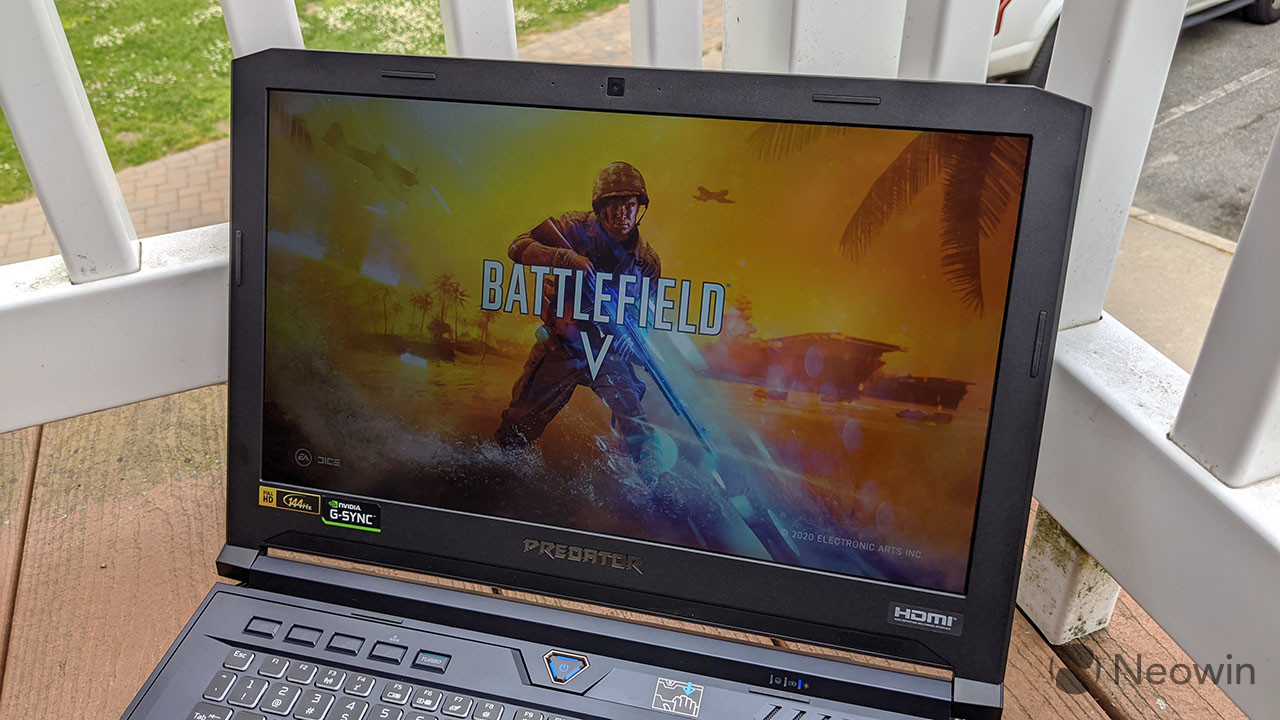 As you'd expect from a gaming laptop, it's a matte anti-glare display with no touch support. Touchscreens can have false touches, and even if it's rare, that's not something you want to happen at the wrong moment. And of course, glares make it harder to see the game. I do have a fondness for Acer's matte displays though, as they don't tend to look washed out as some competitors do.

The 1080p resolution is fine too since it allows for a higher refresh rate. 144Hz is definitely better than 60Hz. It allows for smoother motion and will absolutely improve your gameplay. My only issue with that is that for almost four thousand dollars, I'd want an even higher refresh rate. For example, the Predator Triton 500 that was announced in April has a 300Hz refresh rate. This laptop does predate the newer 300Hz PCs, so it's a fair omission, but you might want to wait for a refresh on this one if you want something a little better. 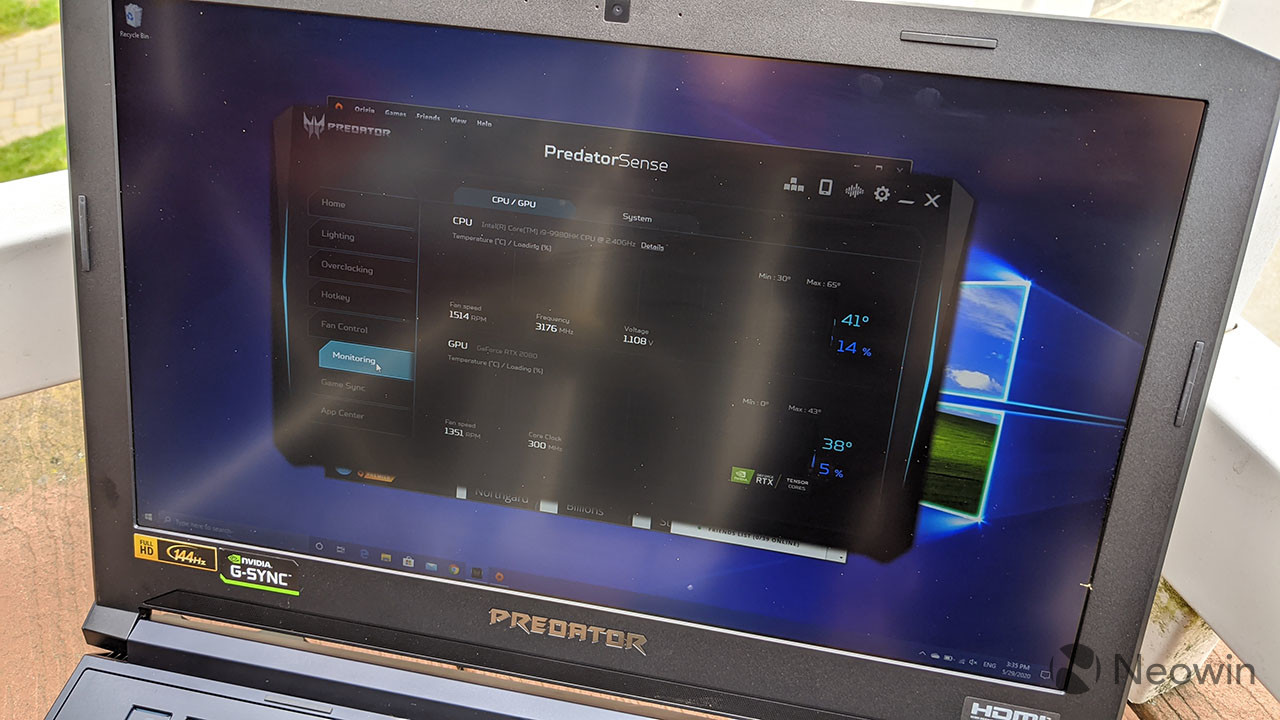 The Predator Helios 700 uses Waves MaxxAudio for 3D audio and Acer's TrueHarmony. The speakers sound great, and they're loud too. I really can't say how many gaming PCs I've used where I had to use a headset only because the speakers on the PC couldn't cut it. This one gets the job done, and it does the job well.

The keyboard is the highlight of this review, but we'll get to the part about sliding it out in a moment. Naturally, it has RGB lighting, and there are tons of options. You can set the lighting by key, by zone, or all at once, and you can use any of 16.8 million colors. On the numpad on the right, there's a dedicated button to launch the PredatorSense app, which is what you can use to control the lighting, along with programming the three hotkeys, overclocking, fans, and more. 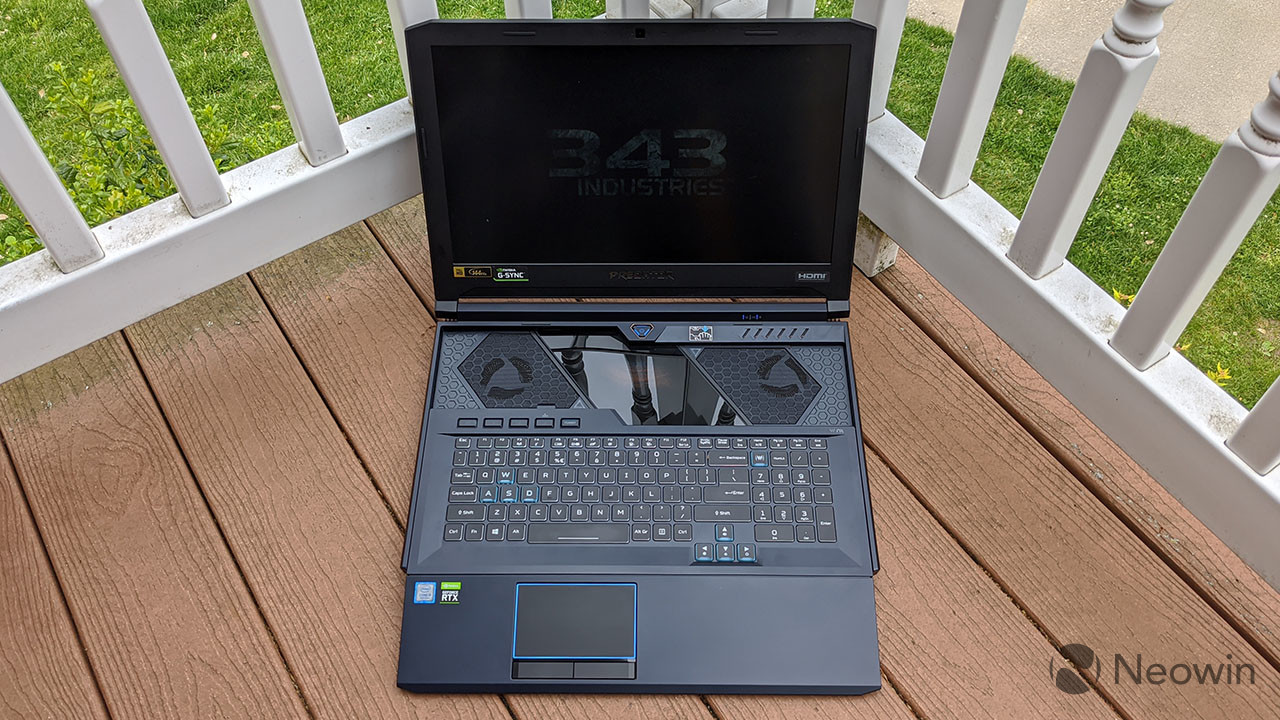 The keyboard slides out by simply pulling on it, and you'll see a little sticker that indicates that if you're confused. Once you do, you'll hear a noise that's clearly designed to sound like some kind of virtual engine powering up, and a message on the screen that says "auto-overclocking". This also exposes more vents above the two fans, allowing for better airflow. There's lighting in there too, which can once again be customized in PredatorSense. 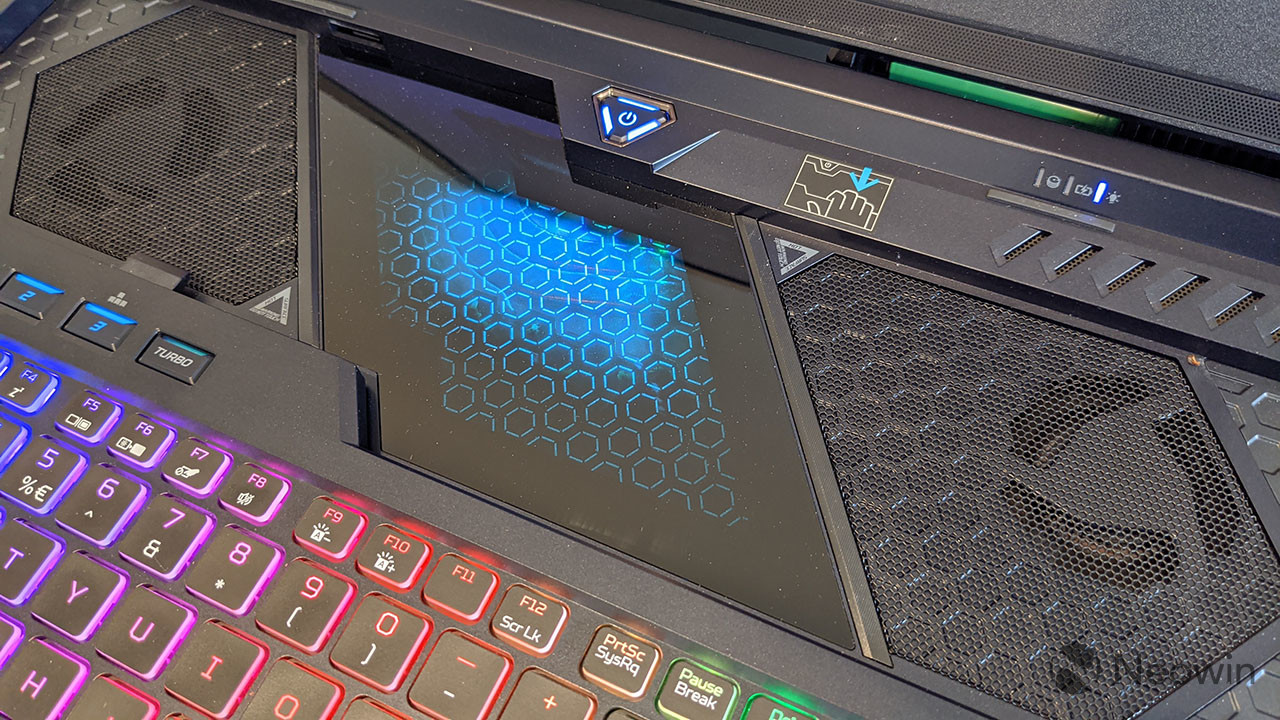 There's also a Turbo button next to the three hotkeys. If you press this button, you'll hear the fans kick on to their max setting, and performance is pushed as hard as it can go.

One nice thing about it that feels like it flies a bit under the radar is that this is a very easy way to overclock the system. You don't even have to open the PredatorSense app to do it, let alone going into the BIOS and adjusting CPU settings. It's also a nice palm rest for while you're typing or playing. 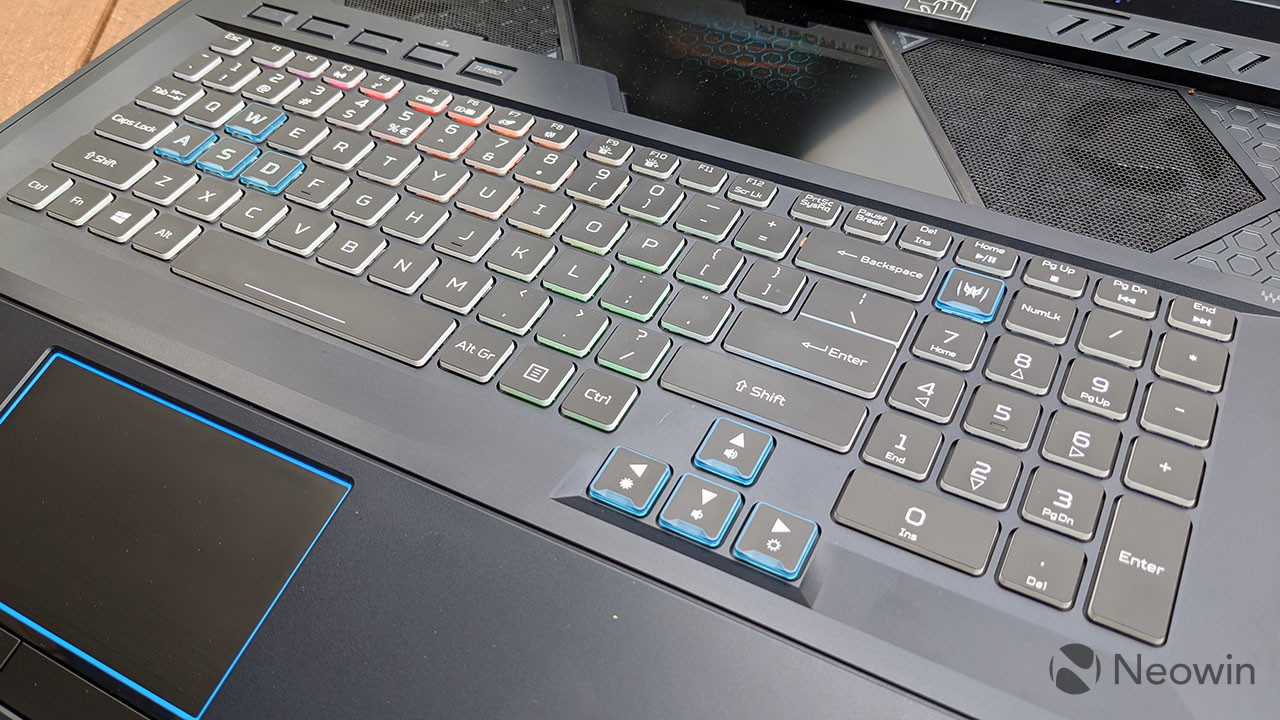 The trackpad isn't clickable, which isn't surprising for a gaming laptop. You don't want to end up accidentally clicking during a game. It has two physical buttons underneath it, and a blue light surrounding it. Just like the Predator logo on the lid, the color of the lighting can't be changed. For this one though, you can turn it off if you want.

The blue lighting just sort of confuses me. When it comes to RGB lighting, I want everything to be in sync, so if I can't make the trackpad match the keyboard, that's annoying. Remember, this is not a cheap machine.

The Acer Predator Helios 700 includes an Intel Core i9-9980HK CPU and an Nvidia GeForce RTX 2080 GPU, both of which are overclockable. Yes, it's a ninth-generation CPU, and yes, this will be refreshed with 10th-generation chips at some point.

There are four different overclocking settings in the PredatorSense app: Normal, Fast, Boosted, and Extreme. You can control these for the CPU and GPU separately if you want to. When the HyperDrift Keyboard is 'docked', you have access to Normal and Fast. And in fact, if you don't want granular control over the CPU and GPU, you can access each of these settings without ever opening PredatorSense.

If you're in Normal mode, sliding out the HyperDrift keyboard automatically puts you in Boosted mode. From either one of those settings, pressing the Turbo button will put you in either Fast or Extreme modes. 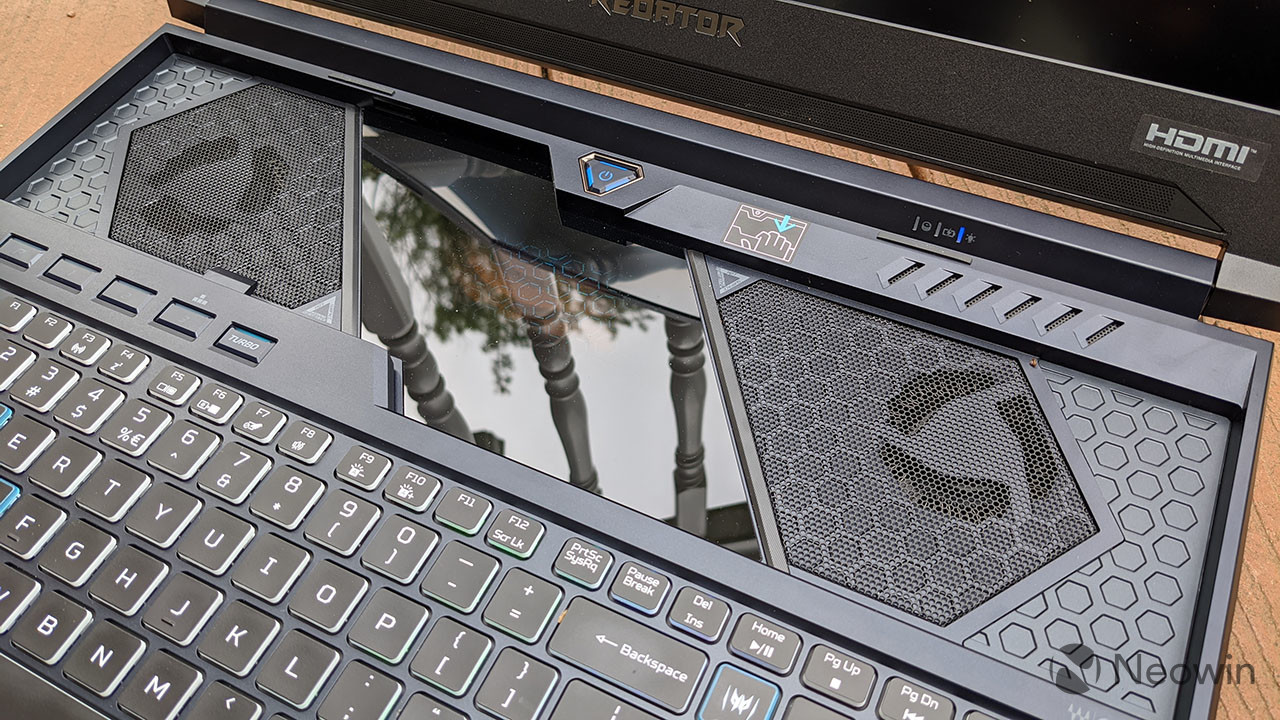 The performance is phenomenal, and while I didn't prefer to use the Turbo option much because it's just so loud, having it there was an easy way to get through any GPU processing hurdles when playing games. If your game starts to stutter a little bit, just press the Turbo button and that will clear right up.

As far as battery life goes, just forget about it. It has a 71.9Wh battery, which is massive, but there's so much power behind this PC that you really can't play a game without it being plugged in. You'll get a couple of hours out of it, and running out of juice while playing isn't something that you'll want. This isn't surprising, of course. There's a trade-off between power and battery life to be made, and this laptop goes all-in on performance.

For benchmarks, I used PCMark 8, PCMark 10, 3DMark, and VRMark, running each test in Normal and Extreme modes.

The Acer Predator Helios 700 is an absolute beast of a gaming laptop. It makes overclocking easy, with a slide-out keyboard that provides additional ventilation. The only problem is that for four thousand dollars, it doesn't exactly have current specs. 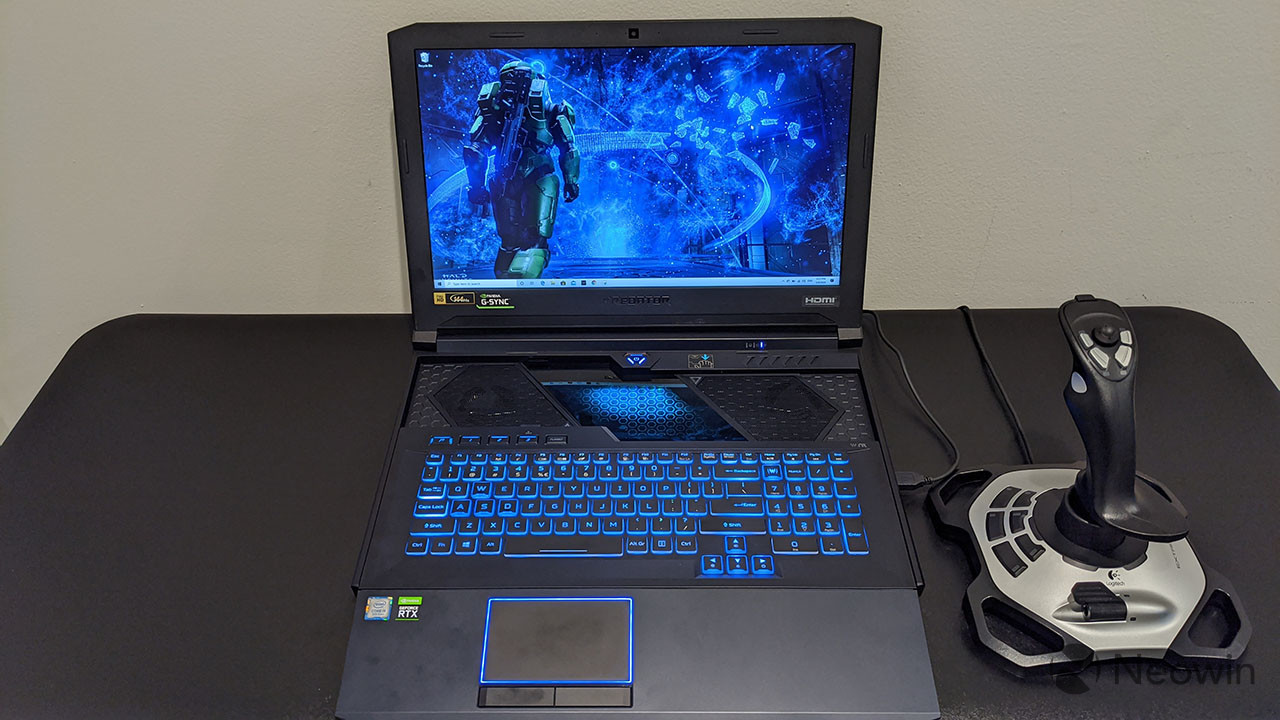 It doesn't have 10th-gen Intel processors, and while the display is 144Hz, there are higher refresh rate screens out there on laptops now. Obviously, Acer will refresh this PC, and you might want to wait until then to pick this up. It's still a beast, but when the new model launches, presumably the price on this one will come down a bit.

It's also big, heavy, and doesn't get great battery life, but that's the cost of having this much power. Games look and play great, with real-time ray tracing and DLSS coming from Nvidia's RTX GPUs, the high refresh rate, and the power of overclocking already powerful internals.