Acer's press releases include details on the company's notebook-tablet hybrid device, the Acer Iconia W510. The 10.1 inch device can connect with an optional keyboard dock that will extend its battery life for up to 18 hours. There's also a micro-HDMI port and a microSD card port.

Also coming from the company is a stand alone tablet, the large 11.6 inch Acer Iconia W700. The device comes with a cradle that allows users to view the screen in a number of different positions. The tablet also comes with three USB ports, a micro-HDMI port and two camers (front and rear).

Acer will also release touch-screen Windows 8 notebooks under the Acer Aspire V5 Series brand. There will be two notebooks, 14 inch and 15.6 inch models, both with Intel processors and NVIDIA graphics. There will also be touch screens on the Acer Aspire S7 Ultrabook laptops, 13.3 inch and 11.6 inch, that will have 13 and nine hours of battery life, respectively. 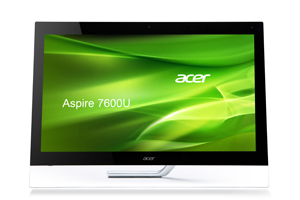 The Acer Aspire M3 Ultrabook will also have a touch screen and a frameless 15.6 inch display, and can include an NVIDIA GeForce GT 640M graphics chip inside. Finally, there's the Acer Aspire 7600U all-in-one PC. It has a 27 inch monitor with a resolution of 1920x1080. It supports up to 64 points of simultaneous touch with its optional swivel stand.

Like most of the PC makers at IFA, Acer declined to state prices for their Windows 8-based products.