It's been almost four months since Apple released iOS 10, the latest major update to its mobile operating system. The OS was made available to a wide range of the company's older devices, as well as coming pre-installed on its newest iPhone 7 and iPhone 7 Plus handsets. 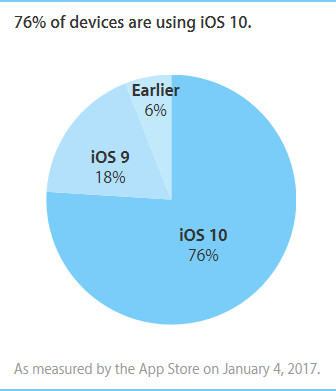 By late October, around six weeks after its rollout began, Apple revealed that iOS 10 was installed on 60% of its active mobile devices. Now, the company has updated that figure on its developer site, showing that iOS 10 installations have since risen to 76% of the active iOS user base.

That's left iOS 9 installed on just 18% of active devices; a day before iOS 10 was released, version 9 peaked at 88%. 6% of iOS devices still in use remain on older versions of the operating system.

Apple has since rolled out numerous smaller updates to iOS 10; a beta of iOS 10.3 - rumored to include a new 'Theatre Mode' - is expected to be released next week.