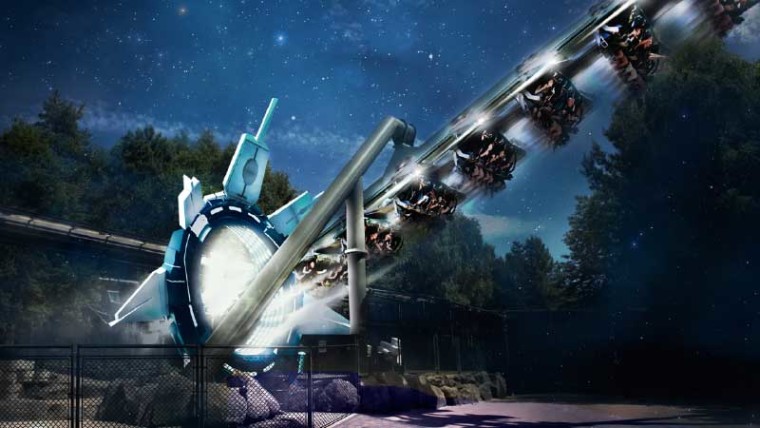 Alton Towers, one of the UK's major theme parks, has announced that a new virtual reality rollercoaster - Galactica - will open in April. Passengers will be required to wear a VR headset which has been specially designed to stay attached to the wearer's face during the ride. The wearer will be taken on a trip through space and all the twists, turns and drops will be syncronised with the real rollercoaster.

We can finally share the news...In April 2016 we will launch Galactica. The worlds first rollercoaster fully dedicated to virtual reality.

Galactica will combine the amazing elements of our flying coaster with a virtual reality journey that sends you soaring into space!

Passengers will lie down during the three minute ride and experience 3.5 Gs - more than what real life astronauts experience going to space. Each train will hold up to 28 passengers, three of which will be in motion at one time. The ride has a maximum speed of 75km/h (47mph) and lasts 189 seconds. The biggest drop is 20 metres (66ft) and Alton Towers say they can get 1,500 passengers on the ride every hour.

The theme park hopes to restore the public's confidence with Galactica following an accident last year on their 'Smiler' rollercoaster which is still shut. In that accident two women had to have legs amputated after their carriage collided with an empty carriage on the tracks; fourteen other were less seriously injured in the incident. The operator error subsequently led to Merlin Entertainment's- the owner of Alton Towers - shares to drop by more than 20%.

They're currently only trading at 4% below pre-accident levels, but that may soon change if the company convinces the public their new VR ride is worth it.