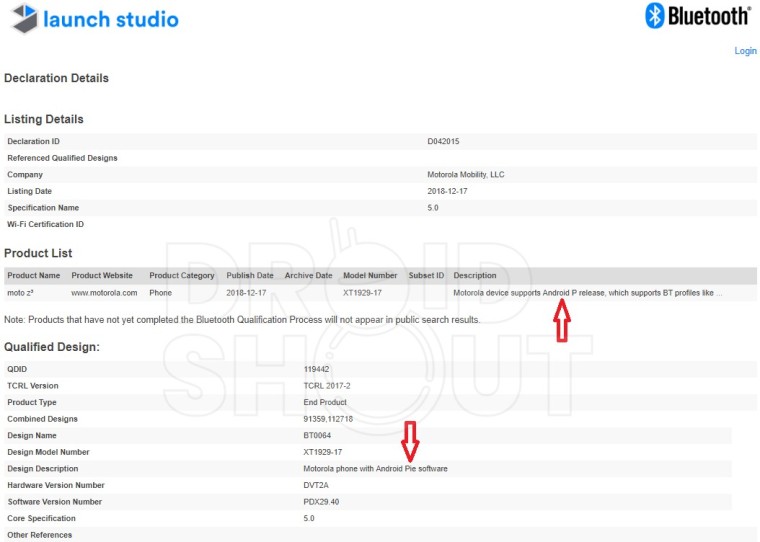 Moto Z3 users have been waiting to receive an update for Android Pie ever since Motorola revealed its plans to release the latest version of Android to a few of its models - including the Motorola One Power and the Z3. This announcement was made in August, and since then Android 9.0 has already been made available to many of the company's other smartphones, but not the Z3. Luckily, it seems that the wait will soon come to an end, as hinted at by the recent Bluetooth SIG certification for the Pie-running smartphone.

The Android update for the Moto Z3 is labeled PDX29.40 on its Bluetooth certification. Other devices set to be upgraded to this version of the mobile OS include the Moto Z3 Play, Moto X4, Moto Z2 Force Edition, Moto Z2 Play, Moto G6 Play, Moto G6 Plus, Moto G6, and the Motorola One. This certification suggests that the release date for the update isn't very far off, with the possibility of it coming out before the year's end looking high.

Several improvements and new features will be included in Android 9.0. These include a better Do Not Disturb mode, an extended battery life, redesigned split-screen mode, a simplified method for managing notifications, restructured Quick Settings, easier volume controls, and an improved Navigation and Recent App.

Finishing the rollout for Android Pie might take Motorola a few weeks, which means your mileage may vary. Still, the fact that we're getting closer to Pie being made available should be good news for owners of the Z3..