Emojis are extremely common nowadays and are integrated into almost every browser out of the box. Many of us got our first taste with emojis years ago before they were popular, and now that they've taken over and there are hundreds of them, it's difficult to get back in the loop. Not anymore, though.

Dango, named after the Japanese dumpling, appears as a little button that pops up and hovers over your screen whenever a keyboard comes up. It then, depending on the app you're in, would read what is on the screen (i.e if someone has sent you a message on WhatsApp) and suggest an emoji with which to respond.

Alternatively, whenever you begin to type out your own message or response, it would also recommend emojis to use. Said the word pizza? It would show a pizza and food emojis. Said you're sorry? It would show a number of different emojis with sad expressions. Laughed? You'll get a half dozen joyous emojis to pick from. It's completely predictive and uses a fairly rich training set mined from various different places to try to predict what sort of emoji would be needed for a particular phrase or statement. 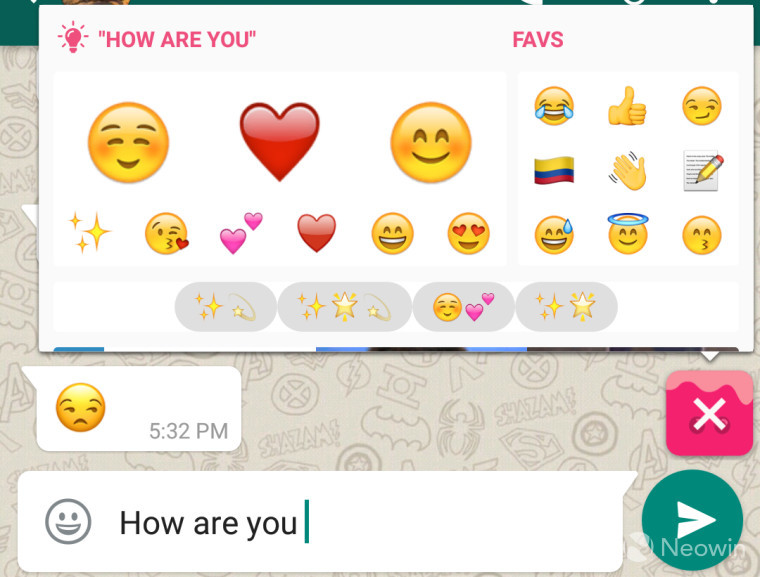 The app is free and has a number of different features which make it work quite well. Aside from emojis, it also does GIFs (which, depending on the app, it would automagically convert into videos and similar) and stickers. You can also download entire GIF and sticker packs and it would provide the same machine learning abilities to recommend those GIFs and stickers based on the text that the app reads.

It allows people who were emoji-agnostic to get into the emoji hype - I was one of them. Emojis were never really my thing and they were quite confusing, but where, what and why made a lot of sense after a very short amount of time. "Favs" is a list of nine emojis you use most frequently and it allows you to persist that history across different apps. This is great for those who hate digging through for an often used but heavily buried emoji.

All of the work happens on your phone, so you're not sending data back for analysis on the cloud (unless you opt-in) and you can outright disable things like GIFs if that's not your thing. You're also able to disable it in certain apps (you wouldn't want it to show up when you're editing a document) with batch disabling and enabling if you only want it to work in certain apps.

It doesn't always work quite well and only really works for the most common or obvious things. This isn't necessarily a deal breaker, but it does diminish the app's usefulness.

Both of the above would definitely improve over time as the developers feed it more training data, but in the meantime it's an issue.

One major flaw with the app seems to be battery consumption, though, as I've caught it using as much as 5-6% battery on a day where I was heavily texting.

As of writing, Dango has a rating of 4.4 on Google Play from 2,135 total votes. You can check out Dango for yourself on the Play Store here.