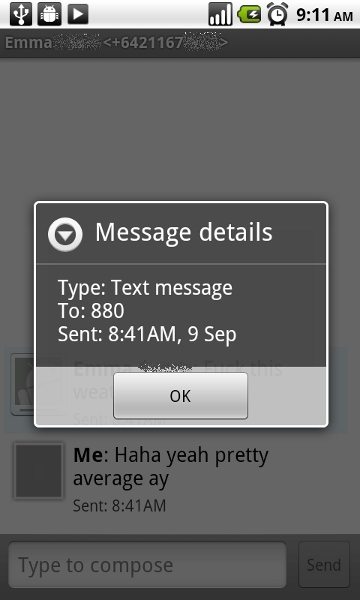 Android users are fuming over a bug in Google's mobile OS that causes SMS messages to be sent to contacts other than the one chosen, or even to an entirely random contact.

To make matters worse, a bug report on the Android developer's forum shows that Google has been aware of the bug - for some reason rated as medium priority - since late June last year. In their original issue posting, developer d...@rx7.co.nz gives a summary of the problem:

The glitch appears to be impacting at least devices running Android 2.1 (Eclair) and 2.2 (Froyo), with some users claiming the bug still exists in the recently-released Android 2.3 (Gingerbread). Model of phone does not appear to make a difference and there appears to be no reliable workaround at this point.

Where the SMS message ends up also appears to be a game of Russian Roulette, with some users reporting their texts ended up with a contact they had previously sent messages to, while others reported messages being sent to contacts they had never been in touch with before.

With the latest statistics from Google showing that some 83 per cent of Android devices are running either version 2.1 or 2.2, the bug could potentially be impacting the majority of Android users.

Furious developers have questioned why Google is seemingly ignoring such a critical flaw, with one accusing the company of forgetting that ''Android phones need to be phones''.

''That sounds unlikely right?  I mean you pay upwards of $200 for a smart phone, and next to making phone calls, sending SMS text messages is probably the most used feature of the phone.  But it’s true, and if you don’t believe me just type “android SMS wrong contact” into Google’s search engine and see how many hits you get.  It’s astounding.  It’s happening. And Google seems to be ignoring it altogether,'' authorwjf wrote on December 23.

The severity of the problem is leading some to abandon their Android phones completely until Google issues a fix.

''Text messages to my girlfriend getting sent to my mom is NOT cool. I'm now carrying my old iPhone 3G while the Captivate sits on my desk, SIM-less, collecting dust. And my bank account is gearing up for an iPhone 5 purchase upon upgrade eligibility, unless this kind of crap is fixed,'' daniel.gleckler wrote earlier today.

Some users are also reporting that although SMS messages are being sent to the correct recipient, they are appearing in the wrong thread in the phone's messaging app.

Update: The bug has now been marked ''critical''. Credit to various commenters below for keeping an eye on the bug thread.