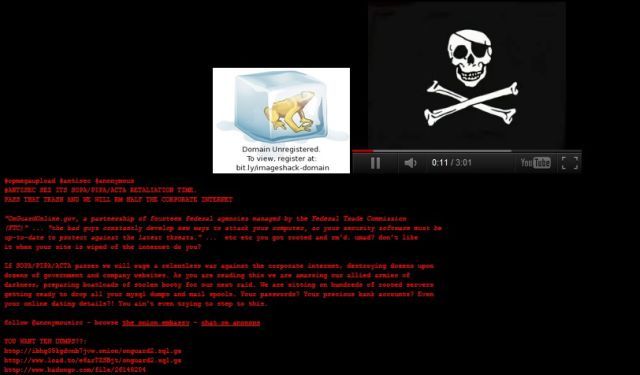 Anonymous is continuing to lead cyber attacks against various web sites. TheNextWeb.com reports that the newest victim is OnGuardOnline.gov, the official online security site of the US government's Federal Trade Commission. The hacker group not only launched a cyber attack against the site but defaced it with the Anonymous logo, a sound file and a message that warns of even more attacks to come.

The message basically states that if lawmakers try to vote the Stop Online Piracy Act and the Protect IP Act into law, " ... we will wage a relentless war against the corporate internet, destroying dozens upon dozens of government and company websites." The web site has now been taken down completely.

Anonymous has been waging its newest cyber war since Thursday when the US government shut down the Megaupload file sharing site. Anonymous hit a number of government and media trade organization web sites on that day including the official sites for the FBI and the Department of Justice. On Sunday the group apparently deleted the entire web site of the CBS TV network. The site was restored a few minutes later.