The latest in a long line of Snapchat hacks and exploits is seeing many users being sent mysterious photos of smoothies through the service, accompanied by a link to a website called Snapfroot. That page then redirects automatically to a recipe for a 'Berry Delicious' smoothie on AllRecipes.com.

The mysterious messages were first noticed late on Tuesday when the editor of Wired Magazine Joe Brown asked his Snapchat friends why they were all sending spam messages of photos of smoothies, only to find that none of them had sent such a message. Since then, many other Snapchat users have complained online of receiving similar messages on social networks such as Twitter. 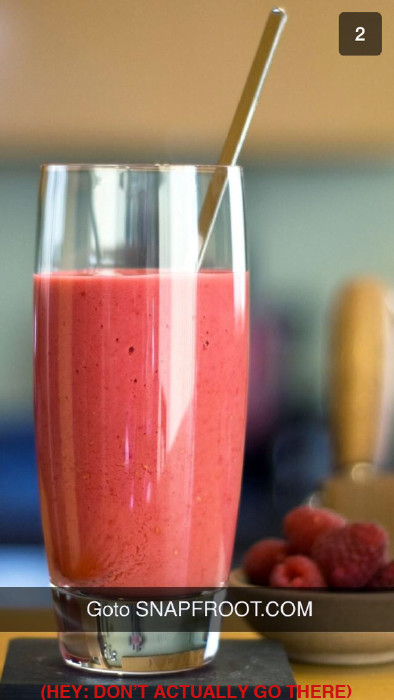 Many Snapchat users are reporting receiving photos of smoothies similar to this one with links to Snapfroot.com

After consulting Snapchat, Brown reported that the company had told him that the messages were first noticed by management a couple of days ago but that "We're not seeing any evidence of brute-force tactics." The company believes that the messages are sent from accounts "where someone has your email address and password and gets in on the first try." A Snapchat spokesperson added that the messages do not seem to be dangerous malware and are rather just an annoying, time-wasting joke or 'troll'.

Snapchat is apparently working to plug the leak but advises users to change their passwords in the meantime and not to enter their Snapchat usernames or passwords into third-party apps that request them, unless the app is well-known and trustworthy.