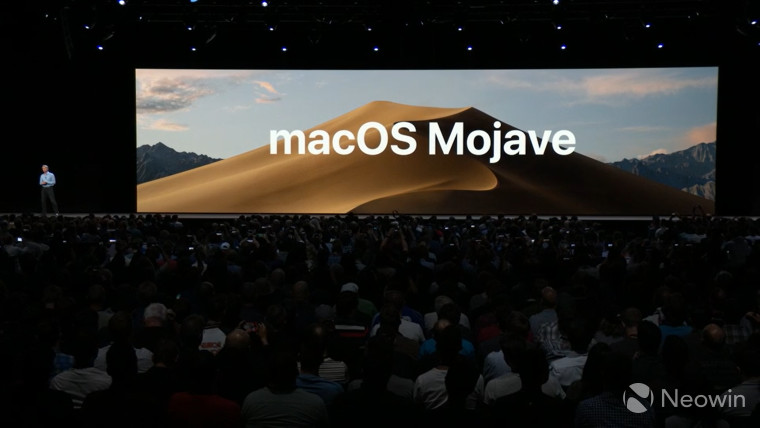 As expected, Apple announced macOS 10.14 at WWDC today. Apple seems to be done with mountain ranges and is now focusing on other beautiful landscapes across California, such as deserts, and hence the code-name, Mojave. Here's a quick rundown of some of the headline features.

Just as the leaks suggested, Apple has finally introduced a native, system-wide Dark Mode in Mojave. System menus and default apps like Finder, Xcode, Calendar, and Mail look great, with an updated neon colored theme for improved readability and contrast. Third-party apps may need to be updated to support Dark Mode, but it should be easy developers to do this in a time-efficient manner.

Mojave includes a new feature called Desktop Stacks, which helps organize desktop files into stacks, sorted by kind, date or even tags. Desktop Stacks keep themselves automatically updated, and it's easy to manipulate them by adding, removing or scrubbing through files. Mojave also adds a new feature called Dynamic Desktop, which automatically changes the desktop wallpaper depending on the time of the day.

Finder has received some useful 'quality of life' improvements too. First up is a new Gallery View mode, which includes a large preview of the currently selected file with thumbnails of the folder contents below. To supplement the Gallery View, and all other views, Finder now includes a new sidebar, which provides metadata and useful file information, depending on what's selected. For example, if a photo is selected, the sidebar shows the usual metadata such as file resolution, size, camera type, etc. The sidebar also includes a new Quick Actions bar, which is contextually aware, and user customizable. For example, if an image is selected, you can easily manipulate it or access markup tools.

Quick Look, originally introduced with macOS 10.5 'Leopard' is also receiving an update, allowing users to manipulate content (i.e., markup images, add digital signatures to PDF documents, trim videos, etc.) within the Quick Look environment itself. Finally, Mojave makes it easier to take screenshots, such as toggling between a window, full screen or a selection, or creating animations from videos playing on the screen and easily manipulating them.

Mojaves extends Continuity support to the camera, by making it easier to initiate taking a photo or a video right from the Mac, and being able to instantly add it to documents or other apps.

Mojave expands macOS' selection of native apps to include News, Stocks, Voice Recorder and Home apps. The new apps look similar to their redesigned counterparts on iOS 12 and are certainly a welcome addition. For example, the Home app should make it convenient to monitor your smart devices, such as baby monitors and cameras right from the Mac. Finally, Group FaceTime is also making a debut, exclusively on Mojave.

Mojave provides users with even more granular control of their private data and how they'd like to share it. In addition to API-level protections already in place for photos, contacts and other personal data, Mojave introduces protections for the microphone, camera, mail databases, user backups and message history as well. Safari also expands its security arsenal by introducing the ability to remove social media buttons from websites, and also limits 'fingerprinting', which should make it difficult for websites to track unique user information such as fonts and configuration settings.

7. Improvements to the Mac App Store

After improving the iOS App Store in iOS 11, Mojave focuses on revamping the App Store experience on macOS. The new App Store has been redesigned from the ground up with a brand new user interface, making it easier to navigate, discover and explore new apps. The new sidebar displays sections like Discover, Create, Work, Play and Develop, each with helpful recommendations and app suggestions on each theme. Finally, the new Categories section lets you easily browse through apps, look up reviews and access top charts. Other features borrowed from the iOS App Store include large screenshots and video previews, resulting in a much better browsing and app discovery experience.

Overall, Mojave seems to be a nice update that brings welcome usability and security features to the platform. The first beta of Mojave is out today for developers, and we should expect to see a public beta in the next few months.