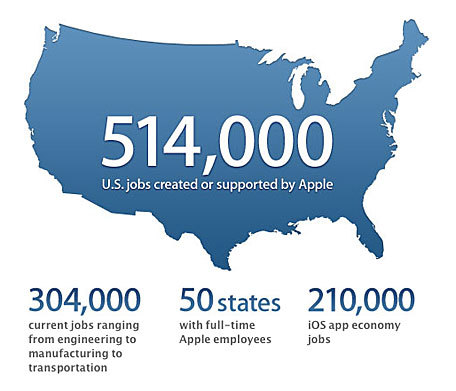 There's been a lot of criticism of Apple in the past several weeks about how the company seems to tolerate poor working conditions at the third party factories where devices like the iPhone and iPad are made. Apple has since announced that it is working to hold special audits at those plants to help change and improve the workers' life at those plants. However, those plants are located in overseas locations, mainly in Asia, and some have asked that Apple make more of their products in its home country of the US.

Now, in perhaps in an attempt to do more spin control, Apple has posted up a new page on its official web site that claims the company has been directly or indirectly responsible for creating 514,000 jobs in the US. It cites one study by Analysis Group that claims the company has 47,000 employees in the US. That same study also claims Apple is responsible for creating 257,000 jobs at third party companies, including those that make Apple-based device components, transportation workers, sales jobs and other positions.

In addition, Apple claims that 210,000 jobs have been made in the US as part of the iOS app economy that began with the launch of the iPhone in 2007. Apple adds that it has generated over $4 billion in in royalties to App Store developers (although its likely that some of that money went to developers working outside the US). Apple also claims that the job search web site indeed.com now lists over 5,000 iOS app developer jobs openings.