Apple has announced iOS 7 at WWDC and it will be the platform for the company's future iOS devices and that it will arrive later this year for existing and future devices. The OS will bring new icons, translucency, and updated navigation that will update the feel and flow of the OS.

The new transitions and color palette  provide a much needed refresh to the OS that had become stagnant since its introduction in terms of look and feel. With iOS 7, Apple recreated the visual flair of the site that should appease many of the critics who claimed that iOS was outdated. 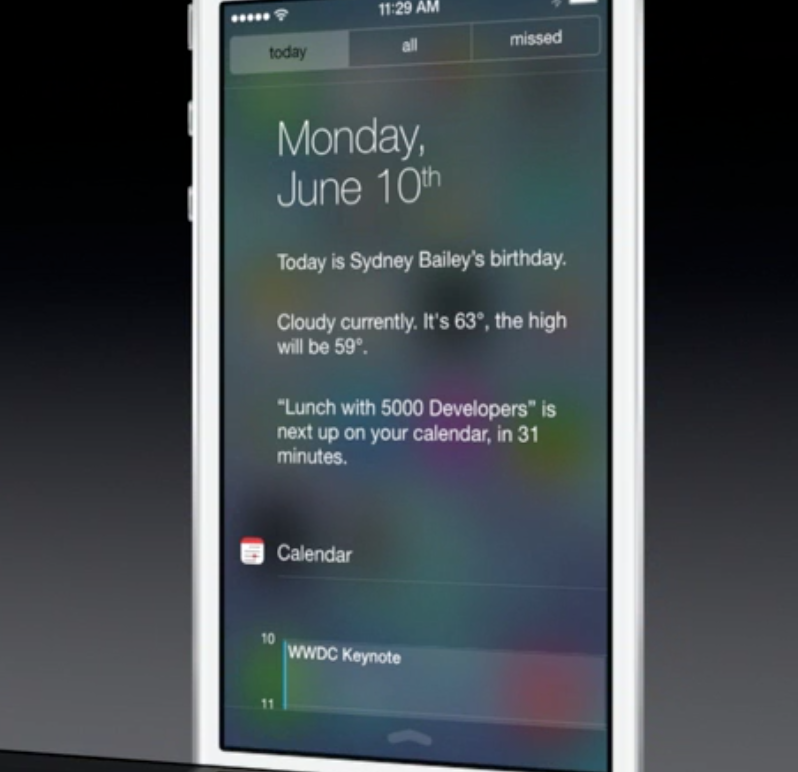 Apple calls it an 'end-to-end' redesign of the OS and is introducing 10 new features including control center (easy access to all phone controls) from any screen by swiping up from the bottom.

Multitasking is being updated and now any app can have true multitasking that Apple claims doesn't impact battery life; It also introduces a card like feature from webOS to move between applications.

Safari is being updated with new tabs, UI, parental controls. There are a bunch of other improvements for sharing links, bookmarks, and a reading list as well that polish out the update to Safari; there is also the ability to pick up where you left on Safari on your desktop with tab syncing.

AirDrop, as previously rumored, is coming to iOS 7 that will help you share content with those around you (who are running iOS 7 of course).

Camera app has been updated for iOS that introduces new filter options that give a live preview and brings with it a brand new UI.

The Photo app is also being overhauled and is categorized by 'Moments' to keep your never-ending scroll of images bit more neatly and easier to find. Apple is also making easier to share your photostream for those who you want to bombard with your iOS based memores.

iOS for the car has been introduced that will bring tighter integration between your car and your phone including the sharing of Siri.

The App store will also now update your applications automatically.

iOS 7 will bring a new music feature, called iTunes Radio that will help you find new music and create custom music radio stations. It's a Pandora like service that will be free and ad-supported but if you subscribe to iTunes match, there will be no ads.

There are also a bunch of other improvements like Facetime audio calling, per App VPN, message blocking, notification sync, and many more that Apple will talk about in detail at WWDC.