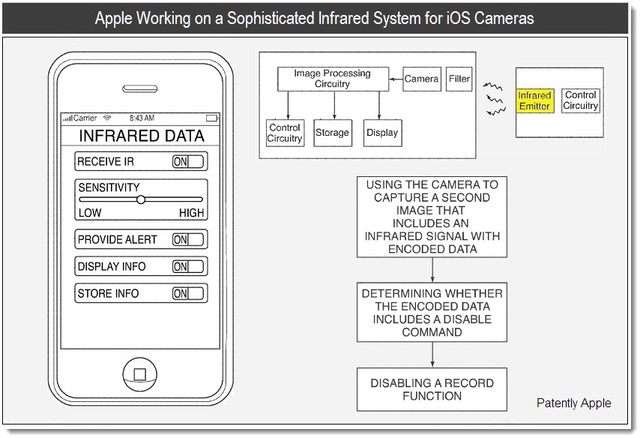 If the title sounds frightening, fret not - this new patent from Apple isn't a complete net loss of consumer conveniences. This patent, which was published by the United States Patent and Trademark Office last Thursday, does contain something the music and movie industries in America have been clamouring over - a way to stop people from using recording devices in movie theatres and concerts. Yes, even concerts.

The method used to put an end to shaky cam footage of movies and concerts making their way to video sharing sites is for the device to detect infrared signals in images processed by its camera. The infrared light, which is invisible to human eyes, contains encoded data that is decoded and read. If an image contains encoded data, the device can then either display certain information to the user, or manipulate a function on the phone - including shutting off the camera. If no such encoded data exists, the camera functions as usual.

Besides being an anti-piracy tool, the technology can also be very handy in acting as a virtual "tour guide" whenever a user approaches a hotspot. Information about an exhibit can appear at a museum, as shown in the following example. The user's device can display a warning upon entering a particular area. It may also be possible for certain places, such as hospitals and airplanes, to use this technology to automatically shut off cellular radios in iPhones.