As previously rumored, Apple unveiled a new Macbook Pro featuring a thinner design and Retina display. At its WWDC event today, Apple revealed the new MacBook Pro, as well as updates to its current MacBook Air and MacBook Pro models. The new MacBook models feature Intel's Ivy Bridge processor and support for USB 3.0. All the new models are available today. 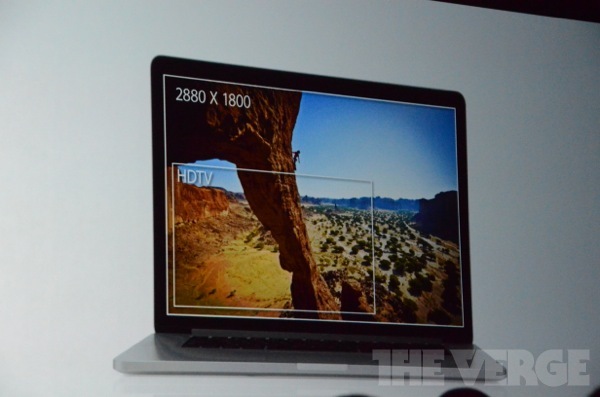 The new 15.4-inch MacBook Pro, which Apple called its "next-generation" model, is a mere 0.71-inches thin, making it nearly as thin as the company's MacBook Air ultraportable laptops, which are 0.65-inches thin. Additionally, the new MacBook Pro is Apple's lightest MacBook Pro model yet, weighing just 4.46 lbs. The company is also including a 2800x1800-resolution Retina display the new laptop, making it the highest-resolution notebook display on the market.

In addition to the new design, the MacBook Pro will feature powerful hardware. The base model, which starts at $2,199, will feature a 2.3GHz quad-core Intel i7 processor, NVIDIA's 1GB Kepler-based GeForce GT 650M GPU, 8GM of RAM and 256GB of flash storage. The laptop eschews traditional hard drives entirely, instead only offering flash storage of up to 768GB. USB 3.0 is included in the new model, as is Apple's typical Thunderbolt support. 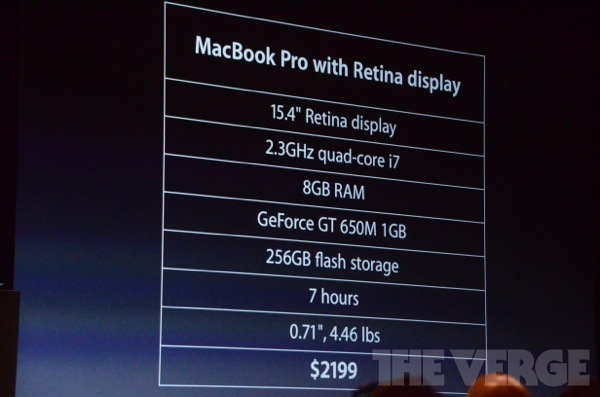 Developers will have to update their programs to support the full resolution of the display. At the unveiling of the new MacBook Pro at WWDC, Apple announced it was working with software developers such as Adobe and Blizzard to take advantage of the increased resolution and showed examples of Adobe Photoshop and Diablo III running on the higher-resolution display.

The refreshed MacBook Air also saw a slight price drop, with the 11-inch model now starting at $999 and the 13-inch model beginning at $1,099.