The Apple Watch Series 5 is an iterative improvement over last year's Series 4, which was the first major refresh since the first generation. The big new feature is that it includes an always-on display, and a somewhat minor new feature, a compass. But that's about it.

And that's OK. The Apple Watch is a pretty mature product now, making it the only mature smartwatch on the market.

The Apple Watch Series 5 is the fourth model that I've purchased. I bought the original Apple Watch Sport (Apple used to call the aluminum model 'Sport'), and then I went with stainless steel for the Series 2. I skipped the Series 3 and went all-in on the big redesign with the Series 4. So why did I go for the minor refresh that is the Series 5? Well, mainly because in my review of the Series 4 last year, I predicted that after five generations of not having one, the Series 5 would be the one with an always-on display, and it is. Go ahead and click the link above and skip to the section called "An ambient future".

Not much has changed since last year, and that's fine. It's still the best smartwatch on the market.

The Apple Watch Series 5 actually starts at $399, for the 40mm Wi-Fi + GPS model, and you can get the 44mm one for $429. It's $100 more for either one if you want cellular. The stainless steel one will run you $699 or $749 for the 40mm and 44mm models, respectively, but those only come in cellular variants. The price also goes up if you choose anything other than a Sport band or loop.

Apple's bands are also very expensive. You can get anything that you want for much cheaper on Amazon from a third-party seller; however, you should definitely check reviews before you buy.

And if stainless steel isn't high-end enough for you, you can go for the titanium or ceramic variants of the Apple Watch Edition, which start at $799 and $1,299, respectively.

The Apple Watch Series 5 looks exactly like the Series 4. Apple always provides its customers with a way for it to look like the new one though, which can be with something simple like a red ring on the crown instead of a red dot, or a new color for the chassis. This time though, that all comes from the always-on display, or you can shell out big bucks for the Apple Watch Edition. 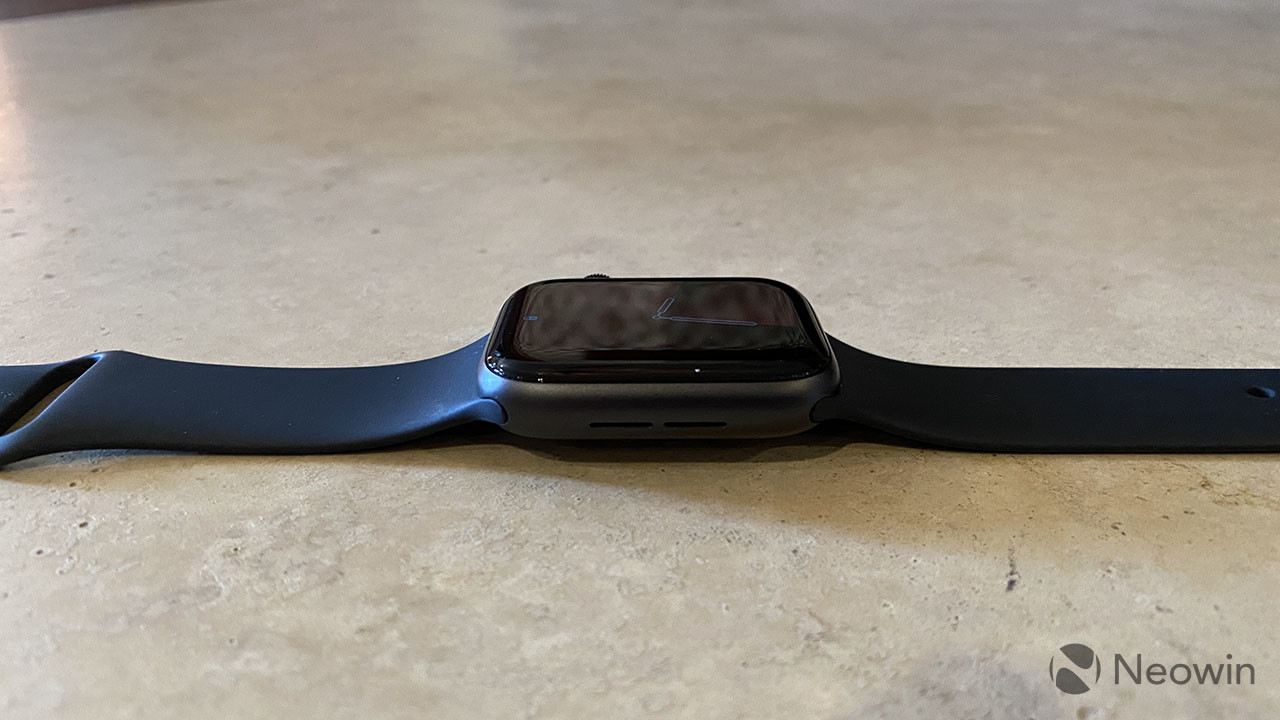 It's still 44x38x10.7mm, so the dimensions of the body are exactly the same as they were before. It's still a rectangle with rounded corners, making it the only mainstream smartwatch that hasn't moved to a circular display. We'll talk more about that later though. 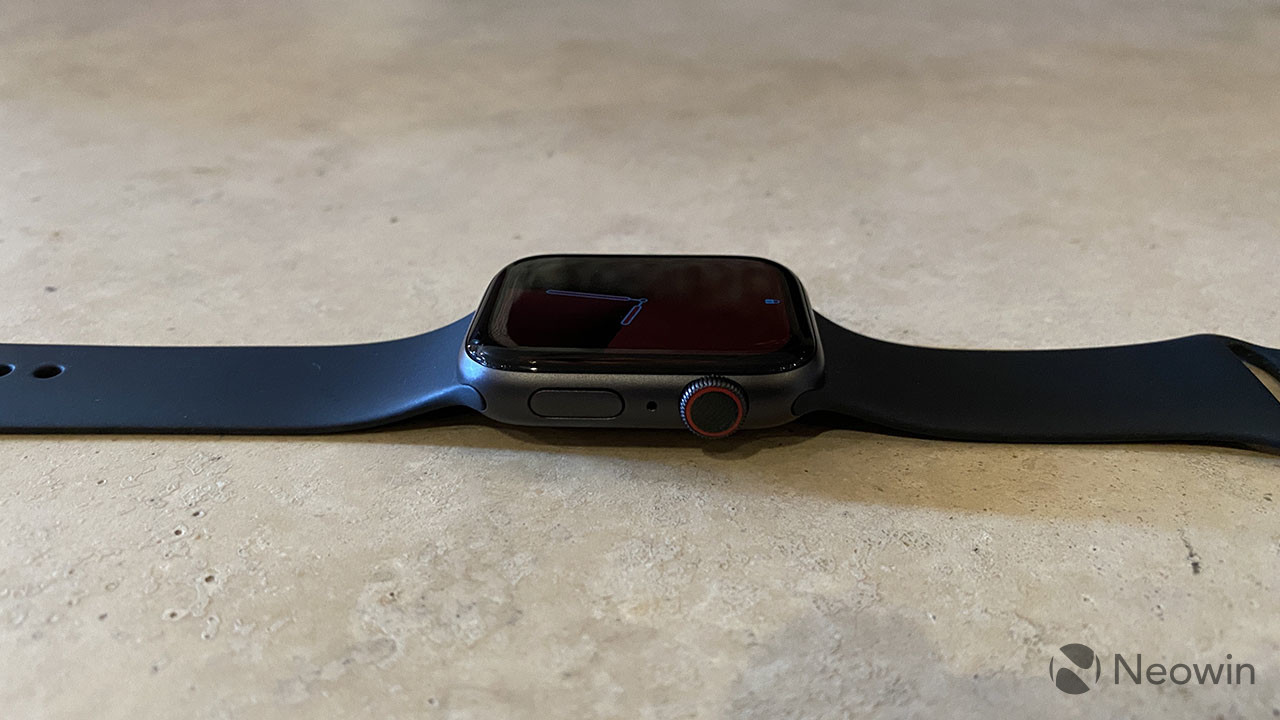 On the right side, you'll find the digital crown, which has a red ring on it if you've got the cellular model. Below that is a button, which you can use to power on and off the Watch. You can also tap the bottom button to bring up the multitasking screen, and you can double-tap it for Apple Pay.

The digital crown, on the other hand, is the main button that you'll interact with. You can use it as a home button, as a toggle between the all apps screen and the watch face, and you can turn the crown to scroll or zoom. 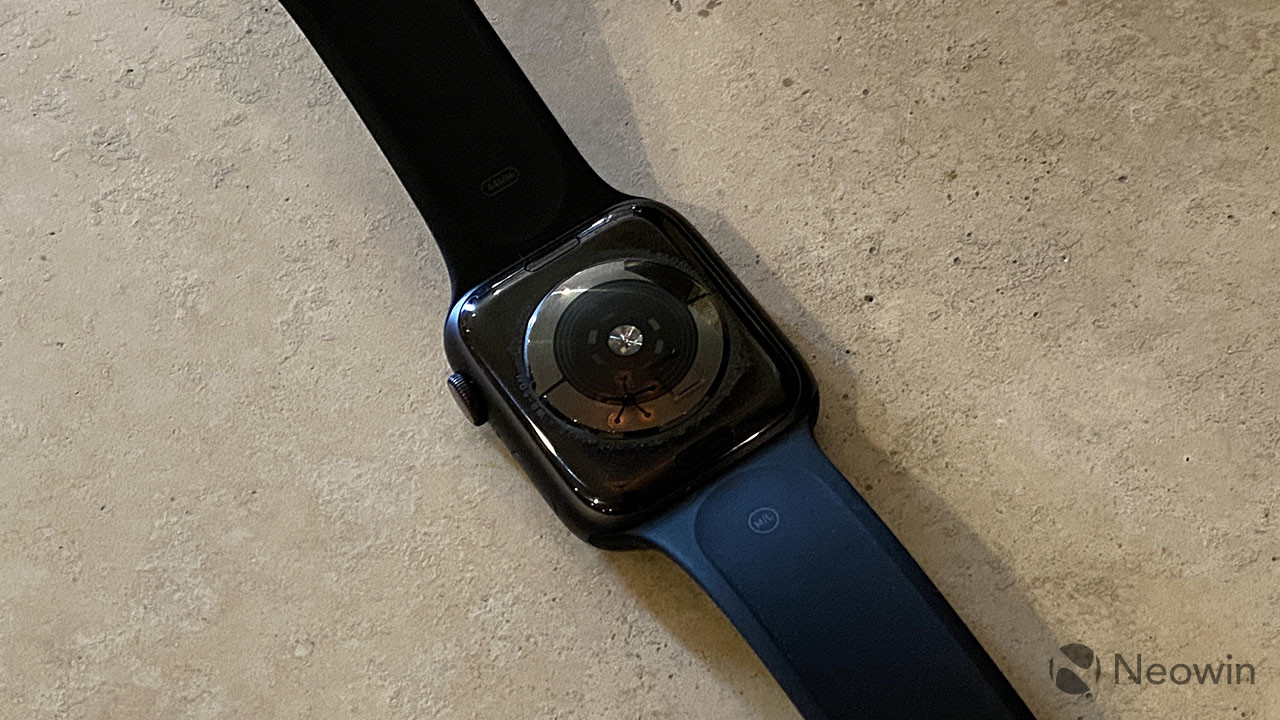 On the bottom of the Watch, there's a heart rate sensor. You'll also find two buttons down there that you can use to release the bands. Apple has a great way of swapping out bands on its Watch products. You can just slide them into place, and press the button on either side to slide them out.

You'll probably want to have a collection of watch bands. I can tell you that I like to swap them out on occasion. I recommend getting the Sport Band or a Sport Loop. Things like the Milanese Loop look nice, but you'll inevitably find yourself doing some activity where it just comes loose. Also, Apple sells the Sport options for $49. Milanese Loop is $99, a Link Bracelet can run you up to $449, and so on. It gets expensive. Like I said earlier, just check out Amazon.

The Apple Watch Series 5 comes with 40mm and 44mm displays, and they both have a 326ppi pixel density. That used to be Apple's definition of retina for phones, until it started producing iPhones in Plus, Pro, and Max models. 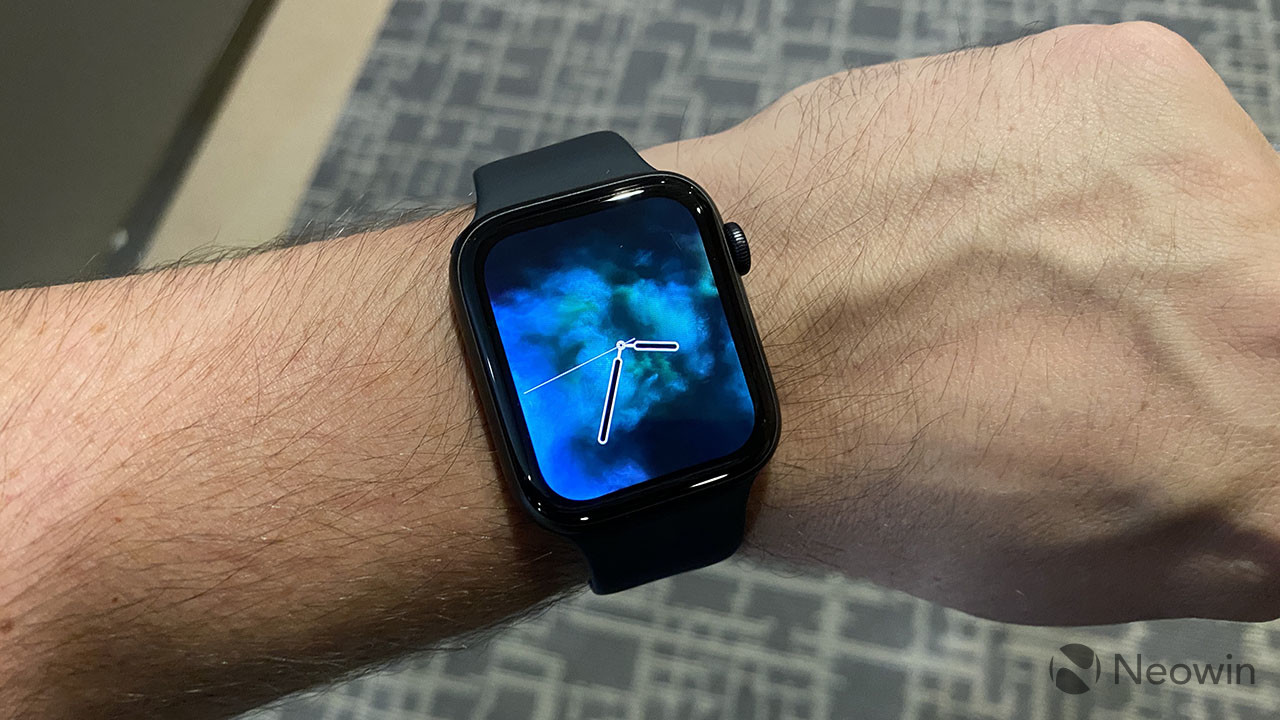 Like last year, it's an LTPO AMOLED display, LTPO standing for low-temperature polycrystalline oxide, and AMOLED meaning active-matrix organic light-emitting diodes. The screen is more power-efficient, and since it's OLED, you get true blacks, something that's necessary for a smartwatch and particularly an always-on display. 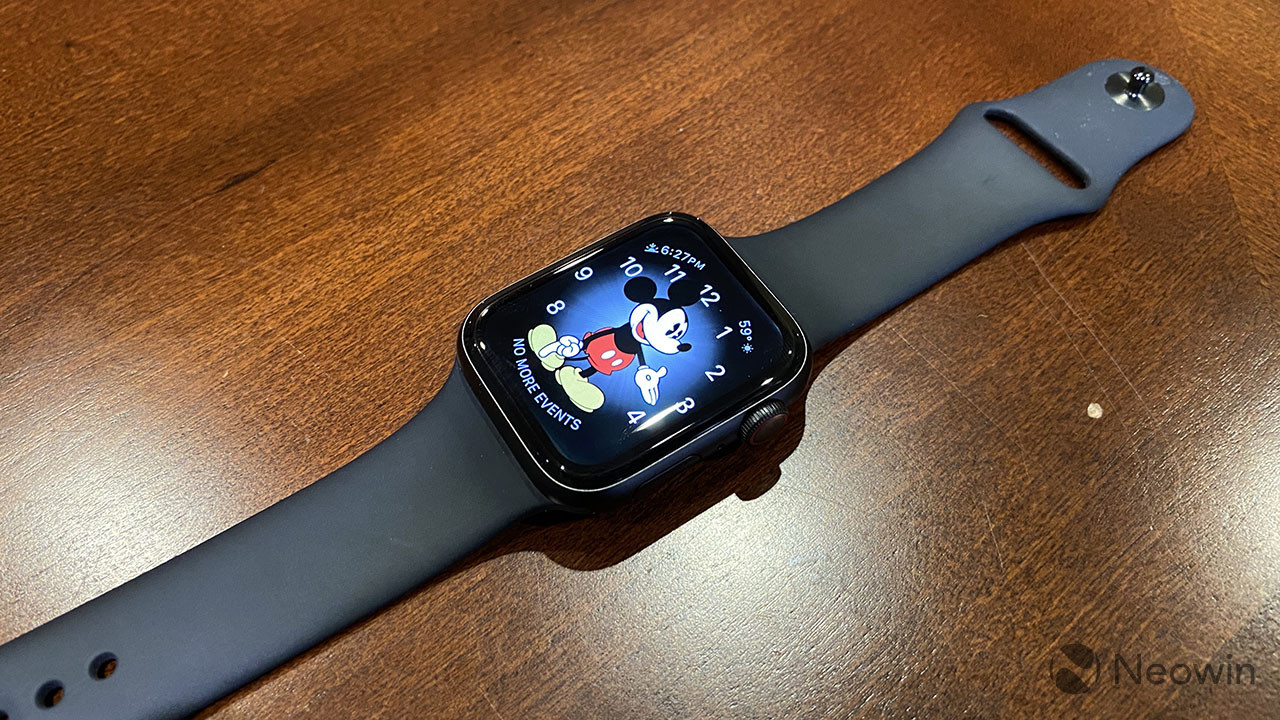 And that always-on display is the key new feature of this device. It's something that every Wear OS smartwatch has offered since it was originally introduced as Android Wear back in 2014, nearly six months before the original Apple Watch was even introduced. 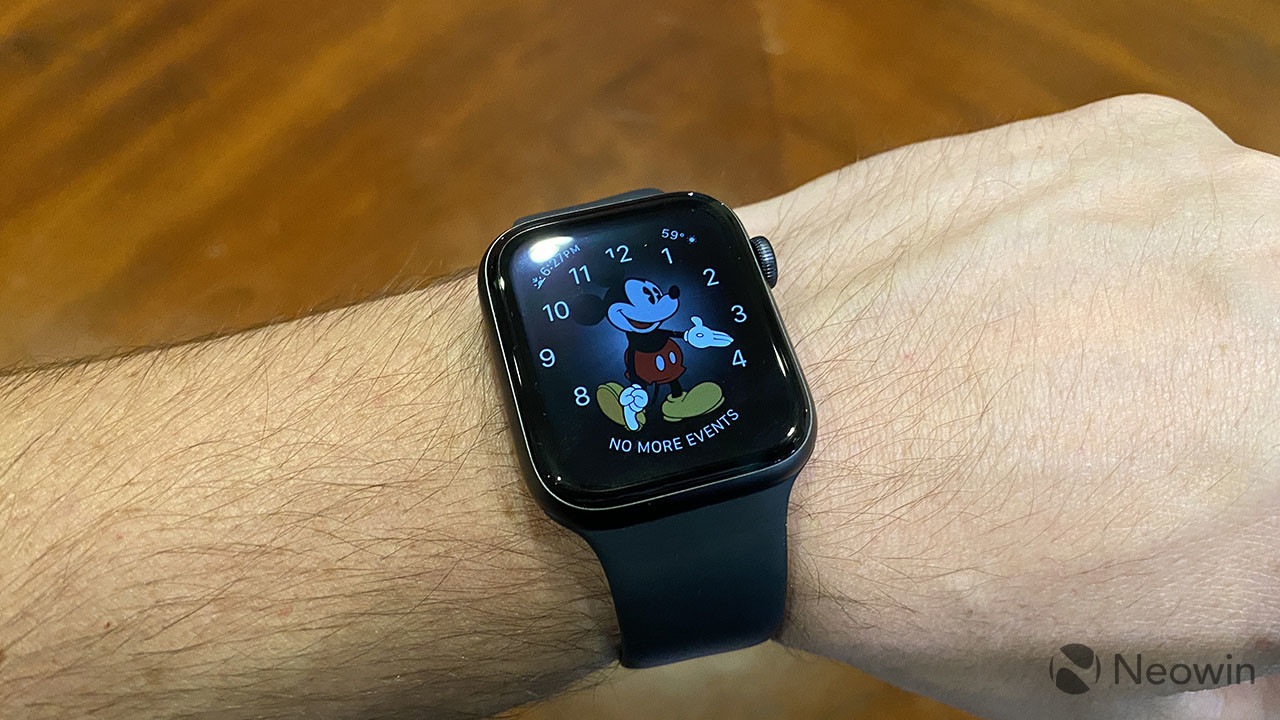 Apple says that the screen can have a refresh rate of between 60Hz and 1Hz. The way it works is that it essentially dims the screen, and moving parts stop moving. For example, if you're using the Mickey Mouse watch face, Mickey doesn't tap his foot when he's on the always-on display. 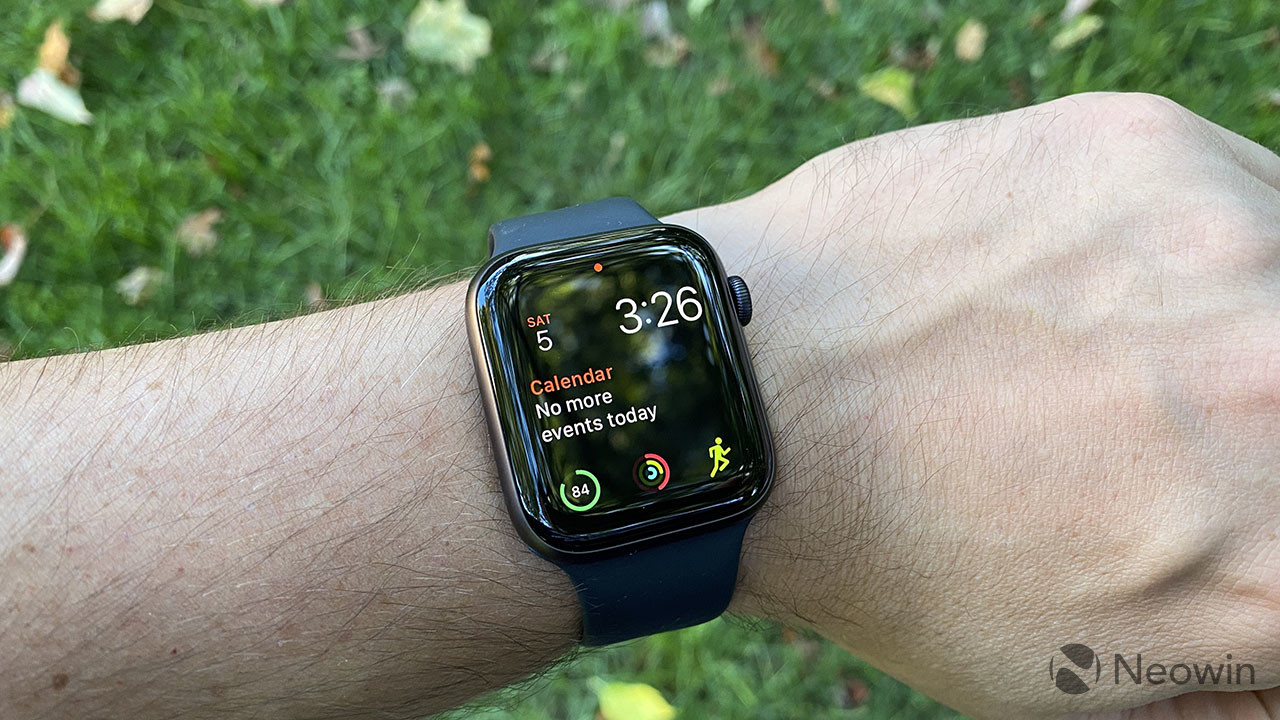 What you see on the ambient display depends on the watch face. Most of them are just dimmer versions, such as the Modular face which is my preferred watch face. Others, such as Vapor, Fire, and Water, will only show you the clock on the always-on display, since the rest of the watch face consists of moving parts. 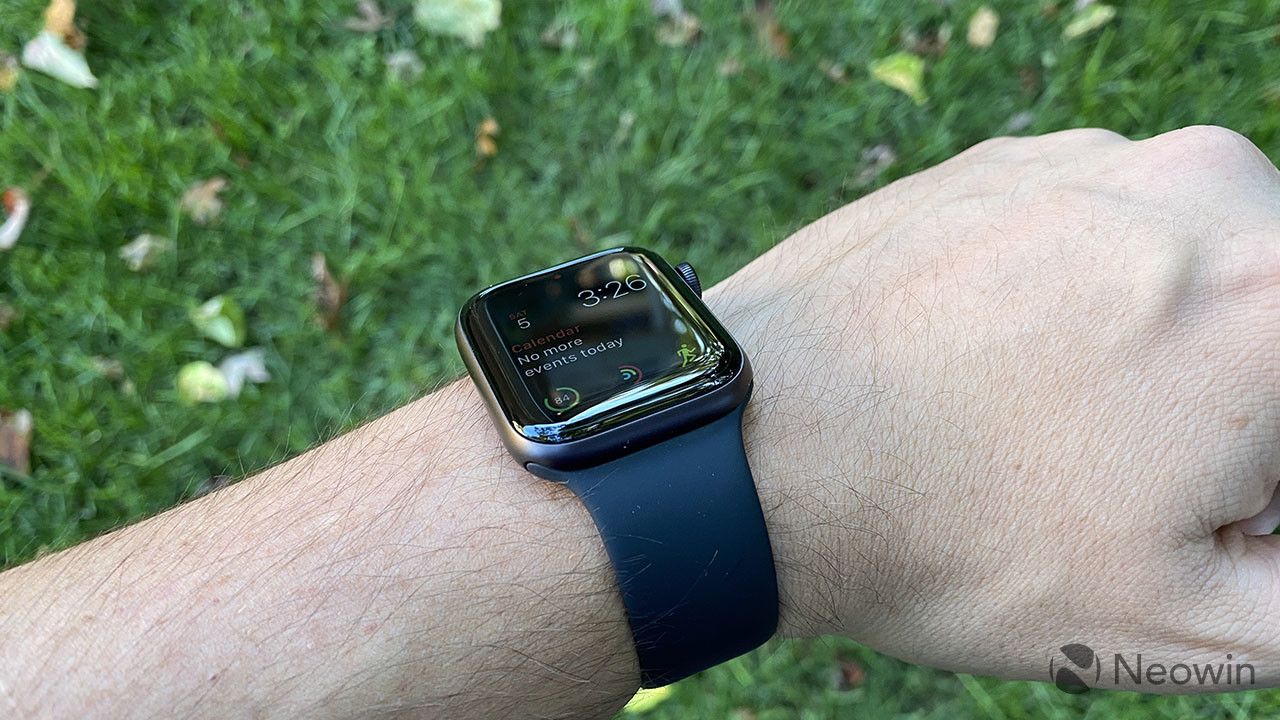 It's actually a more sophisticated always-on display than what's offered by the competition. It's in full color, a rarity when it comes to ambient displays on smartwatches. I'm guessing that this is what Apple was waiting for in taking so long to do this, meaning the ability to dim down the existing watch face without crippling the battery life.

As far as Wear OS goes, Qualcomm's newest chipset, the Snapdragon Wear 3100, allows for some color on the ambient display, and a moving second-hand. However, it's actually pretty hard to find a watch face that actually supports these things, since most Wear OS watches don't have a Snapdragon Wear 3100.

There's one other feature of the always-on display, which is that it acts completely different if it's showing anything on the screen other than the watch face. For example, if it goes to sleep while showing a notification or while media controls are showing, it has it shows a translucent overlay with just the time shown digitally.

While I applaud Apple's ability to create a full-color always-on display, I don't always like it. It doesn't feel like it gets out of the way, as an ambient screen should. I wish I could adjust the brightness of the ambient screen, but that's not an option. Apple does provide a theater mode though, which shuts off the watch face until you turn it on again. You can also turn off the always-on display completely.

The point of an always-on display on a smartwatch is so that you can always see the time and key information. Previously, it was necessary to raise the watch to wake it up.

Last year, the performance of the Apple Watch Series 4 blew me away, as I was coming from a Series 2. The S4 chip made a meaningful difference. With the Series 2, I would launch apps and the Watch would go to sleep before the app even loaded. With the Series 4, apps launched quickly.

Performance on the Series 5 is the same. Not only is it fast, but it's easily the fastest smartwatch on the market. Qualcomm's Snapdragon Wear 3100 is still based on ARM Cortex-A7, which has been used since those original Android Wear watches in 2014 with the Snapdragon 400. In those five years, Apple has been working on meaningful improvements with its custom chipsets.

Battery life really hasn't changed either, surprisingly enough. You'll still need to charge it at night, which is fine since it doesn't do sleep tracking. But after wearing it all day with the ambient display on, it was still at 30-40% when I put it on the charger at night. 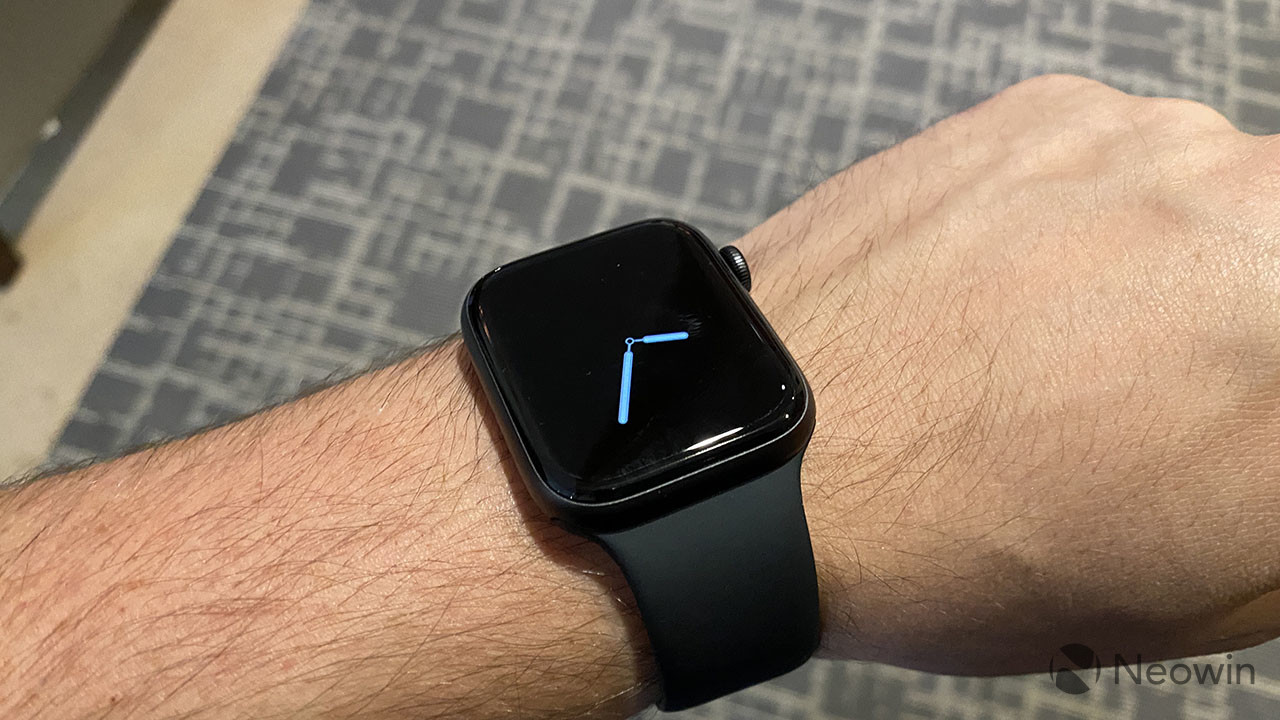 I went with the cellular model, and this is something you'll want to think about when buying the Apple Watch. It costs $100 more for cellular, and most carriers will charge you around $10 per month for it. It's great at the gym, where I can use Apple Music for streaming, along with Bluetooth headphones. Apple also has a Podcasts app in watchOS now, so you can stream that as well.

Of course, it's also good for getting notifications when you don't have your phone with you. But before you buy one, just put some thought into how often you won't have your phone with you. I'll usually bring my phone with me to the gym and watch Netflix on the treadmill or something, so if I'm only actually using the Apple Watch's cellular capabilities one or two times a month for an hour of streaming music, that $10 fee per month certainly isn't worth it.

It ships with watchOS 6, just as you'd expect. That means that it has its own App Store, so you can now install apps without putting them on your phone first. There's also a new Noise app, which will tell you if you're in an environment that can damage your hearing (spoiler: you'll know it by how uncomfortable your ears are).

The Apple Watch is the best smartwatch on the market. There's pretty much no way around that. It's a phenomenal device, with great performance, a beautiful display, and now, an always-on display. The battery life is consistent, and watchOS is a mature platform at this point. 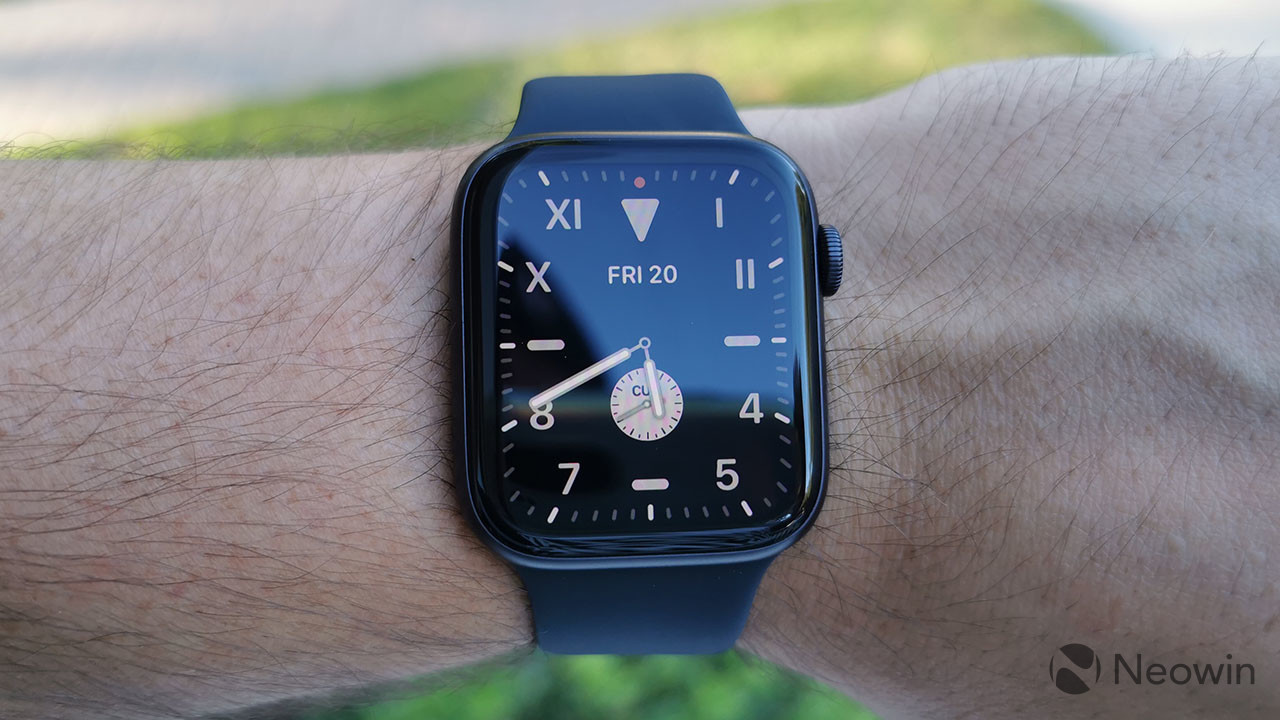 The biggest drawback is that it only works with iPhones, and when I say that, I mean it locks you into the Apple ecosystem. A smartwatch probably isn't something you'll want to upgrade as often as your phone, so if you buy this, be sure your next phone will be an iPhone. Remember, Wear OS smartwatches work with iPhones too, and some of them are pretty good, albeit not as good as an Apple Watch.

If you're using a Series 4, the Series 5 isn't worth the upgrade unless you really want that always-on display. That's probably why Apple chose to only sell the Series 3 and the Series 5, discontinuing the Series 4. If you've got something older like a Series 3, you might want to consider it. If you've got a Series 2 or older, you should totally upgrade now. 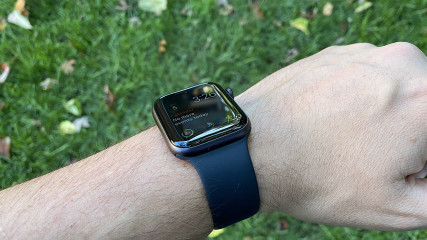 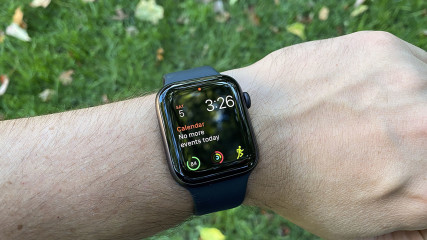 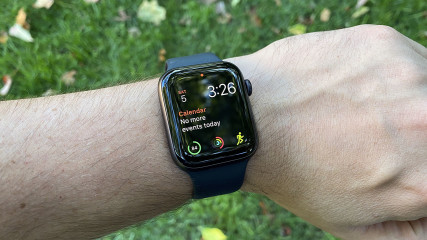 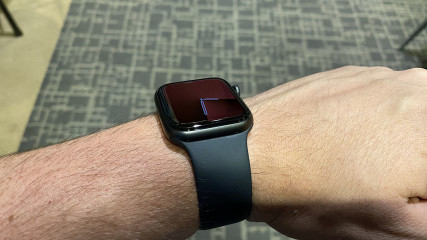 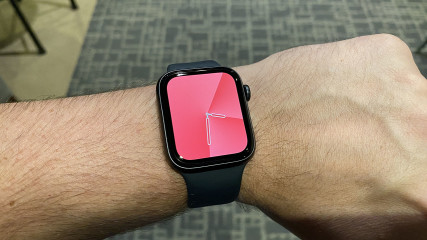 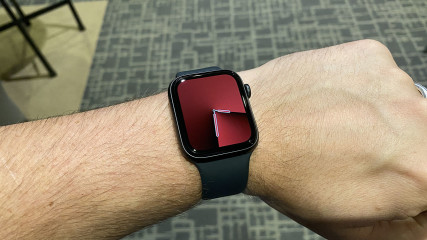 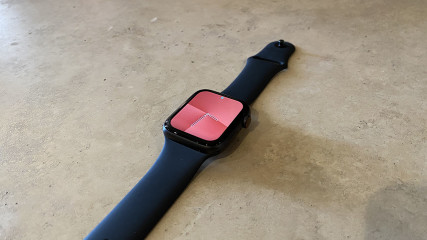 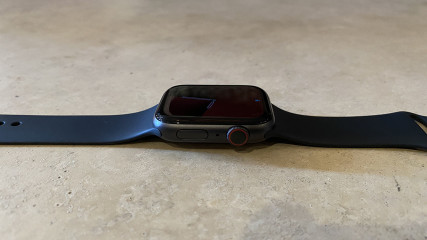 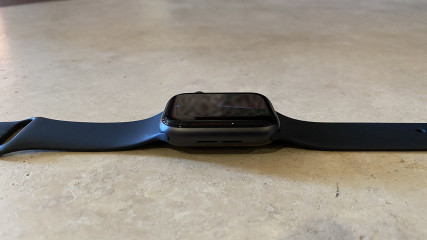 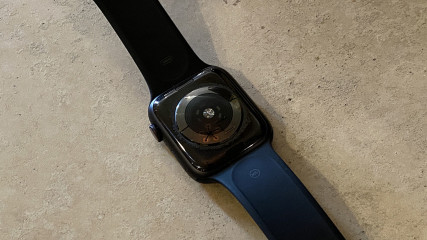 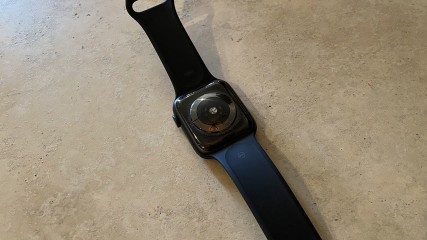 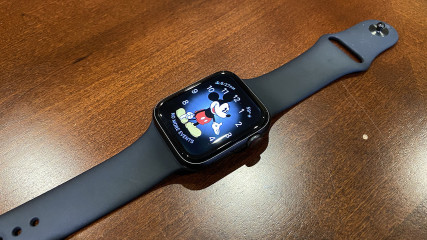 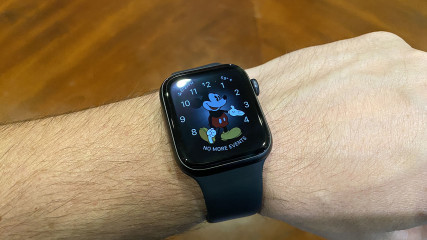 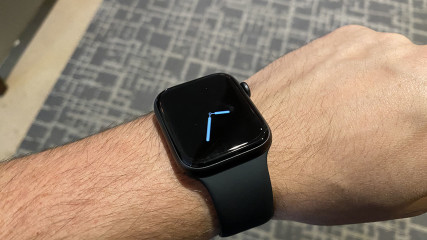 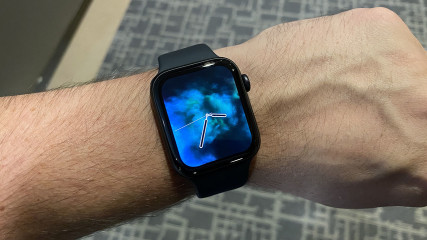 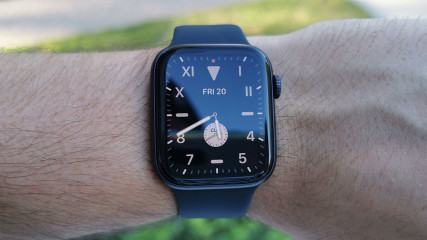