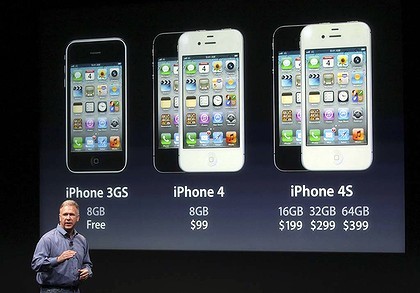 As the world waited for the iPhone 5, Apple today delivered a product that appears to have disappointed many.

With rumors flying around that the iPhone 5 would come with a new teardrop design, Apple fans were informed at the Apple press event in Cupertino that in fact there would be no iPhone 5 today (or perhaps even this year) and that they would instead release an upgraded version of the 4 – the iPhone 4S. The 4S is the same design as the 4 however “don’t be deceived, because inside it’s all new”.

With the announcement of the 4S, Apple stocks dropped as much as 3.5% whilst Microsoft stock rose 3.3% - if Microsoft ever had a chance in the smartphone market, now is the chance to take advantage. With Apple shareholders clearly not overly excited by the 4S, it leaves one to question how much Windows Phone and Android are set to benefit. With Microsoft having just released their new Mango update and with more new WP7.5 devices rumored for release later this month, it will definitely show a great deal about the consumers’ reaction to the relatively infant operating system.

HTC reported earlier this week that WP made up 30% of its sales and with many OEM’s only starting to get on board with Mango, if they get produce similar sales results to HTC, then Microsoft will have succeeded in making a thriving mobile platform.