With the rise of the 2-in-1, and almost all the major companies adopting the form factor in the past couple of months, I believe it's time to revisit Tim Cook's famous words about them. While Cook had once criticised Microsoft's device strategy as being jumbled up and akin to slapping a toaster on a fridge, it seems that Apple is now the one guilty of that same transgression.

No doubt, when Windows 8 and the Surface Pro first debuted, there were some major quirks that needed to be addressed and Microsoft has, for the most part, made improvements that mostly solve those problems. Windows 10 brought back the Start Menu and introduced a unified Store and Universal apps along with a myriad of under the hood improvements. All of these make Windows a formidable platform for not just touch screen devices - as Windows 8 aimed to be - but also for users with mice and keyboards. It finally works well both ways, whether you're using just the tablet part of the device or whether you've got the keyboard snapped on. They finally serve a function making a 2-in-1 device much more productive than a simple tablet with a third-party Bluetooth keyboard; this is facilitated by innovative features like Continuum, dynamic resizing and the flexibility, in terms of UI, of Universal Apps.

I think if you're looking at a PC, why would you buy a PC anymore? No really, why would you buy one?And, though he may deny it as vehemently as he can, these are the very devices Cook is pitting his latest creation against. Though he may insist time and again that a tablet and a PC are separate, the fact that he now considers an iPad Pro a suitable replacement for your PC means, by extension, that he believes the two are converging in terms of their capabilities and their usage. He may not want to fuse OS X and iOS but he is definitely making a play to make iOS work more like OS X. The approach may be different from Microsoft's but the end goal is the same. He may not say it in so many words but the iPad Pro is the 'tablet that can replace your laptop'. Not just that, it's supposed to do so for the most demanding of users: professionals.

This is precisely where Apple falls short. Accompanying Microsoft's pilgrimage to the land of convergence was the great Windows 8 experiment, where Microsoft basically upended the entire operating system and made sweeping changes to large parts of the UI. iOS, on the other hand, is almost exactly the same and, yet, Apple expects the use case of its devices to change tremendously without making any significant changes to the OS itself. That, by itself, is an oxymoron.

What has changed, then? What truly separates an iPad Pro from an iPad Air? It's larger, has a keyboard and a stylus. The larger screen is sure to come in handy for media consumption but, for professionals - the more important dynamic in this case - it also provides a more expansive working space. As someone who just moved from a 15-inch laptop to a 34-inch ultrawide I can certainly appreciate that. 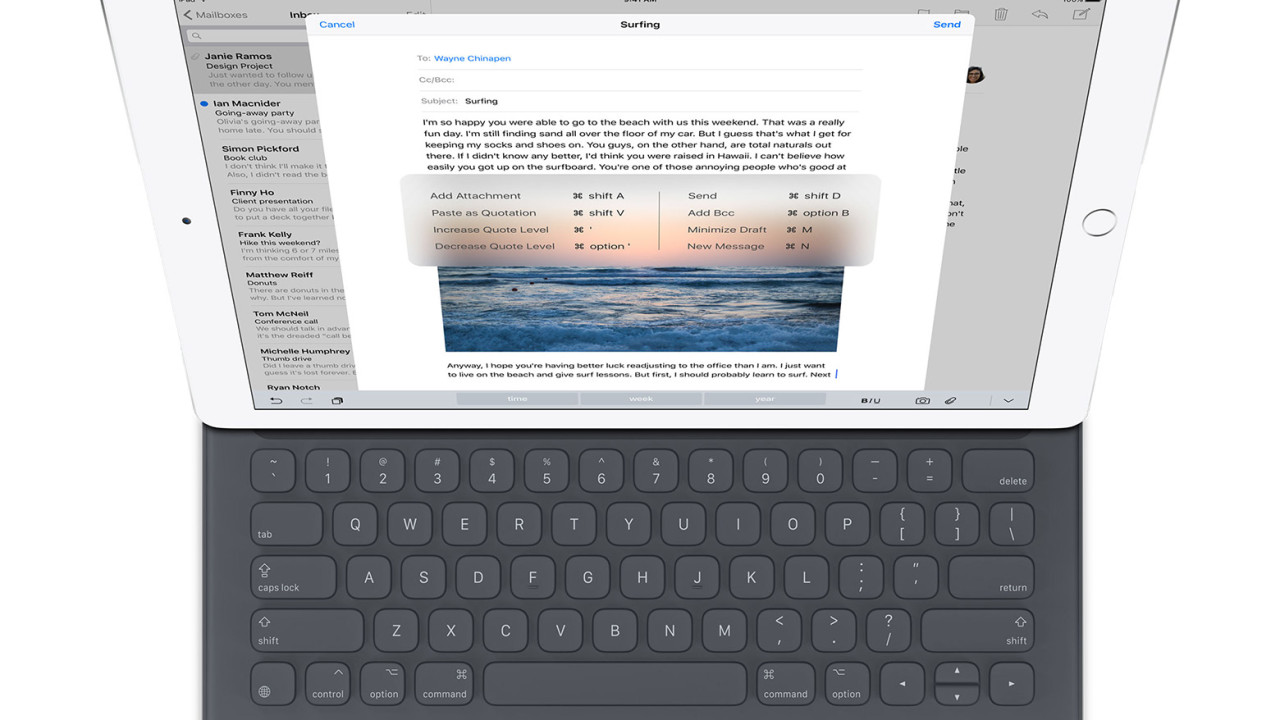 Another problem is that, comparatively, Microsoft's ecosystem is far more sophisticated if you really want to do anything artistic. On one hand, the Apple Pencil has been defined as best-in-class by most people who've used it, calling it out for not just the usual features that most digital pens have on the market today but also for the ability to detect the angle at which you're writing, making for a much more realistic writing experience. On the other hand, despite the hardware being the best on the market, the software, once again, isn't exactly hoisting the platform and enabling content creators to do as much as others. While Apple is just coming to the market, Microsoft has been playing around with styli for decades. Many of the more popular applications have already added support for Microsoft's new pen APIs. Windows can also read your handwriting and use it as a form of text input. iOS 9? Not so much. Yes, the iPad Pro is a replacement for a notebook or a desktop for many, many people. They will start using it and conclude they no longer need to use anything else, other than their phones

Sure, Adobe has a massive library of apps that, even if disjointed, can mostly make up for a similar experience to Photoshop on the desktop and present an incredible platform for an artist to avail. Using the Adobe ecosystem on iOS, however, requires you to move between multiple apps while you're working, instead of the comparatively omnipotent jack-of-all-trades Photoshop application. In many cases, even artists will defer back to a desktop for the final touches after they've created their sketch. With a PC, you can do both. With an iPad Pro, not so much.

Further compounding the problem is the fact that both users and developers alike have normally approached an iPad as a consumption device. Most apps you'll find in the App Store sit within the $1-5 range. Some are more expensive, yes, but the majority of users are not at all accustomed to the prices of well over $100 that most professional suites command on a full-blown desktop OS. What this means is that while the iPad Pro not only has a dearth of productivity focused apps compared to Windows, but developers are also not particularly hopeful that their wares will, in fact, sell on the device.

As the linked article points out, developers have very valid concerns regarding the immensely low prices that are prevalent in the App Store. Then, there are other restrictions placed by Apple, such as the lack of free trials, which make a $100+ purchase even more daunting than it already is. The co-founder of Sketch, for example, had this to say in a recent interview:

Yes, it has a beautiful screen, but there's more to consider. Apps on iOS sell for unsustainably low prices due to the lack of trials. We cannot port Sketch to the iPad if we have no reasonable expectation of earning back on our investment.

That's not to say that these issues cannot, or will not, be solved. Some of the problems are, in fact, quite basic and would only require Apple to make minimal changes to the way they operate the App Store. Whether the company will agree to modify its heavily restricted App Store is, of course, another matter. 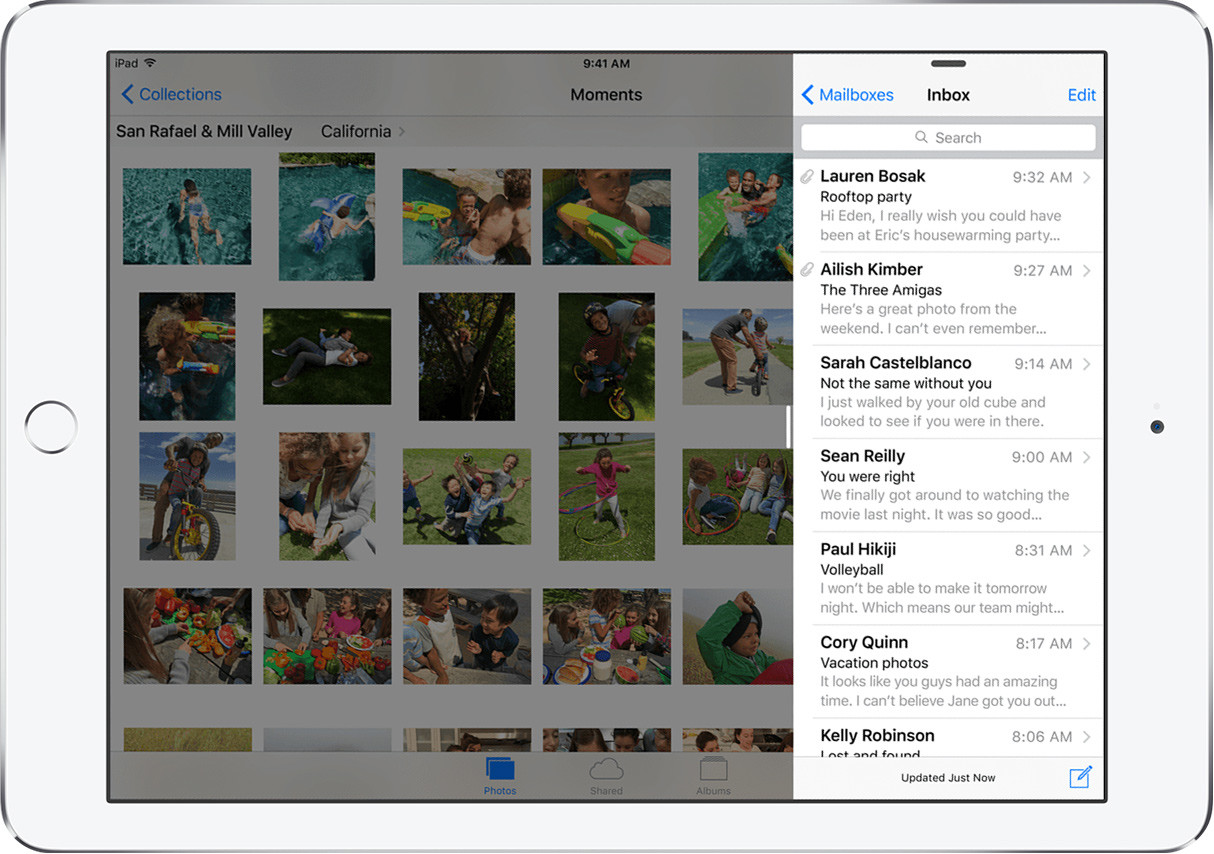 Apple is also not just sitting idly by. Partnerships with the likes of Big Blue and Adobe are certainly bringing a wealth of enterprise- and prosumer-oriented applications to the platform, but such successes are, at the moment, few and far between, with the new partnerships not having been fully vested. This will certainly change in the next 2-3 years and the iPad Pro (or whatever it's successor three years down the road is called) could be a formidable powerhouse by then - if not due to these partnerships, then due to the sheer clout Apple has in the tech world - but judging current products on future achievements is naive.

Last but not least comes the issue of power. Is a mobile device powerful enough to even have a shot against a full-PC? Thanks to Apple's many innovations in this field, that is finally a reality, almost. When comparing the performance of an A9X-powered iPad Pro to leading Ultrabooks today, the iPad even manages a healthy lead in some benchmarks. But, bring in something like an i3 or i5 processor and the iPad Pro can barely keep up, if even that.

Even if it could run, say, Photoshop better than a full PC, the fact is, at the moment, there is nothing on the App Store that even comes close to giving you the editing abilities that something like Photoshop can. Adobe Premiere? Handbrake? Audacity? AutoCAD? Full versions of Word, PowerPoint and Excel, with things like Macros and add-ons? Database managers like Access? The too-numerous-to-mention enterprise software tailored to specific organisations? More power is all good and fun but without the software to make use of it, what use is it, indeed?

You can converge a toaster and a refrigerator, but those things are probably not going be pleasing to the user.All those applications are not only found on Windows but you also have a dozen alternatives. From day one, Apple has marketed the iPad as a consumption device and while enterprising developers have tried to push the limits of what an iPad can do, they've mostly stuck with the broad use case. Adding a keyboard and a stylus doesn't change the fact that from a software point of view, iPad Pro does nothing better than an iPad Air with a third-party Bluetooth keyboard - ironically, you'd actually even save a lot of money if you went for a third party keyboard instead of Apple's Smart Cover.

It is then apparent that while the popularity of 2-in-1's has incited Apple to adopt their form factor, its OS is just not ready for the market that such a form factor is aimed at. They have an OS made for consumption being shipped in a device aimed at professionals. For the first time, Apple's hardware and software are opposing, instead of complementing, one another. Therefore, in my view, Apple is now the one with the toaster and refrigerator problem.

Does it really make sense for you to spend over a $1,000 on an iPad Pro when you could just as well buy a Surface Pro 4 or a well-specced PC/MacBook for the same price? With productivity in mind, the latter not only offer a more robust set of features but also a far more mature ecosystem.

Apart from drawing, the iPad Pro offers no substantial advantages to professionals over a proper PC or, in fact, even a normal iPad. The larger screen is obviously useful but that will probably end up being a personal preference. On the other hand, any of the dozen other Windows-powered 2-in-1's that have been announced in just the last 6 months can offer so much more, from the millions of desktop applications, to the flexibility of being able to choose from fully fledged x86 apps and Windows Store apps. Apple has made a 2-in-1 device but its OS is still heavily leaning to one of those sides. It is, in essence, a reflection of precisely the same quagmire that Microsoft found itself in when they first announced the Surface line.

Arguing for - what is essentially - a glorified tablet being able to mimic a PC makes Cook look shortsighted; as the only way that would be possible, is if the person was already satisfied with the normal iPad; because disregarding the niche of pen input, not much has changed and one device is simply the other, stretched out a bit.

The conclusion of this piece brings me back to a phrase I've used quite a few times now: "not so much." What benefits does an iPad Pro bring to a content creator over a regular iPad? What does it give to a movie maker that a similarly priced Windows-powered 2-in-1 can't? Not so much.