Both Gartner and the IDC are well respected organisations, both providing market research and analysis around the IT world as a whole, from desktop PC sales to broadband usage statistics. When they release facts or figures it generally dictates how a technology or product will perform over the next calendar year.

So, if you’re Apple, you’re going to be a little confused right now. Both have released their desktop PC shipment figures for Q1 2013 and, depending on which sets of figures you believe, Apple’s market share has either grown by 7.4% (Gartner) or shrunk 7.5% (IDC). Just a little confusing then. 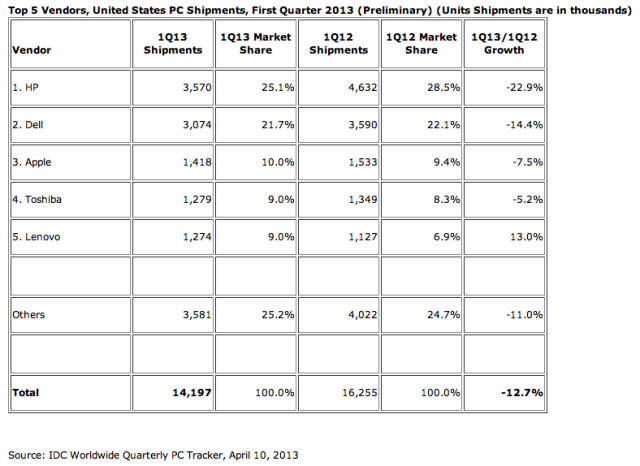 While PC sales as a whole have been steadily falling year on year, it’s a little confusing to get such a contrast in numbers, for one vendor, from both research firms. Not that this hasn’t happened before - in 2012, both firms had differences in their figures. But with the reason for that discrepancy being blamed on distributor shipments (IDC) versus end user shipments (Gartner), there was always going a slight variation in figures. But now both use the same end user numbers, so this shouldn’t be the case.

As we’ve already said, PC sales are down year on year, and while it’s being blamed on Windows 8 by IDC, Gartner aren’t as quick to blame the OS. It’s well documented that mobile computing in the form of tablets and smartphones is gaining ground on the PC, with most people getting either an Apple iPad, Google Nexus, Kindle Fire, iPhone or Samsung Galaxy S III for their on the go computing needs. And while Gartner did stick up in part for Windows 8, they did say that in four years, Microsoft could be irrelevant. Is someone spiking the coffee at Gartner and IDC?

We’re sure Apple will say everything is fine and their numbers are both up and more than healthy, but it’s interesting to see such a difference of opinion from Gartner and IDC. If Steve Jobs were here, he’d say it’s how you’re reading it; in this case, probably upside down, so just hold the numbers differently. For now, we’ll leave it up to you, the readers and fans, to micro-analyse the numbers.