Windows XP was a very well received OS. From its release in October 2001, it received three service packs and is still actively supported by Microsoft. Certain members of the IT community love it, and still use it, for its ease of use, speed of operation and supported hardware base. Windows Vista ended up being a mess for Microsoft, but they righted that wrong with Windows 7, which was nearly universally praised by the technical community and consumers as a whole. 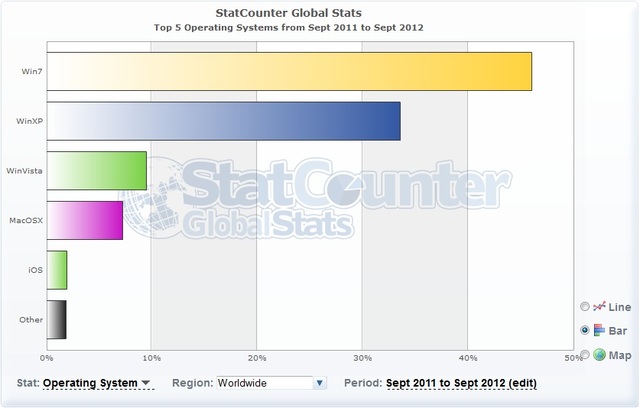 With Windows 8’s arrival today, Microsoft is still facing a battle to migrate the loyal Windows XP users away from the aging OS. Now, StatCounter has shown that from September 2011 to September 2012, XP still holds a global OS market share of just over 33%. StatCounter CEO, Aodhan Cullen, has given his take on the figures:

Our stats confirm the theory that business users in particular have been reluctant to move from XP. The new Windows 8 interface represents a radical overhaul for Microsoft, allowing it to enter the tablet market with the new Surface. The scale of change of the desktop experience, however, may heighten the initial reluctance of traditional business users to upgrade to this new OS.

It’s no secret that Windows 8 has split users. Some love it and others simply hate it. We recently reported that businesses may be planning to skip Windows 8, at least for now, and the above statement by Cullen only adds to the stories bleeding from Windows business users; they just aren't ready for the Windows 8 just yet.

That being said, Windows 7 has sold more than 630 million licenses and that number should continue to grow, likely eating away at the XP market share. With Windows XP still under extended support until April 8th 2014, Microsoft don’t have much longer to wait until they can drop support for the OS and push Windows 7 and/or 8 as more than suitable replacements.