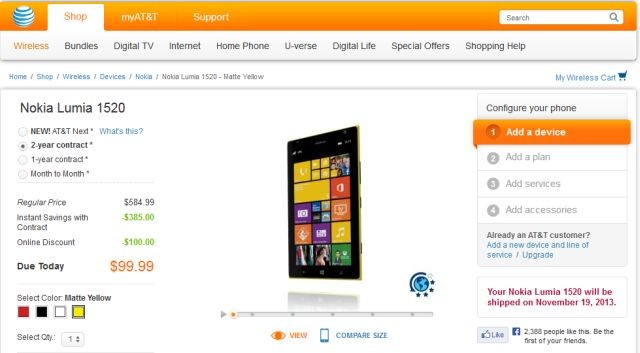 When AT&T officially announced last week it would start selling the 6-inch Nokia Lumia 1520 on November 22nd, it put a price of $199.99, with a two year contract, on the Windows Phone 8 smartphone. This weekend, it appears that AT&T is giving customers a break by resetting the price of the phone down to just $99.99.

AT&T's website shows that the new price is an online discount only. Customers also cannot order the 1520 online at that price and then pick it up at their AT&T store when it goes on sale next week. There's no word if this is a permanent online price reduction or just a temporary weekend sale so if you really want to get your hands on this phone, you might want to move quickly. We also have to wonder if those folks who already pre-ordered the phone last week at the higher $199.99 price will get some sort of refund.

Keep in mind that this new price tag still comes with some nice extras for the 1520, including a free $20 voucher that can be used to purchase apps and other content from the Windows Phone Store, a free copy of the game "Halo: Spartan Assault", and 50GB of cloud storage space via the AT&T Locker online service.