Zen Studios is at it again, this time working with Fox to turn some of their most popular animated shows into pinball tables. In the past, they've released titles based on Portal, Marvel, Walking Dead, and even their own intellectual property, and for the most part, they're always a great experience. However there have been some inconsistencies in quality when the company releases these four-packs, as explored in the Avengers Chronicles package, so I tried to temper my excitement with Balls of Glory, even though I'm a big fan of three of the four TV shows (I've never seen Bob's Burgers before). Let's see how each of the tables holds up.

This is the title I knew the least about, with my only experience being an episode of Archer that crossed over with Bob's Burgers, made even more humorous by the fact that the same actor voices both of the main characters.

The first thing I noticed on this table was how "cartoony" everything looked. While most of the Zen Studios tables look like they could be ripped out of the screen and set into your local bar, Bob's Burgers definitely looks more like a video game pinball machine and it took me awhile to get used to that, although the cell shading is an interesting artistic direction. Even the ball launcher is extremely unrealistic, consisting of a container of mustard that pushes the ball up the ramp. I understand the idea of the style, since these are cartoons, and I'd like to say that I got over it, but in my opinion it did somewhat detract from the table. 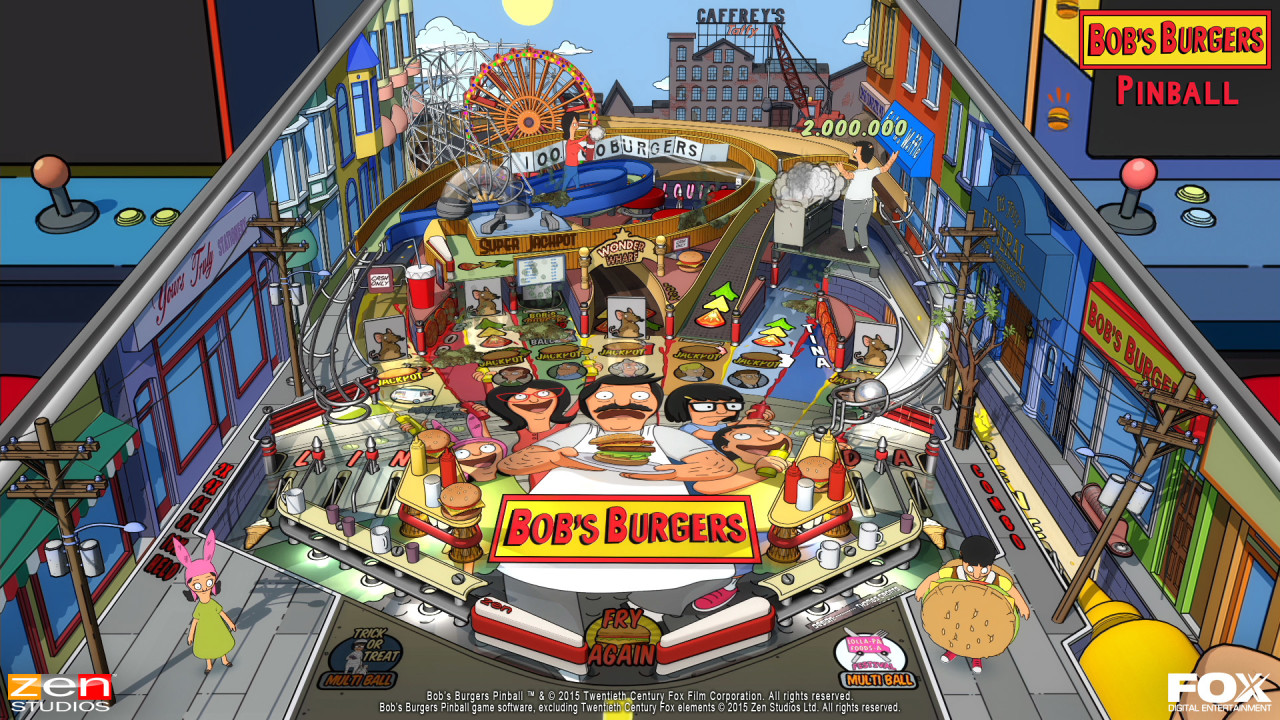 After getting past the stylized graphics, I found the table to be very simplistic but overall a lot of fun. There's really nothing tricky or difficult about Bob's Burgers. You unlock various challenges by simply hitting the ramps, and the missions almost entirely consist of continuing to hit the ramps (or rats standing in front of the ramps). The voiceovers add a lot of depth to the table and are never repetitive to the point of being annoying.

The one minor twist the table has is the ability to switch between day and night. This not only changes the table lighting, but also switches what missions are available. During the day, Bob's Burgers is open for business so missions revolve around handing out flyers to patrons and serving orders to customers, while at night you might have to clean out the deep fryer. You can change between day and night by holding down the launch button on the controller, but the only way to know this is by reading the instructions. 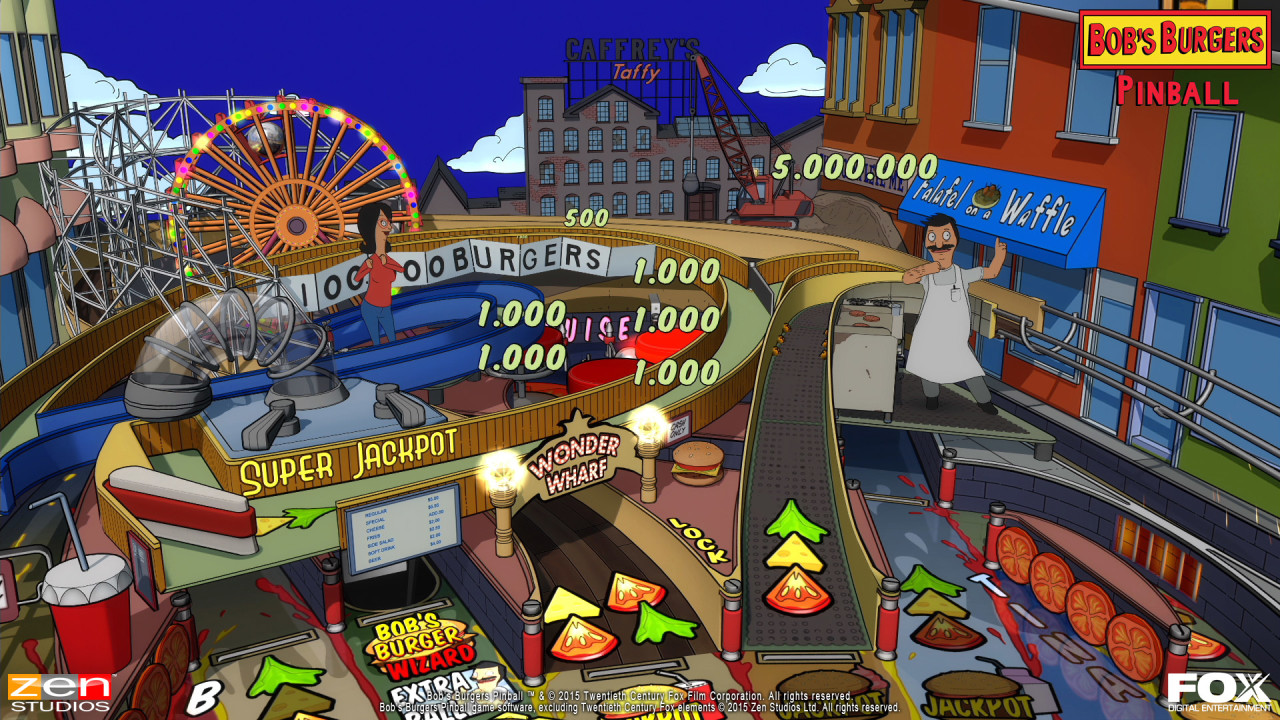 Overall, Bob's Burgers is a great table for people new to pinball because of the low difficulty, but it's also entertaining enough for pinball veterans to play as well.

The next table is based on everyone's favorite CIA agent, Stan Smith, and his family.

The overall artwork on the American Dad table is very similar to that of Bob's Burgers, and I'm still not a fan of it overall. The ball launcher consists of three water coolers that you fill up by pulling down on the stick and then release to fire the ball, but it just doesn't make sense and takes away from the experience. In addition, the skill shot for the table consists of pressing a button on the controller at a specific time after launching the ball to force Avery Bullock to punch it. 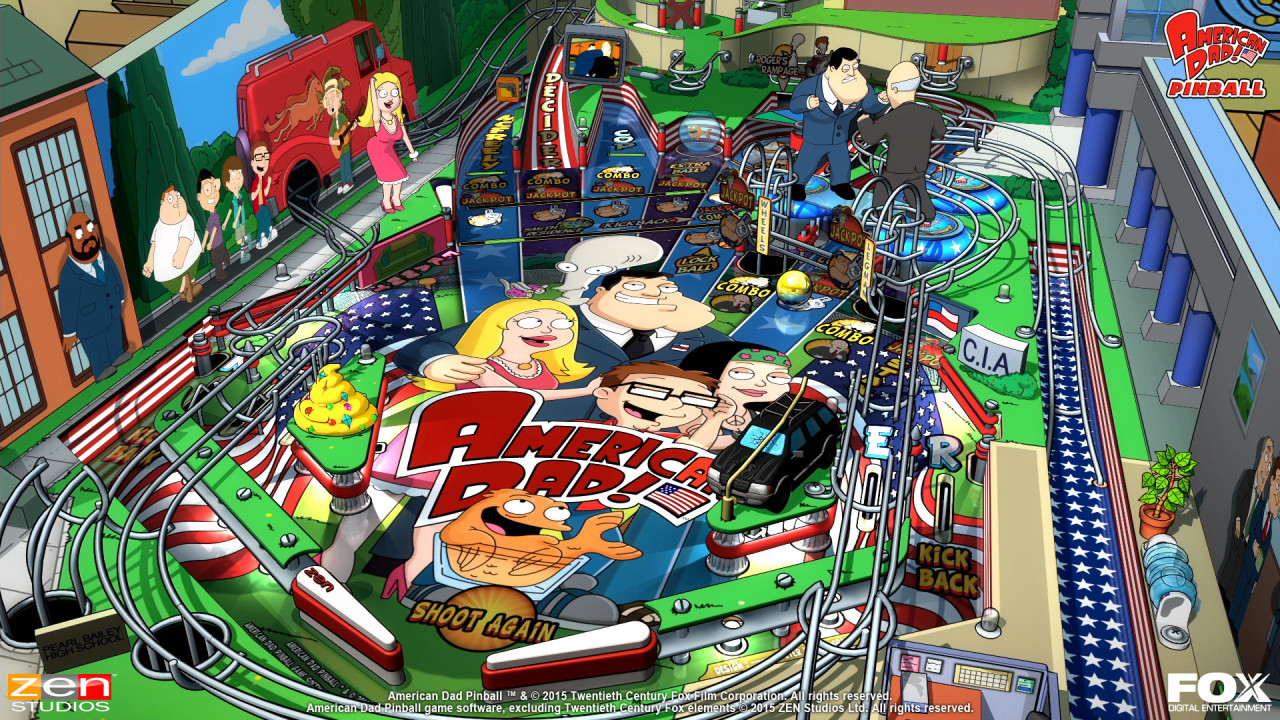 One source of confusion is the fact that the ball changes colors quite a bit, from silver to gold to green to red to blue, and there was no indication that I could find that explained what it meant and whether it changed the gameplay at all.

One of the interesting designs of the table is the ramp that swoops the ball below your flippers, much like the old Spider-Man table did. Since the ball runs down the rail on the right hand side quite a bit, this is a nice way to mix it up by alternating between the right and left flipper, but it did take me by surprise the first few times because it was so unexpected. 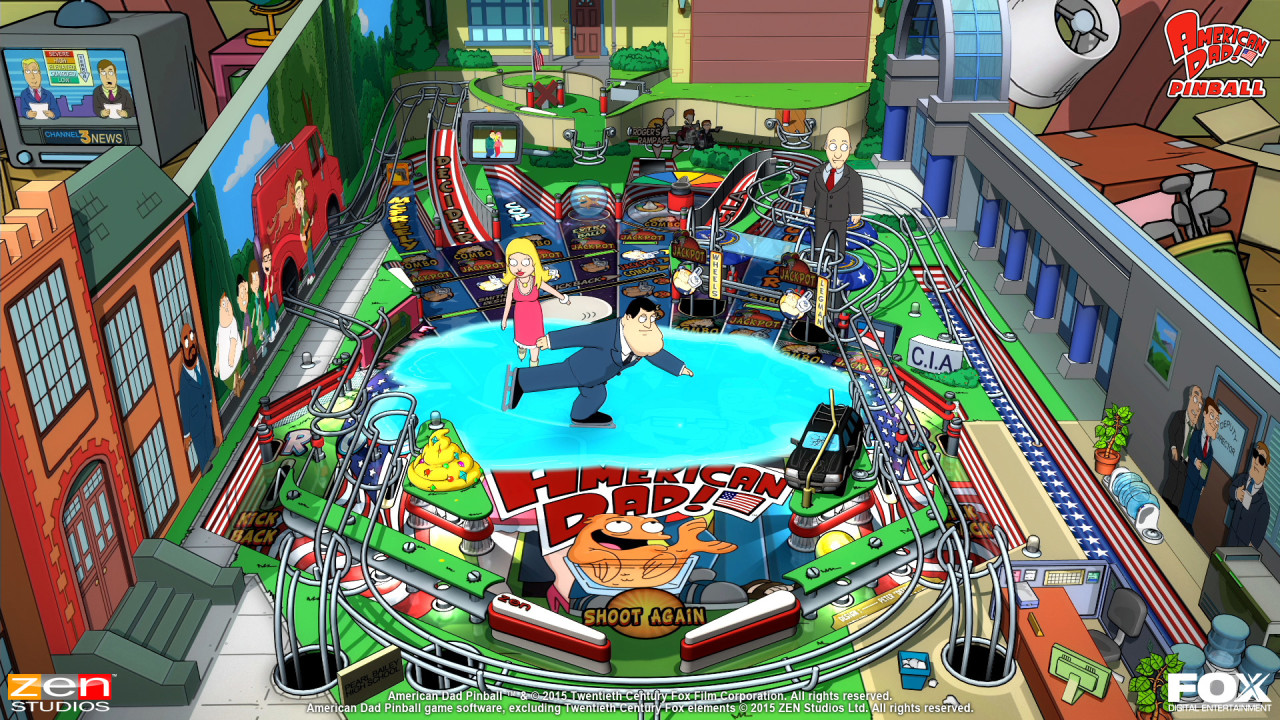 The playfield is almost entirely concentrated at the top of the table and although the table is large, there's just not much happening in the lower half of the playfield. This is painfully obvious the first time you start the ice skating mission, as the a large portion of the lower playfield coats with ice while Stan and Francine skate around. You're supposed to hit the lit ramps to complete the mission, all while avoiding hitting the skaters, which is an interesting mission, but I just wish there was more going on in the bottom.

Gameplay was, like Bob's Burgers, fairly simple, and I think the idea is to make most of these tables fun for the whole family. Overall this table seemed to be the weakest of the bunch, but was still a lot of fun and would still be worth a purchase even if sold individually.

I have to admit that, unlike most, I have only seen a handful of Family Guy episodes. I'm not opposed to the show, it just never caught my attention.

I sound like a broken record, but the graphics on the Family Guy table are similar to that of the previous two tables, although are a bit more realistic. In addition, the ball launcher and the skill shot is just as bad as American Dad: You pull back the plunger and release which pushes the guy in the wheelchair towards the ball with the goal of hitting Peter with the ball. And unlike every other table, this is one I preferred not hitting the shot on because when you succeed, you have to listen to Peter writhe in pain for literally 10 seconds. You can hear it for yourself if you watch the embedded trailer above. 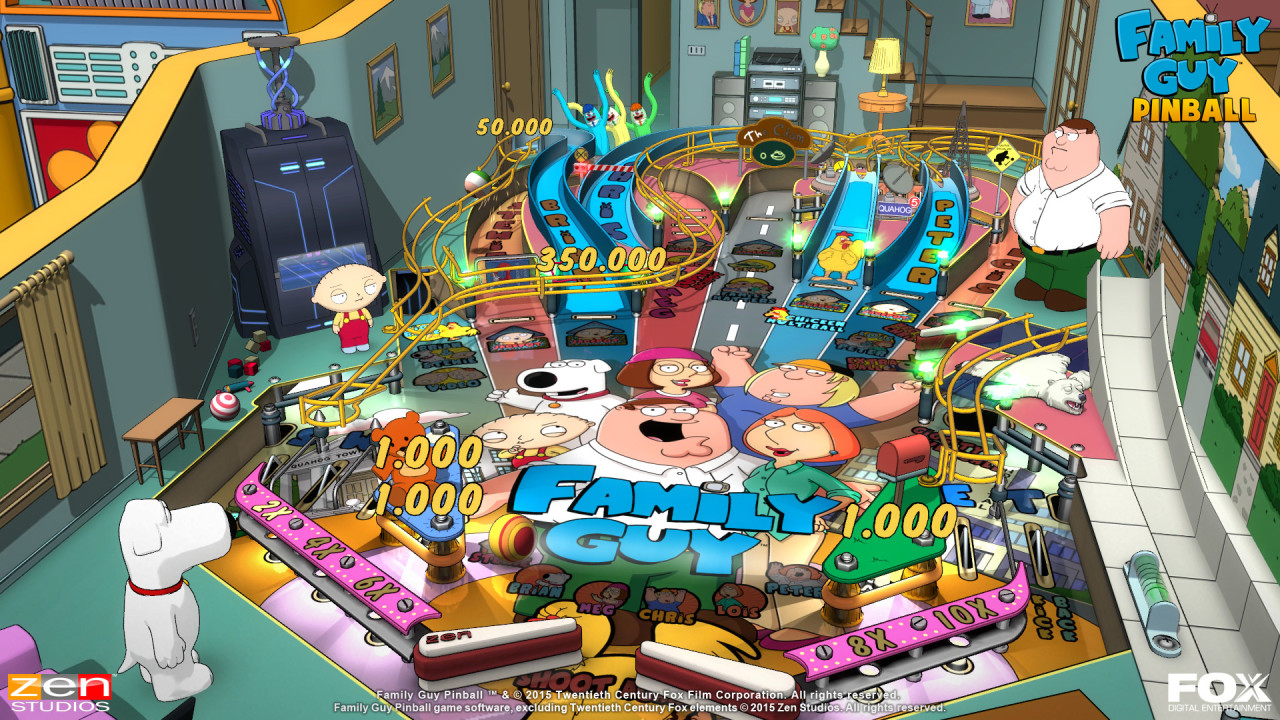 Like the previous two tables, Family Guy is also a very accessible table to those without much pinball skill. You have to hit the ramps to spell out the name of each family member, and doing so starts that person's mission. However unlike more advanced tables, you don't have to actually complete the mission to advance: Simply activating it is all you have to do, while playing and finishing it is used to give you more points.

Then there's several side missions, the best of which is the chicken ramp in the upper right hand corner. Although I don't know the reference from the show, I laughed everytime I started the mode and heard Peter say, "I don't take coupons from giant chickens, not after last time." I still don't know why it's funny, but the actor's delivery of the line just cracks me up. Each family member's mission is entertaining and the voiceovers do a great job of adding to the atmosphere.

This show is one of my favorite comedies on television. If you haven't seen it yet, you owe it to yourself to watch a few episodes, although I will warn you that it's definitely not for kids.

Remember how I didn't like the launcher very much in any of the previous three tables? Well, Archer takes the cake for being the worst in my mind. Launching the ball consists of having... an alligator... bite the ball and throw it up the ramp. It didn't make any sense and detracted from an otherwise awesome table. 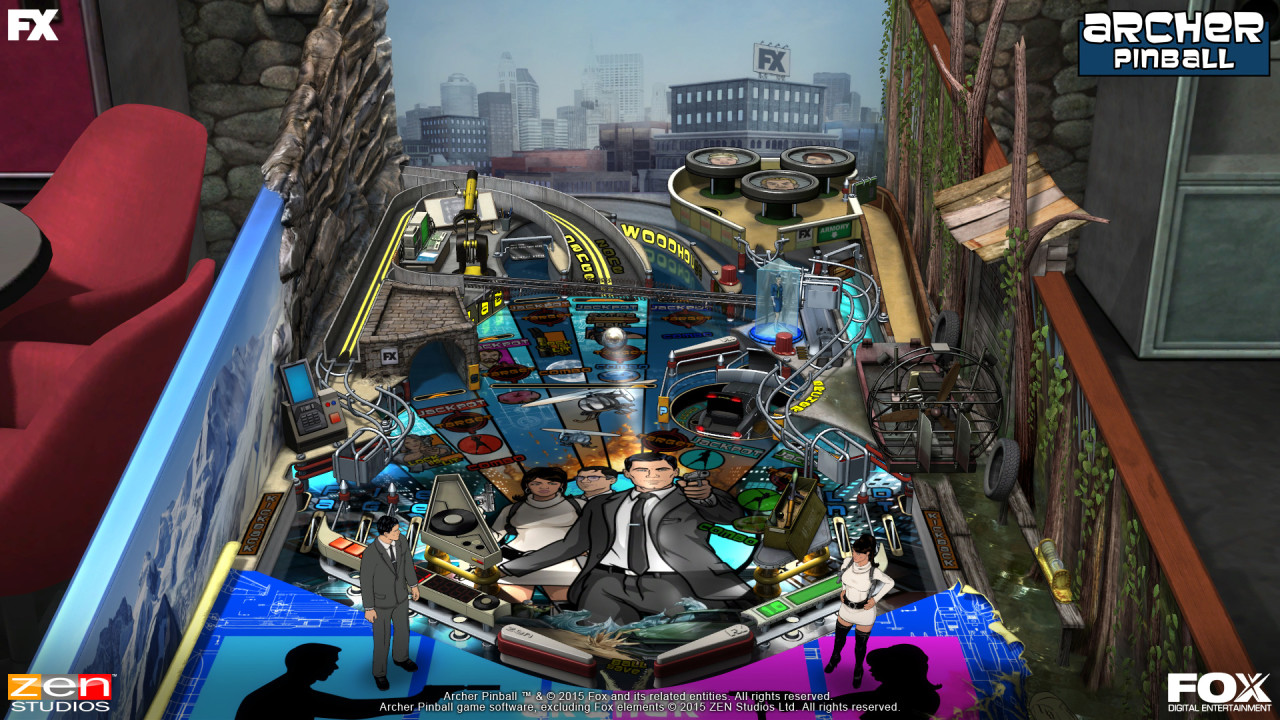 On the other hand, the graphics on this table felt the most realistic of any of the tables in the Balls of Glory pack. It seemed like, aside from Archer's car driving across the table from time to time and the aforementioned alligator, that the table was real.

This table is also the most challenging of the pack, but not so difficult that you get frustrated. Completing the game consists of spelling out the word awesomeness by completing 11 different missions. You don't have to complete specific missions though, so you get to choose what you play. There are multiple places to start missions, and each activation results in playing one of three missions. That means if you find an easy mission you love, you can't keep playing it over and over to advance which helps balance things out and is a great addition I haven't seen before. 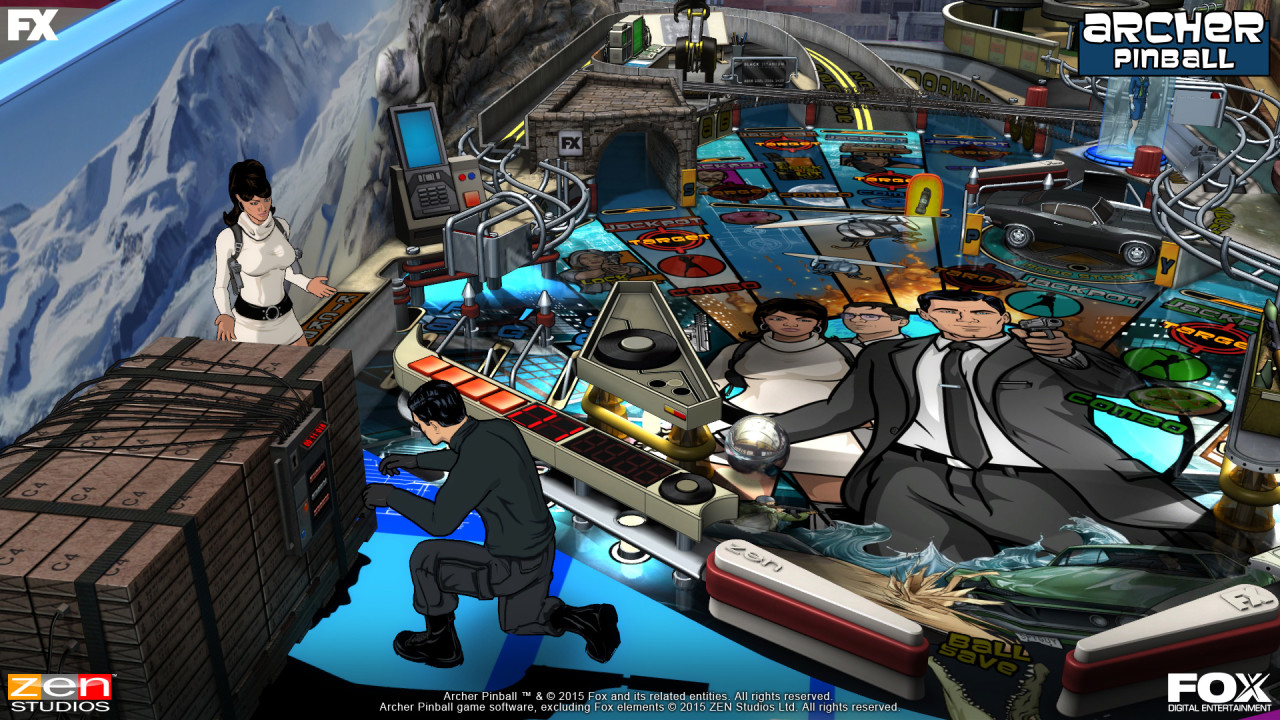 The Archer table also has a store where you can buy power-ups for your game such as an extra ball or lighting up the outlanes if you collect enough money during your gameplay. While not a unique feature, it's definitely rare. 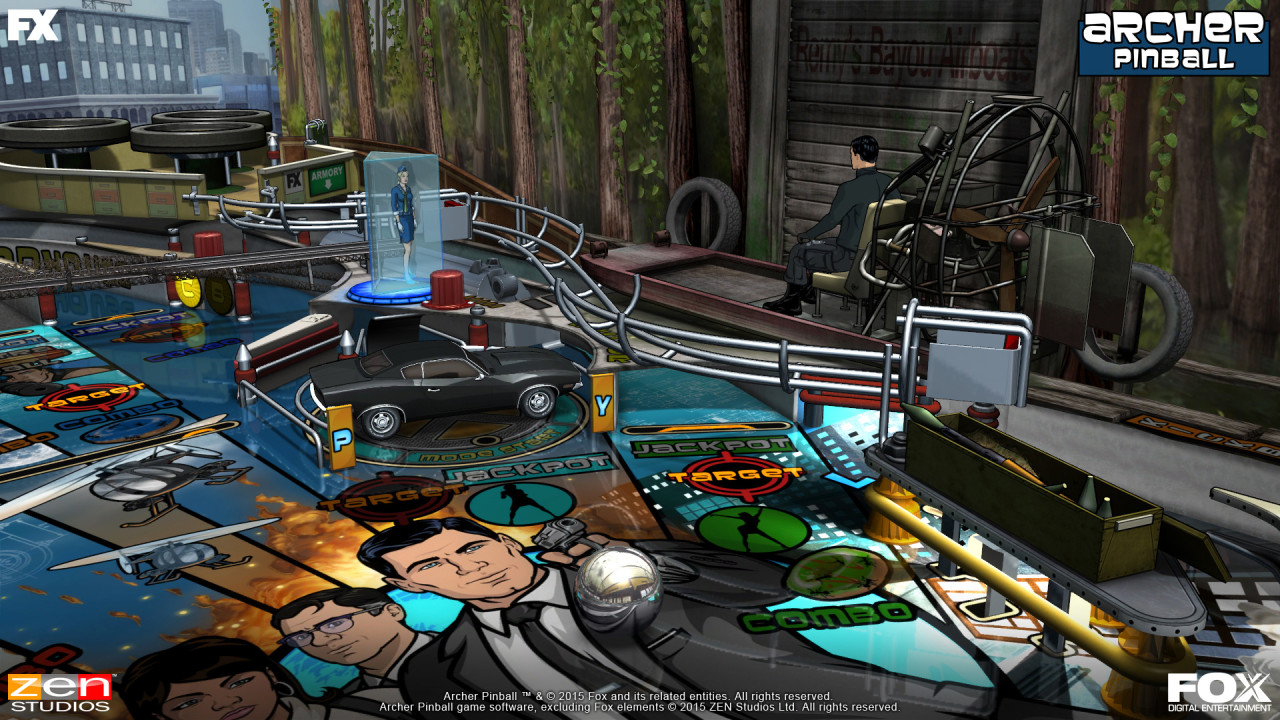 The playfield is also interesting. Archer's car dominates the right hand side of the playfield, and a useful flipper is placed above that to give more varied playability. Some of the missions add unique twists and of course, the best mission is completing Archer's life-long dream of fighting on top of a moving train. It's recommended that you at least glance through the online manual though to understand both how to activate each mission as well as what to aim for (and what to avoid!) during the missions.

First of all, what's with the name of this pinball pack? I'm not sure what Balls of Glory has to do with these Fox titles, but it's a little confusing. That said, it doesn't detract from the excellent tables Zen Studios has released.

One of the biggest concerns with any pinball table is the repetitive nature of the audio clips. This has been a problem in some of the previous tables, such as South Park, but in Balls of Glory they did a great job of not becoming annoying. In many cases, especially with the Archer table, I wanted to hear even more of the clips.

The best part of this pack is that while every table isn't perfect, each of them is still a lot of fun to play, regardless of your skill level. Three of the tables are very accessible to those who aren't used to having to complete missions or make complex shots, while Archer is definitely more advanced. However even Archer would be fun for those who just want to flip their ball around the table (phrasing!) and have fun. Zen Studios did a great job of making tables that are awesome for all skill levels, and that's not an easy feat to accomplish.

All in all, this pack is as close to perfect as you can get. While I can get past the cell shading in the tables since that's just an artistic style, I really didn't like the ball launcher on any of the tables, and if that's my biggest complaint, I think Zen Studios has a winner on its hand.

The tables will be released on Tuesday and will cost $9.99 for all platforms. In addition, Zen Studios is working with Microsoft to allow portability between the Xbox One and Windows 10, so at some point in the near future we expect you'll be able to buy the games once and play them anywhere!