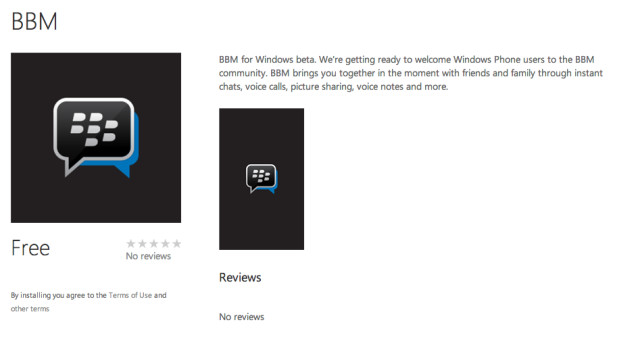 Many years ago, BlackBerry Messenger (also called BBM) was the king of the messaging platforms as it bypassed carrier SMS rates. For many years, it was rumored to be leaving the confines of the BlackBerry world and would eventually become cross platform. Now, as BlackBerry fights to remain relevant in today's competitive markets, they are finally starting to get the messaging platform out on other devices.

So, what about Windows Phone? A new BBM app is now in the store, but it is currently in private beta. A user on reddit, who doesn't claim to be part of BlackBerry, says that it will exit private beta very soon but provides no evidence to support that claim.

If you find yourself running out of messaging options on Windows Phone -- like Skype, Snapchat, SMS, WhatsApp, or Facebook -- you will soon be able to use BBM.

While we are always happy to see new apps entering the Windows Phone Store, we really can't see BBM being the killer app that so many have been waiting to arrive. If this was a few years ago, before BlackBerry started tanking, then it might be a different story.

You can check out BBM at the Windows Phone store link below.