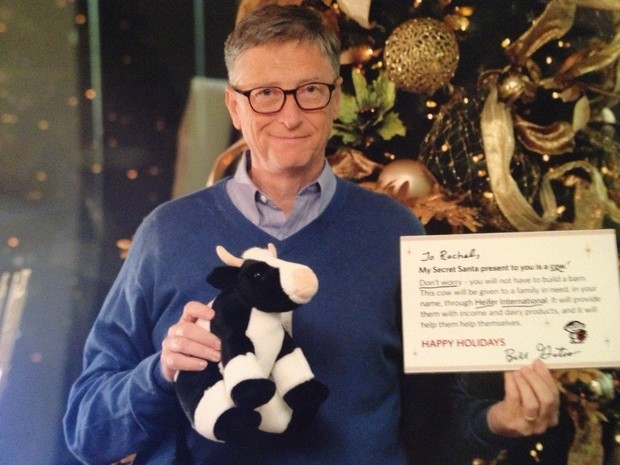 The annual "Secret Santa" holiday tradition in many workplaces is supposed to allow employees to pick a name out of a hat and then give that person a small gift without telling them beforehand. This week, a Reddit user was the lucky person who got Microsoft Chairman Bill Gates to be her virtual "Secret Santa" this year.

Gates participated in a Reddit AMA chat session earlier this year and apparently enjoyed the experience so much he decided to participate in the website's annual holiday gift exchange. Reddit user "Rachel" posted that she didn't realize that Gates was her "Secret Santa" until she saw a picture of him holding up the gift card in the package she received.

Gates bought a real cow in Rachel's name that will be sent to a family in need as part of the non-profit organization Heifer International. However, she also received a small cow toy directly from Gates, along with the National Geographic travel book "Journeys of a Lifetime." Rachel was clearly very happy and appreciative of Gates' generosity on her behalf although she did write, "ps: Sorry for the apple ipad on my wishlist, that was really awkward."