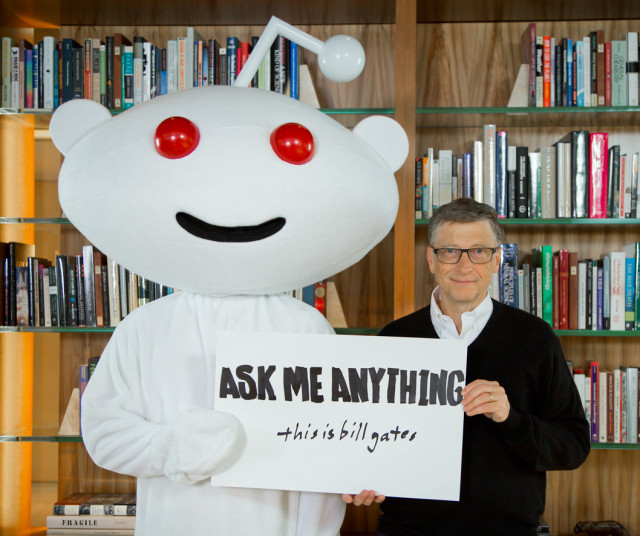 Bill Gates has taken to Reddit once again to partake in the site's AMA (Ask me Anything) and one user, ok it was my question, asked Bill what his new role at Microsoft would include.

Microsoft's founder took on a new role at Microsoft as an advisor to Satya Nadella, the company's new CEO, and stepped down from his role as chairman of the board after Steve Ballmer retired.

Bill responded to this question (and a few others) by saying that:

I make sure we pick ambitious scenarios and that we have a strong architecture to deliver on them. I encourage good work (hopefully).

I am excited about how the cloud and new devices can help us communicate and collaborate in new ways. The OS won't just be on one device and the information won't just be files - it will be your history including being able to review memories of things like kids growing up. I was thrilled Satya asked me to pitch in to make sure Microsoft is ambitious with its innovation. Even in Office there is a lot more than can be done.

My time will be about 2/3 Foundation and 1/3 Microsoft. I will focus on product work mostly.

We're all curious to see how much of an impact Bill has at Microsoft. In his new role and with a new board in place, Microsoft is different beast than it was a year ago. A new CEO and a new chairman of the board can go a long way to changing the internal mantra at a company and with Gates in a new, and more interactive role, Microsoft is once again on the move.

With more time at Microsoft, or at least, it appears more time as we don’t have an accurate calculation of how much time Bill was on-site in his previous role, those who screamed for Bill to re-take his role as CEO may finally hush up. More so, with the co-founder more involved at the ground level, it could provide new avenues for motivation within the company.