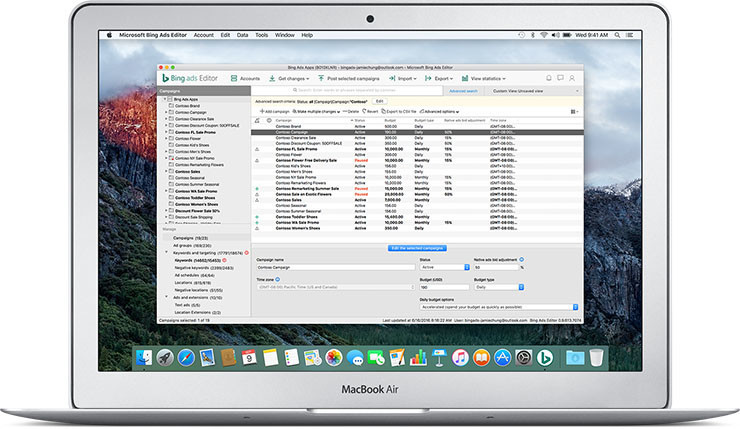 The company notes that while it has offerings for its Web UI, Bing Ads V10 API, Bing Ads Editor for Windows, iOS, and Android, it has so far failed to create a robust desktop offering for Mac. The beta for Apple's desktop platform was announced back in November, so it's taken seven months to launch it.

Here's some of what Microsoft is offering in Bing Ads Editor for Mac beta:

Using Bing Ads Editor for Mac you now have the convenience of managing multiple accounts at the same time without having to wait for tasks to finish completing. You can simultaneously sync your campaigns, start a Google Import and perform local bulk edits faster and easier.

Being able to copy optimized campaigns and ads from one account to multiple is even easier with copy and paste. Editor for Mac natively supports OS X keyword shortcuts such as Command ⌘+ C and Command ⌘ + V with many more on the way.

You can sign up for the beta right here. It's currently only available in US English, but it will be offered to all users by the end of the summer. You'll be asked to fill out a short survey, after which you'll be added to a queue to be invited to the beta program.