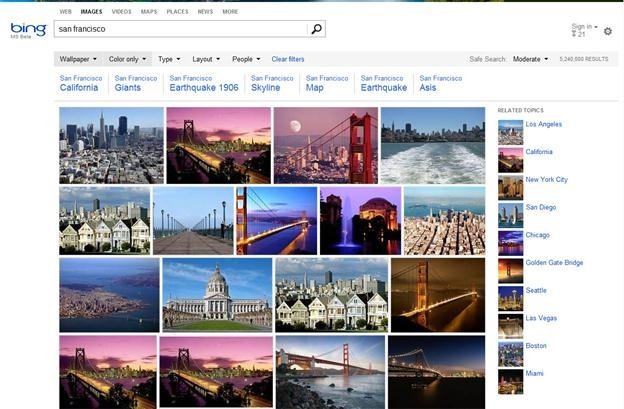 Not long ago, Microsoft launched a new version of its Bing website, including an all new layout and Facebook integration. Today, Bing launched a new look for users to search for images on the Internet. In a post on the official Bing blog, Microsoft goes over the new image search features.

The most obvious change is that when you search for images, you get much larger photos rather than smaller thumbnails. Microsoft says, "We trimmed out all our empty whitespace and filled it with pictures to make image search more visual."

When you hover on an image, you’ll immediately get a blown up preview that follows your mouse around. You can hold up this “magnifying glass” to any picture and see its size, title, and where it comes from. It’s smooth, fluid, and a little bit addictive.

Bing users can also filter their image searches according to size, color, type, layout, and faces. You will also get some search suggestions if the word used to find the image might mean more than one thing. It also offers some related image search suggestions along with another that shows which images are trending on the Internet.