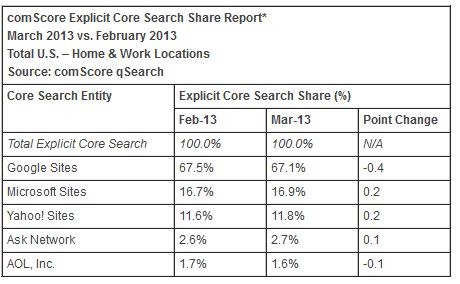 We decided to go back and compare ComScore's March 2013 numbers to what the research firm said the numbers were in March 2012. Back then, Bing had a market share of 15.3 percent, which means that in one year's time Bing's share has gone up by 1.6 percent. Google's share also grew, but not as much. The March 2012 numbers showed it has a share of 66.4 percent, which means it gained just 0.7 percent in the last 12 months.

The bad news goes to Yahoo, which had a U.S. market share of 13.7 percent in March 2012. This week's new numbers showed that Yahoo's share went down by 1.9 percent in the past year.