BlackBerry has been a part of the smartphone conversation for quite some time. It once had a dominating grip on the industry, but things have changed quite a bit over the past decade, with discussions focusing less on its mobile devices and more about its business, and the loss of billions of dollars. In December of 2016, the firm sold the rights to its name to TCL, ushering in a new era for the company. So far, TCL has done some good, delivering the KEYone during last year's Mobile World Congress. The firm claims to have had great success with it and has also gone on to more recently release the BlackBerry Motion. With its debut in the United States in January, can BlackBerry make lightning strike once again with its latest handset? 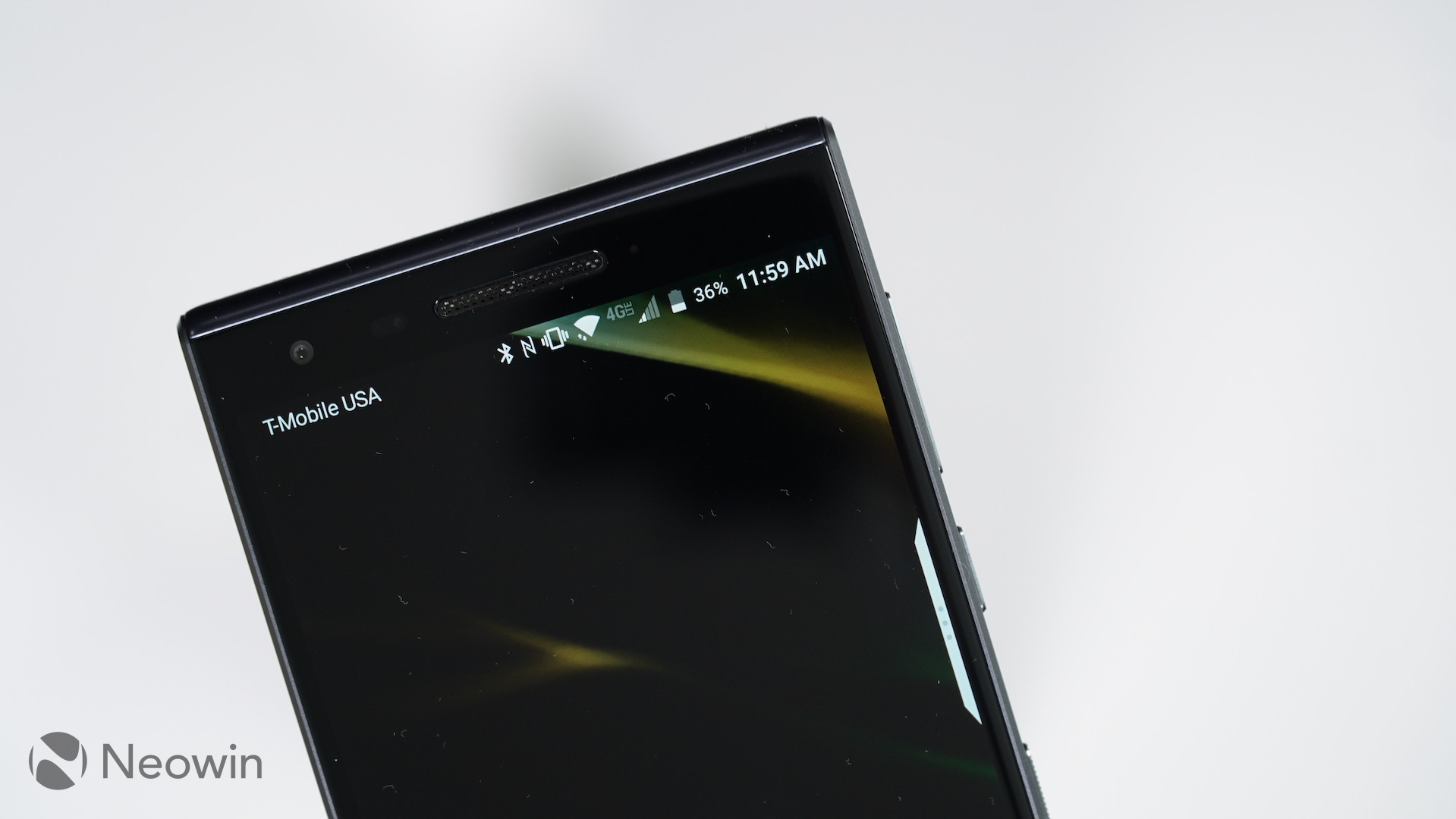 In a time when having the thinnest bezels is considered one of a smartphone's most prominent selling points, BlackBerry has taken the opposite approach, sticking with a design that could have been considered cutting edge in 2014. But the Motion isn't meant to look like the rest and is purpose-built, residing in a category of smartphones that could be considered as an all-rounder. The front is dominated by a 5.5-inch 1080p IPS LCD that looks good in most scenarios, with accurate colors and sharpness, but doesn't seem to get as bright as one would want it. This isn't a problem in most environments but is noticeable when outdoors, making it difficult to enjoy images and videos when under bright sunlight. On the opposite end, the screen also seems to not get as dim when in lowlight conditions, meaning you'll be looking at a screen that is always a bit too bright when at the theater or other similar conditions. 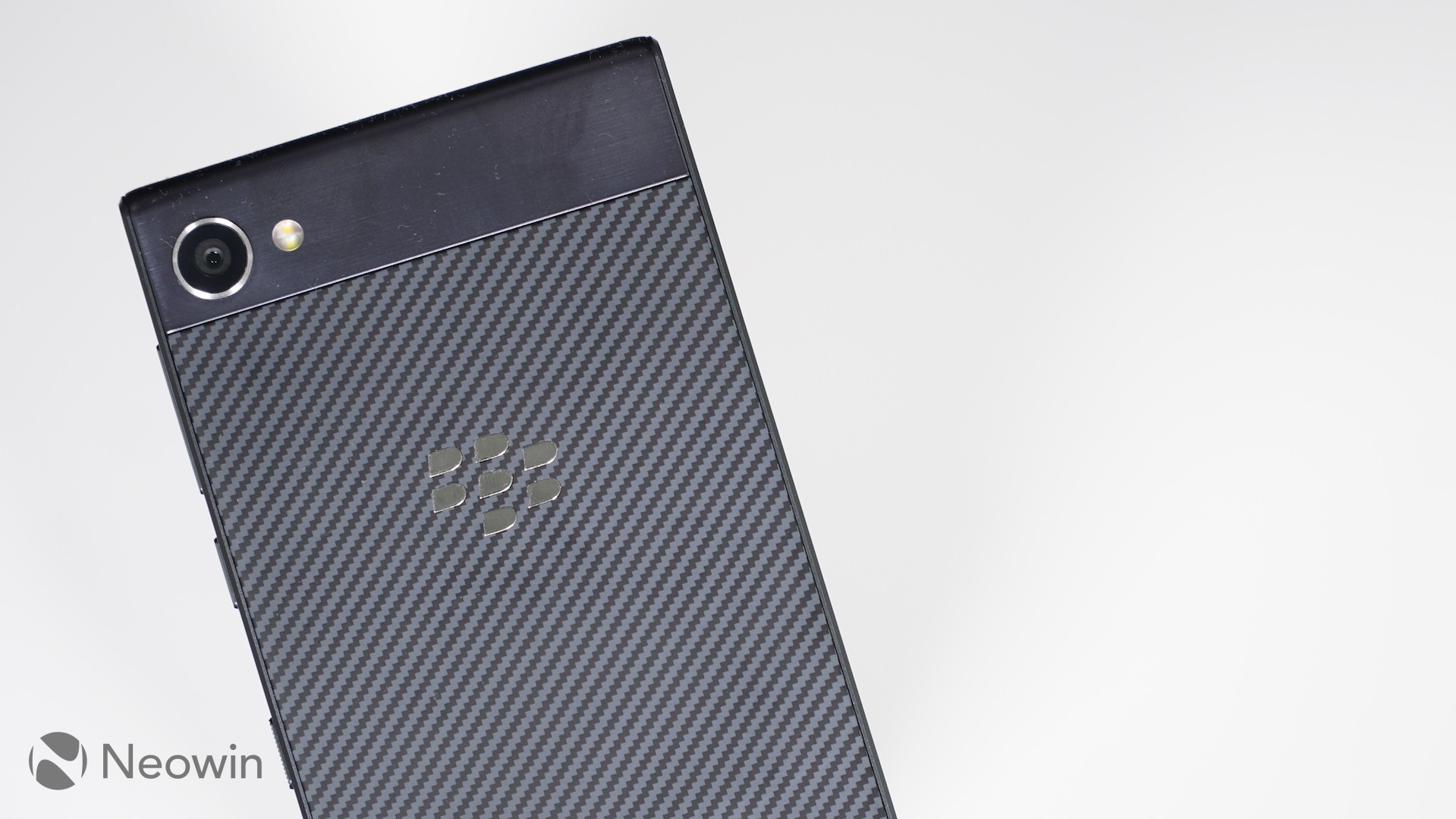 Under the display is a large chin that houses a physical home button, along with capacitive back and overview button that illuminate in a soft white glow. The home button can be depressed and also held to yield different kinds of actions like calling upon Google's Assistant. When first removed from the package, the button was quite stiff, becoming stuck numerous times inside its crevice, making me wonder if it was defective. Luckily, after the first few uses, the button seemed to loosen up, and the problem has not manifested itself since. The home button also doubles as the phone's fingerprint reader and is quick and accurate. It isn't the fastest by any means but there is nothing to complain about here. 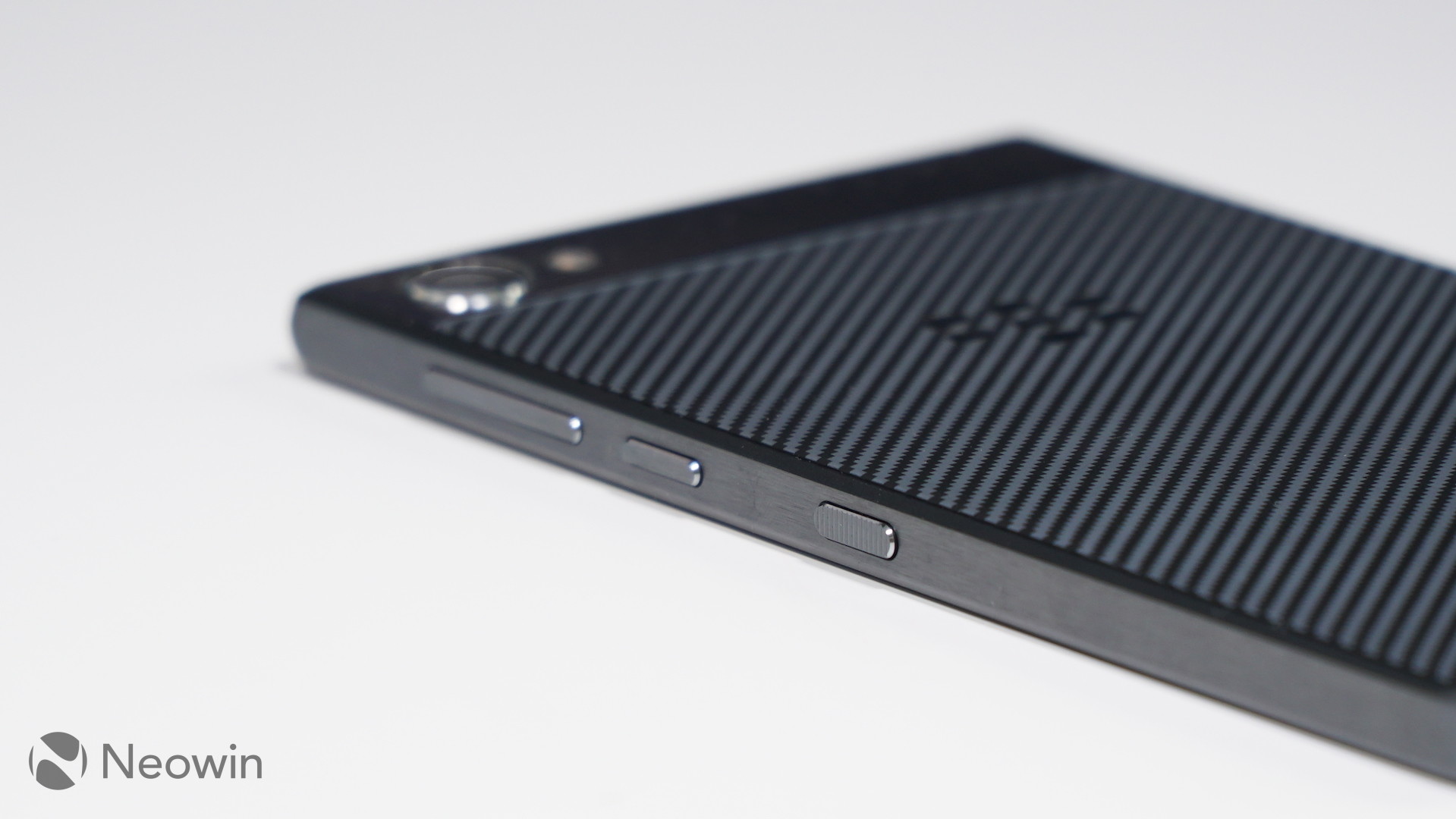 The rear is a mix of a rubberized plastic with a weave pattern that looks to mimic carbon fiber, and a brushed metal finish that occupies the top portion surrounding the camera. When you grip the rear, it doesn't feel sticky like a cheap TPU case, but still offers a good amount of cling, which is quite welcome. This ensures that you'll have an easier time keeping it in your hand, without it becoming a nuisance each time you want to remove it from the pocket or shove it in a bag. The chassis is made from metal and provides a sturdy spine for the unit, with the right housing the volume rocker, power button, and convenience key. The convenience key is a wonderful part of the experience as it can be assigned to open any app of your choosing or can also be set up to engage a user configured profile, speed dial a particular contact, send a message, and more. It seems like something so small, but in day-to-day use, it is a godsend. 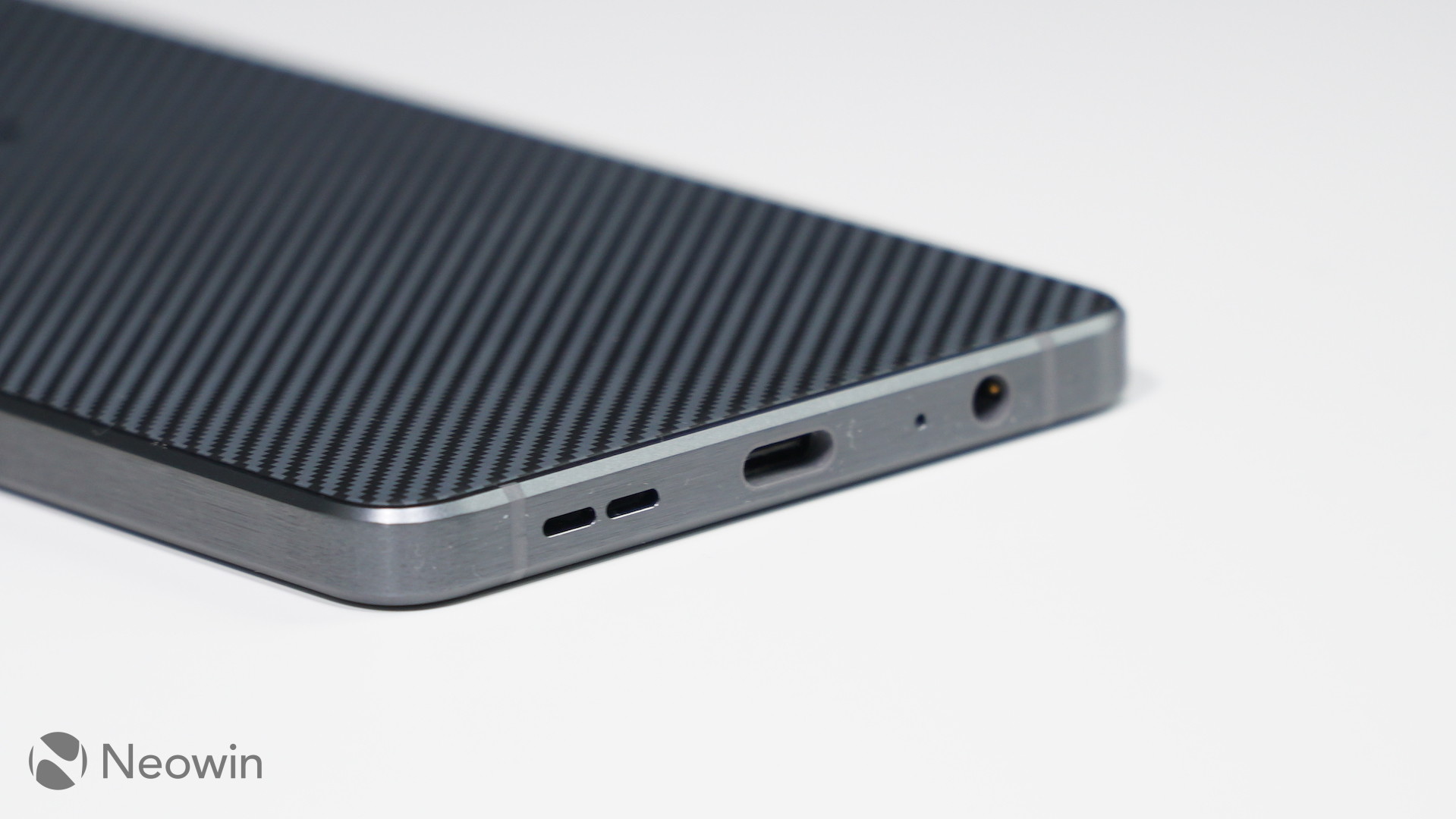 The handset also offers the best of the past and the future, making use of a USB Type-C port for charging and data transfer, while also including a 3.5mm headphone jack so you can use your existing audio peripherals. Looks will always be subjective but personally, the Motion looks good and has a style that differentiates itself from the sea of phones coming out in the low to mid-range that look nearly identical. It isn't the sleekest but it feels like a sturdy piece of hardware and has character, while also providing the user with the creature comforts one would expect from a smartphone. 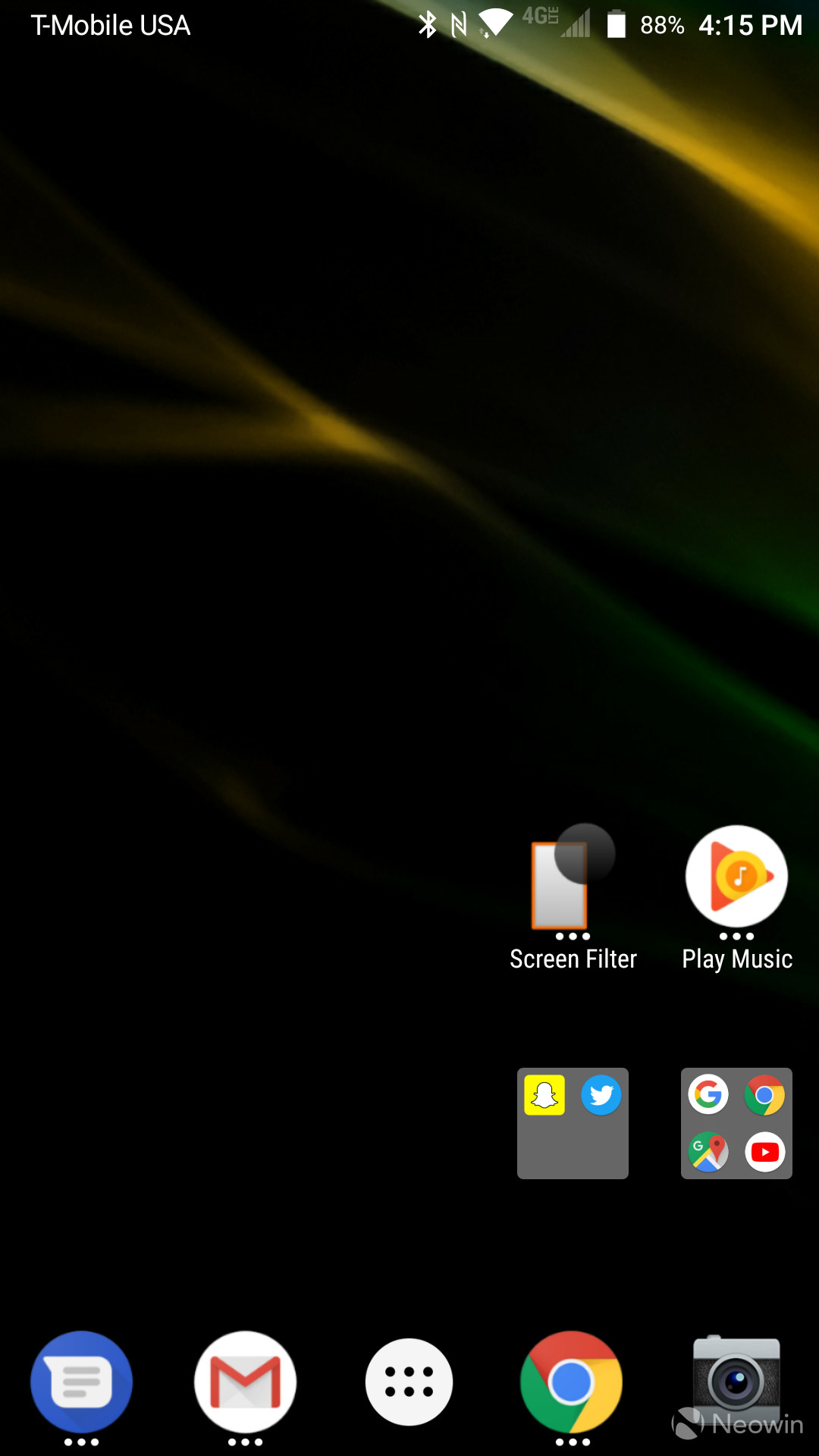 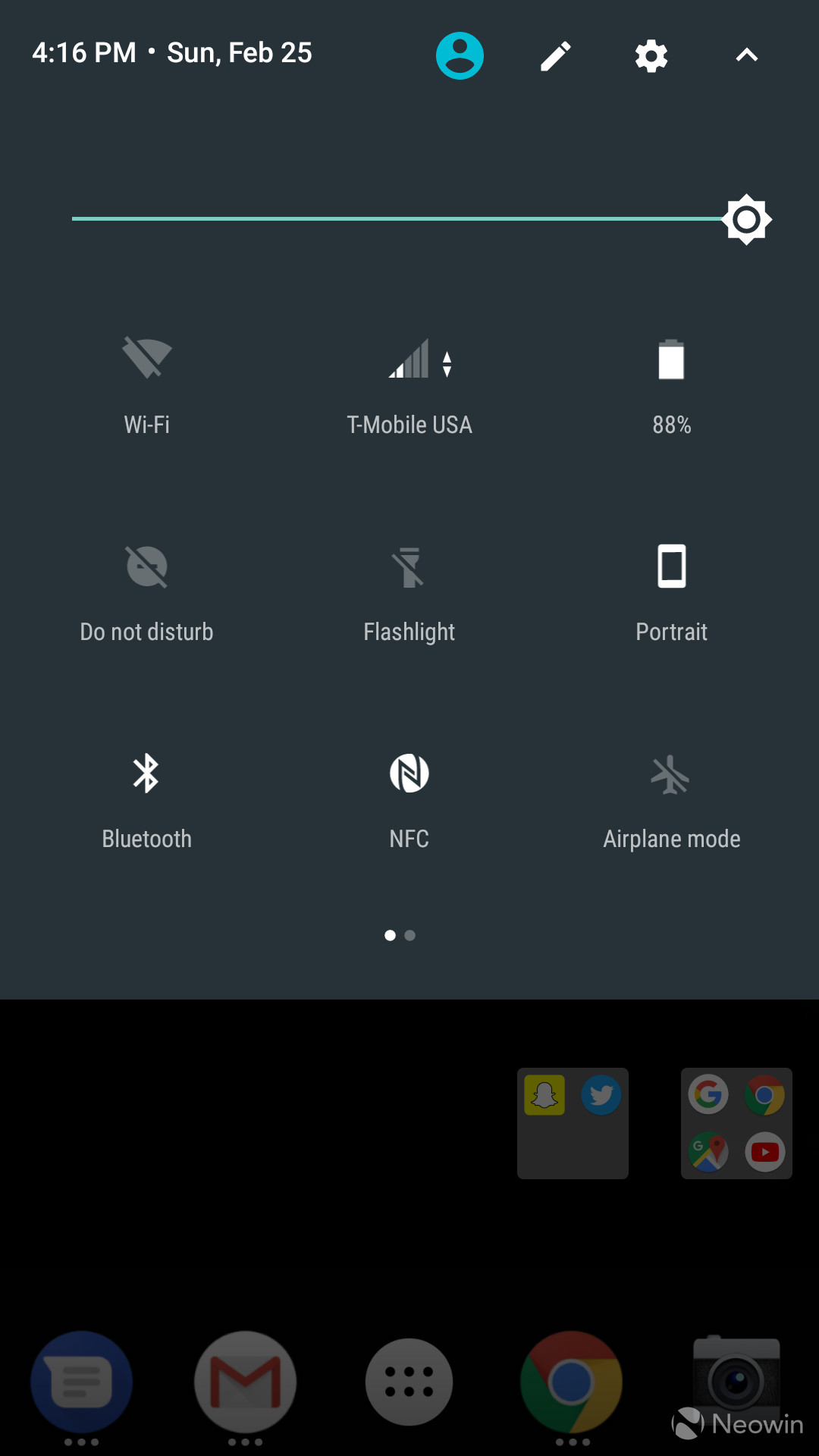 BlackBerry made its name by providing its customers with industry-leading security. In its heyday, it was able to accomplish this by crafting its own operating system, backed by its own integrated networking and communications technology. While a majority have long since moved on from BlackBerry Enterprise Server (BES), BlackBerry Messenger (BBM), and other services, the company has built a trusted and new experience using Google's Android OS. 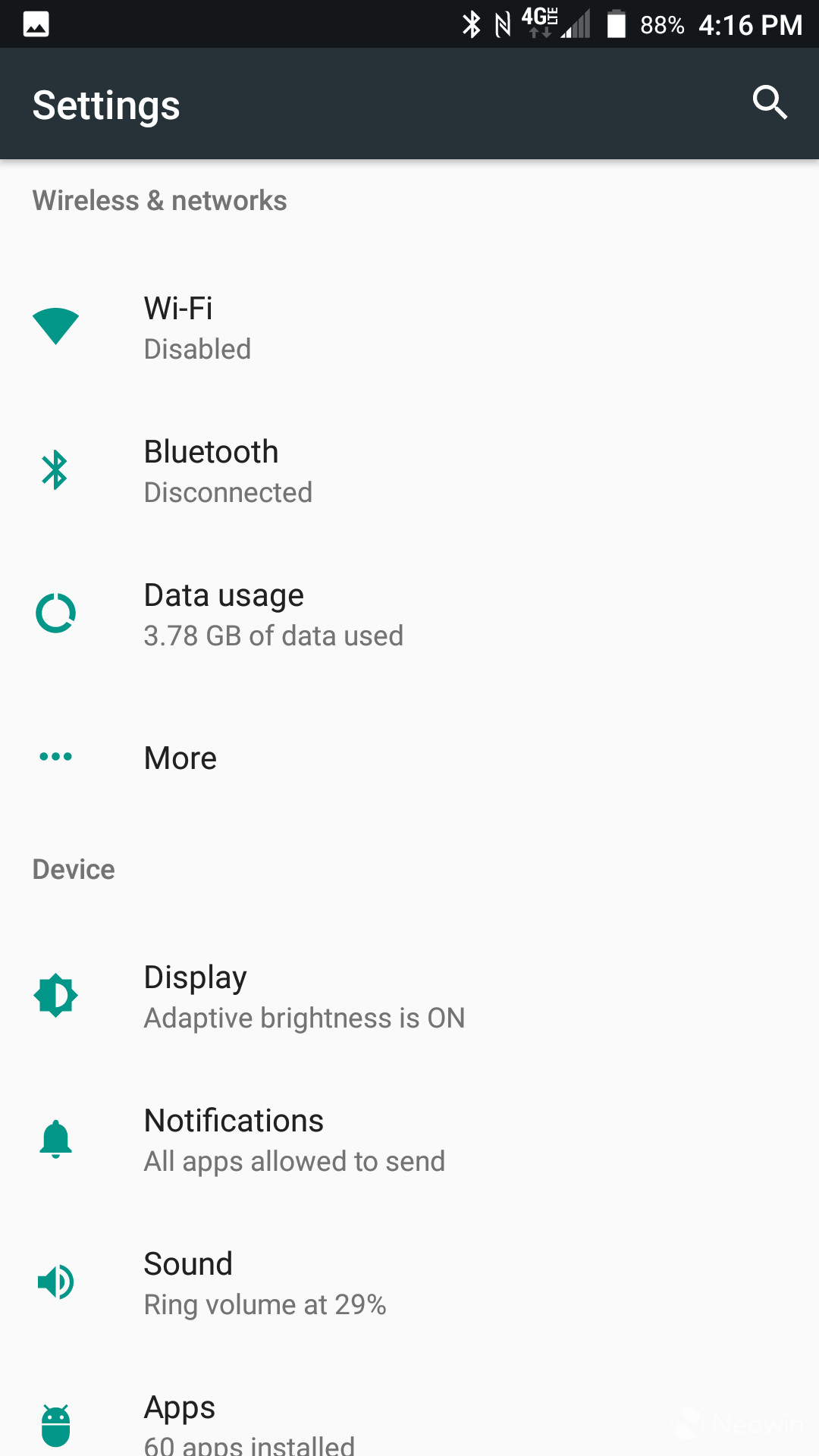 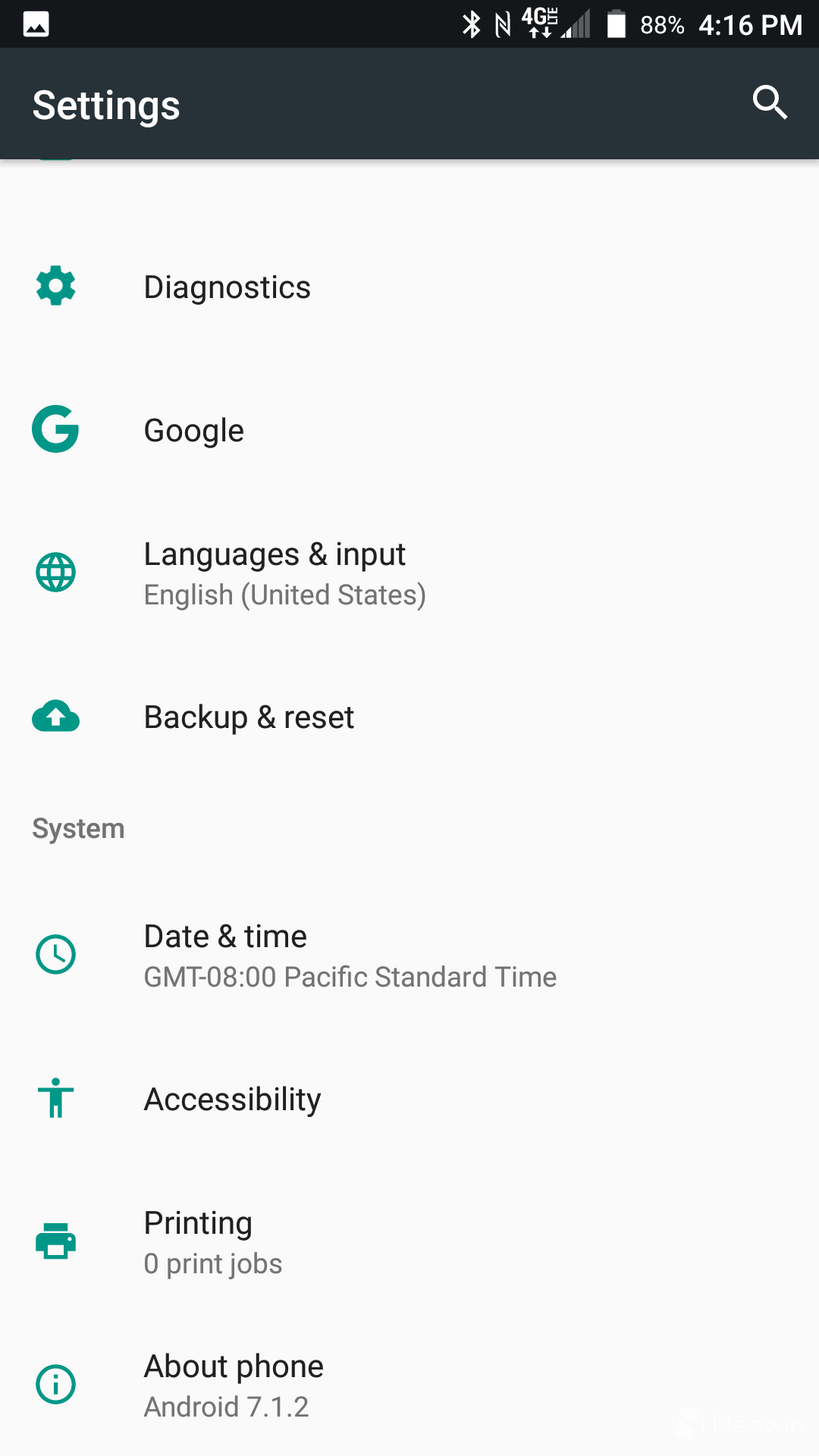 The Motion arrives with Android 7.1.2 at the time of writing this article and has the Android security update from January. From an interface standpoint, it feels like a stock experience with BlackBerry sprinkling in little things here and there to provide enhanced options when it comes to security and convenience. The Productivity Tab, Privacy Shade, Password Keeper, and BlackBerry Keyboard are just some of the additions, with each giving the user new tools that aren't available in the standard Android interface. 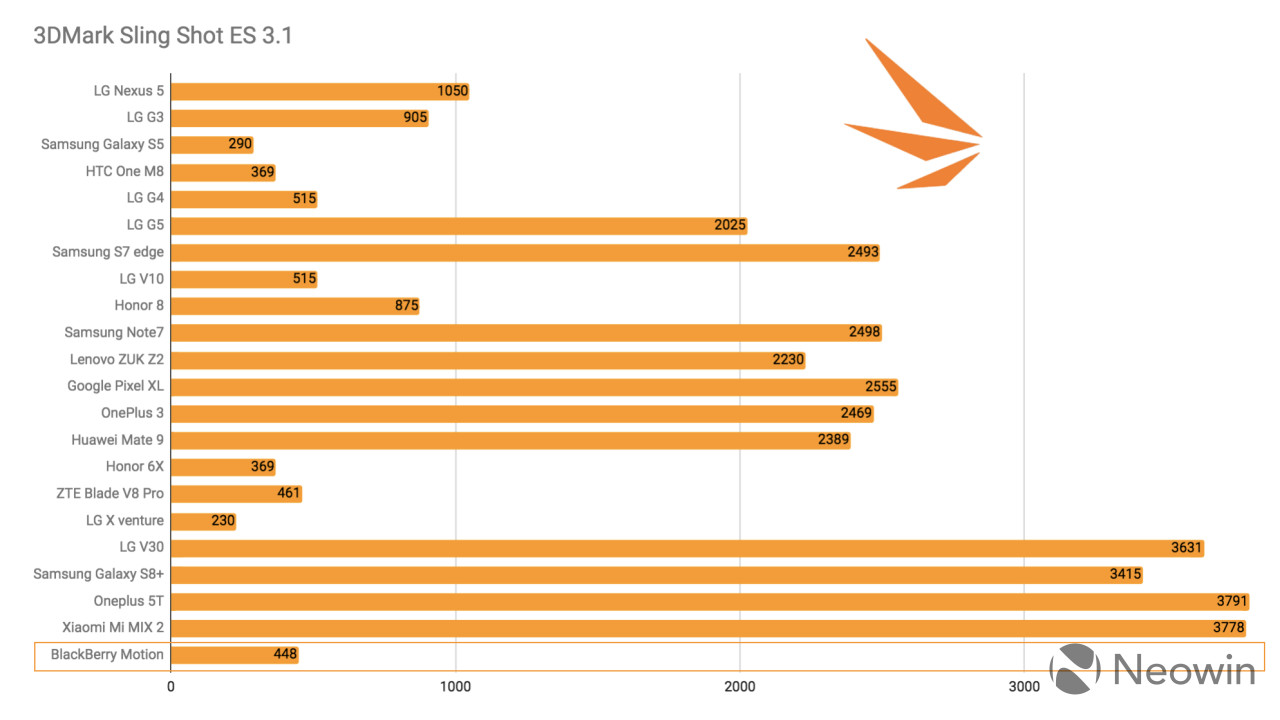 When it comes to performance, the Motion utilizes a Qualcomm Snapdragon 625 processor and 4GB RAM. The processor made its debut a couple years ago and while it is a great option when it comes to balancing power and efficiency, it doesn't always provide the smoothest experience. There aren't major problems in day-to-day use but there are times when the phone seems to hang for a just a second after something is pressed or a command is inputted. 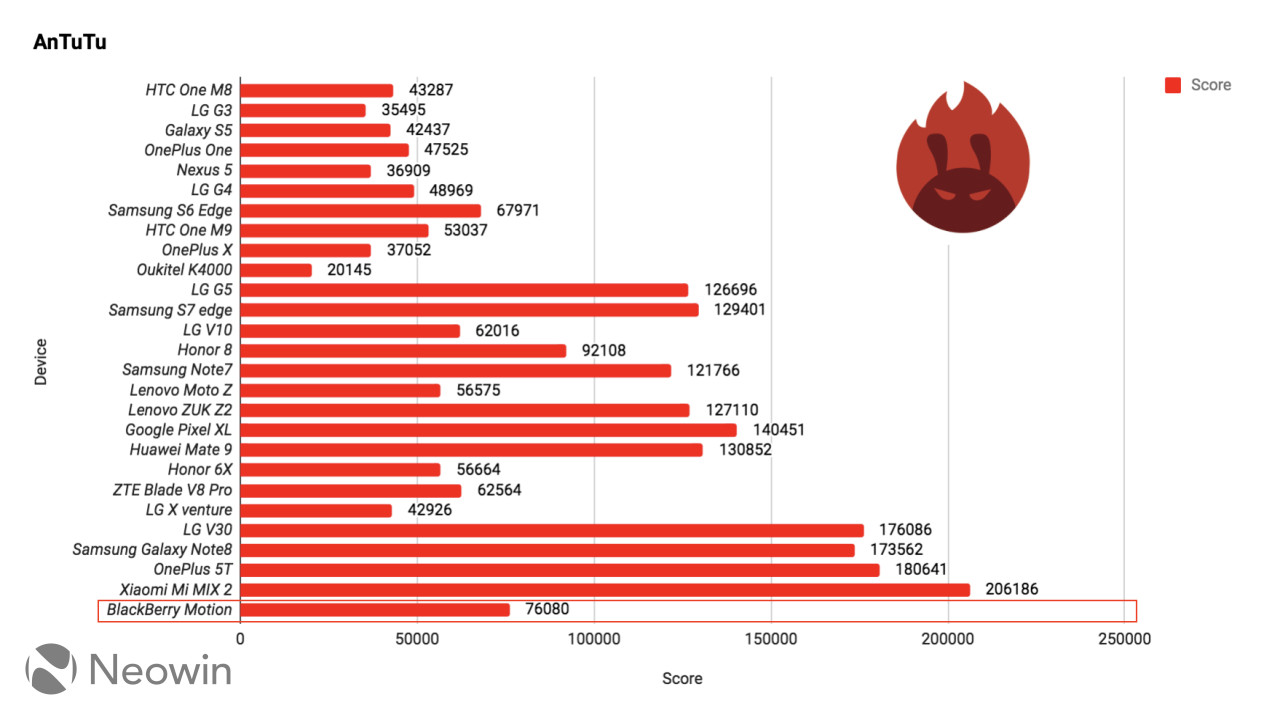 For daily use, the Motion works well and the hiccups that occur are few and far between. The small details like BlackBerry's proprietary apps are excellent options when it comes to security and convenience. If anything, it would be nice to see Android Oreo make an appearance in a timely manner but, like other manufacturers, this will most likely take quite a bit of time. The benchmark numbers have been posted for those interested with results from AnTuTu and 3D Mark.

The bar has been raised tremendously over the past few years when it comes to smartphone cameras. This is an area that can either make or break some smartphones, despite it being only one component of the whole. Luckily, the Motion isn't competing with the top dogs and is instead in a different category. The camera isn't a stellar performer, but it's no slouch either. It can produce some great shots during the day but does have some quality issues when capturing images and video at night. There is also an issue with the sound when taking videos, where things can sometimes sound faint or a bit hollow. This problem seems to be present whether shooting with the stock camera app or other apps like Snapchat.

The camera performs well, can focus quickly, and has options like image stabilization. Those that are more ambitious and want to have better control will be happy to know there is a manual mode that allows for fine tuning of the aperture, shutter speed, ISO, white balance, and more. While it's nice to have options, the manual mode isn't accessible through the camera UI and is instead found in the settings of the camera app. This isn't a major issue but it would have been more ideal to see the option in an area that would give users quick access. For the most part, the camera is your standard fare and should satisfy most, but those looking for an impeccable experience will need to look to another phone. 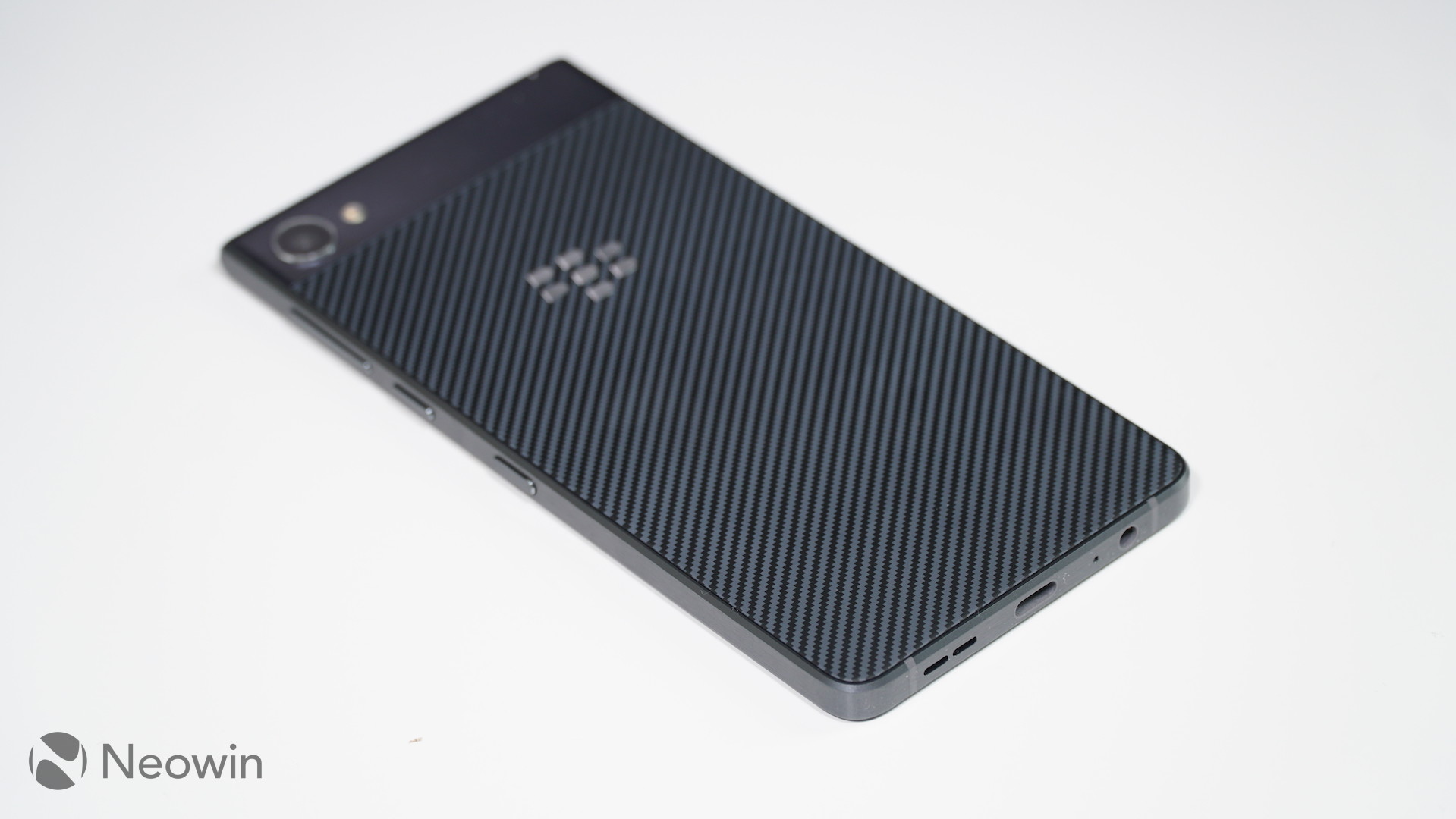 This is probably where the BlackBerry Motion shines the most. The phone packs a 4,000mAh battery, which is quite a bit more when compared to other handsets out on the market. When you pair this size battery with the efficient Snapdragon 625 processor, you end up with a device that can easily last all day regardless of what you might throw at it. In my usage, a typical day would start at around 8am and was comprised of web browsing with Chrome, email, Twitter, music streaming with Google Play Music using Bluetooth, light camera usage shooting images, YouTube, Google Maps with GPS, and Snapchat. By the end of a 16-hour day, the phone was at around 30 percent of battery life remaining, and that's without making use of the battery saver mode. If you do happen to need to recharge the phone, it can top up quickly making use of Qualcomm's Quick Charge technology. BlackBerry even has a Boost Mode that users can engage if they want to charge even faster. If you are going to be out all day and need something that will last, this is the phone you want to have with you. 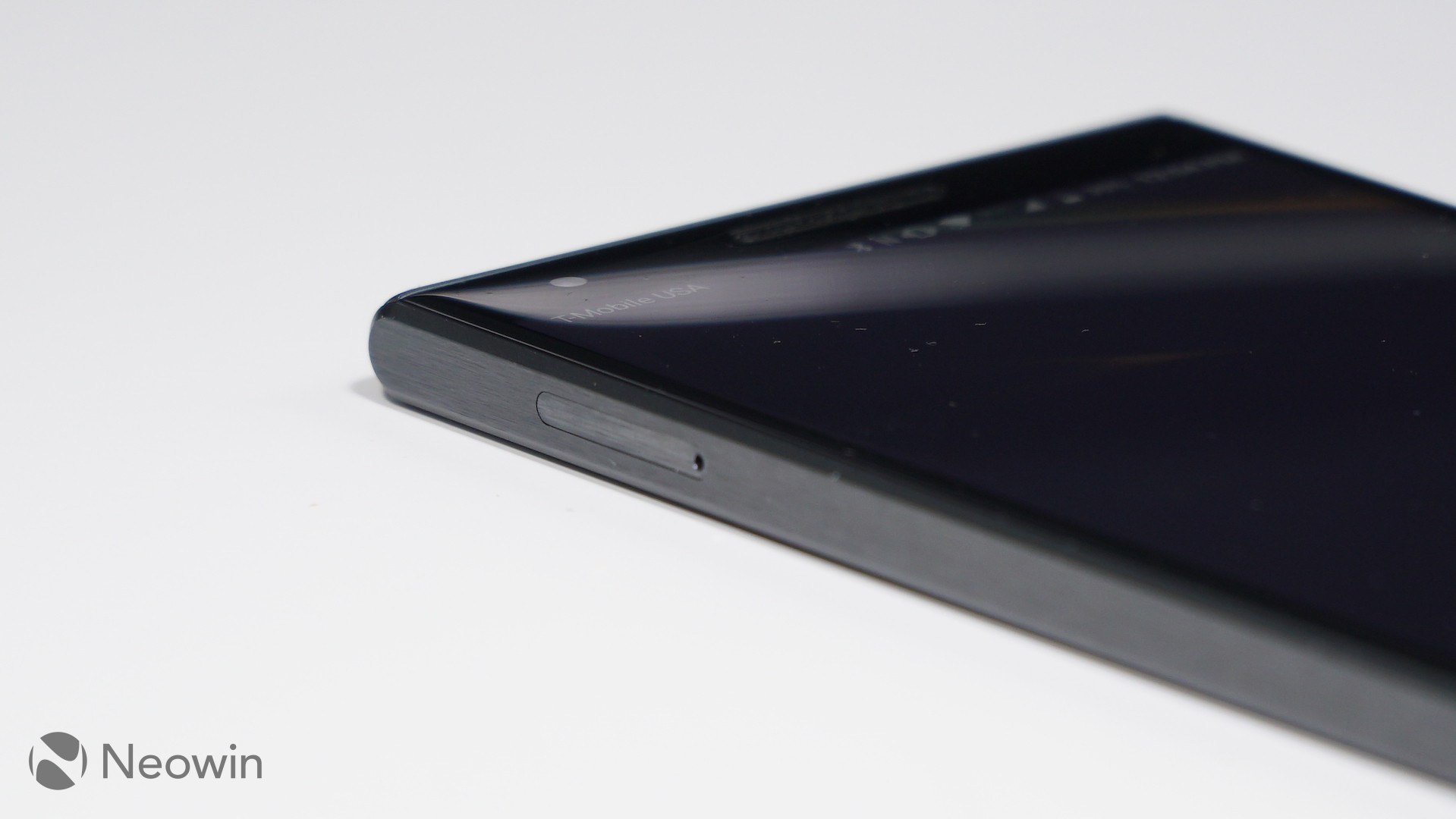 The BlackBerry Motion is a solid handset that offers just enough to make things interesting. The design is different, the build is solid, the software has the firm's touches on it to make it stand out from the crowd. These are all great things but what most will question, before even getting to experience it, is the price. When all is said and done, you're looking at $449.99 for the unlocked variant in the United States which, for some, can be a hard pill to swallow.

In 2018, there is a vast selection of handsets at all kinds of prices. You have phones that start at $200 that look just as sleek as phones that cost $800. You have handsets that are mid-range that give users just enough to keep them away from top tier models. You also have relative newcomers like OnePlus looking to steal some of the thunder away from top players by providing a phone with top specifications for hundreds less than the competition. Although the marketplace has become more convoluted, what's clear is that there is now truly something for everyone - and all the options are quite good. So the question is: where does that leave the BlackBerry Motion?

Last year, BlackBerry re-entered the market supported by TCL, giving users a taste of the past, mixed with the present. The Motion is the second step in this journey that attempts to give users who might have liked the KEYone but wanted something that looked more like a traditional smartphone. The device comes with a purpose and the firm behind it has executed what it thinks to be the best option for potential clients. The Motion isn't a device that's going to call out to all users and it won't have huge kiosks dedicated to it at stores - and TCL understands this. Its techniques might be highly targeted but it's apparently succeeding. While it might not have the same massive following it once did, it has found an audience that appreciates the products it is building, which means that users perceive value in owning a BlackBerry and the experience it provides - and that's a very good thing.