Despite a 100 million dollar marketing campaign, the Blackberry Storm has gotten off to a bumpy start. Early buyers have complained about technical bugs with Research In Motion's (RIM) first touch screen BlackBerry, according to The Wall Street Journal. 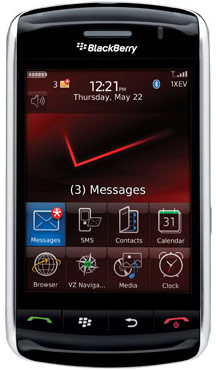 The company sold roughly 500,000 units in the first month after the Storm's October launch, in time for the holidays, contrary to the massive 2.4 million sale of iPhone 3G devices during its launch. Apple holds 25% of the North America's smart phone market.The iPhone 3G 8GB model costs $199 with a 2-year AT&T contract. The Storm is the same price after a $50 online discount.

Early Storm owners have complained about many software and hardware bugs. The device was rushed to market despite glitches in the stability of the phone's operating system, according to people close to the launch.

Verizon Wireless has declined to comment on specific sales figures for the Storm, but said the percentage of units returned is in the single digits, standard for a smart phone. RIM considers the Storm "an overwhelming success" and is making 250,000 devices a week to meet demand.

Verizon and RIM have provided a software update for the Storm in December similar to Apple which released a quick update to its buggy 2.0 software after the release of the iPhone 3G. Looks like it has become the trend of smartphone makers to release buggy software and correct it later by software updates.