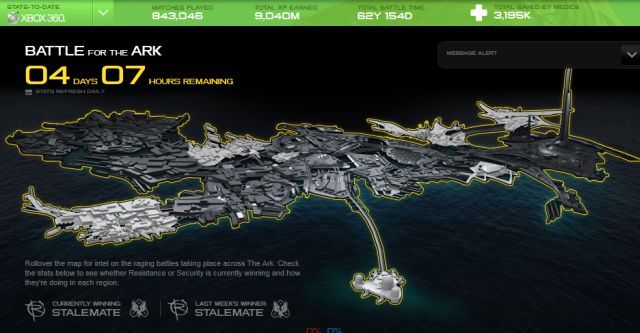 A few weeks after the release of the sci-fi first person shooter Brink, the development team at Splash Damage has now launch the official player stats page for the game. The stats are currently just for PS3 and Xbox 360 owners. PC owners will get their own stats page for the game "soon". Players can track their own multiplayer stats with the web site and the game's publisher Bethesda Softworks has announced that an update to the site later this year will help Brink players gather in clans and hold tournaments.

Since the game officially launched in mid-May, PS3 and Xbox 360 gamers have had a told of over a million online matches in Brink. There's been 80 years of playtime on the game's online servers and over 10 billion XP points have been generated. These stats are from multiplayer matches only; the single player Campaign mode and  the Challenge modes are not a part of the stats page.

In related news, the first free Brink DLC pack is now scheduled for release later this month. The Agents of Change DLC pack will include two new multiplayer maps (Founders’ Tower and Labs). It will also add a number of new player items such as a napalm grenade, a pyro mine and a tactical scanner which "allows players to reveal the active buffs of their opponents, allowing them to pick off enemies more strategically." The pack will also have two new weapon attachments and two new player outfits to choose from.