In today's installment on the Building Windows 8 blog, Microsoft described the new "hybrid" boot mode that will be included in Windows 8. According to Microsoft's claims, the new algorithm will result in 30 to 70% faster boot times compared to a traditional "cold" boot in Windows 7.

The need for a clever way to speed up cold boot times was made evident by telemetry data from Windows 7, which demonstrates the large percentile of Windows 7 users that insist on shutting down their machines: 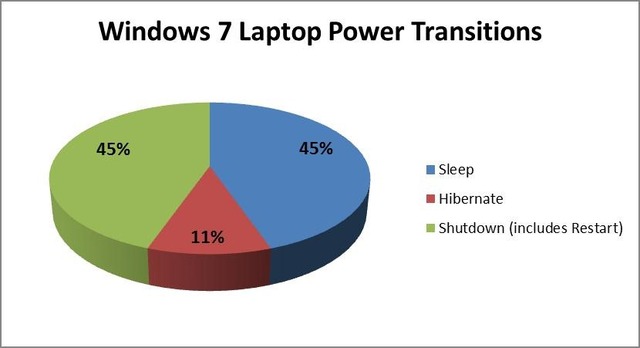 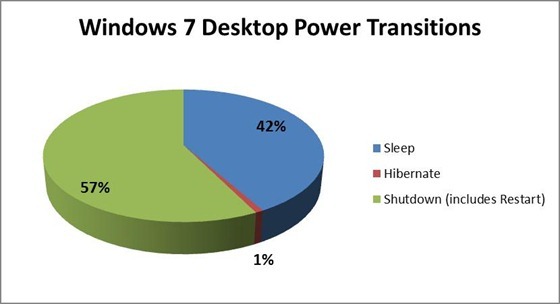 Clearly there were users who preferred shutting down to minimize energy consumption that is required for sleep modes. On the other hand, there are also users that prefer an almost "instant-on" resuming experience that sleep offers. And finally, there are the small number of users in-between who enjoy both with hibernation.

However, hibernation requires a large amount of hard disk space that scales according to the amount of RAM a user has installed on their computer. In addition, some users would also prefer a clean start to their current working sessions upon a login.

The new Windows 8 "hybrid boot" takes advantage of both shutting down and resuming from a hibernation file. Microsoft describes the Windows 7 shutdown process as follows:

It should be noted that a "clean" shutdown will still be offered as a UI-configurable option, or by invoking "shutdown /s /full /t 0" from the command line in Windows 8. Rebooting the system will also trigger a clean shutdown to accommodate installers that reboot the system due to a driver or system file change.

So how do these changes stack up across many existing Windows 7 PCs? The changes are universally positive:

An example is seen in an impressive video posted by a Microsoft program manager. The laptop shown in the video is using EFI boot technology:

These impressive results will be made clear to developers and enthusiasts alike in the upcoming BUILD Conference in Anaheim, which kicks off next Tuesday the 13th. Neowin will be providing live coverage of the four-day event.