AMD still has not launched its Bulldozer platform, but many are wondering what kind of performance the platform will have. Apparently, we now have an answer. Donanim Haber got hands on a recent engineering sample, and the sample is allegedly able to run limited cores up to 4.2 GHz. This means that AMD processors could potentially outperform Intel processors at certain tasks. 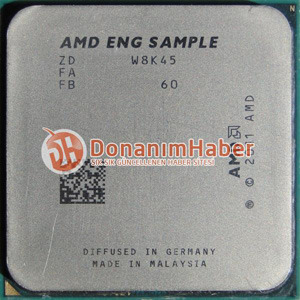 The latest sample uncovered is identified as a FX-8130P, has a base clock speed of 3.2 GHz. With all four Bulldozer core modules running, the processor can turbo boost up to 3.6 GHz. When only two cores are running the CPU cranks all the way up to 4.2 GHz and during testing in an AM3 socket-equipped motherboard and running alongside an NVIDA GTX 580, the Bulldozer-based processor turned in a 3DMark 11 score of 6265 with a physics score of 7487.

Bulldozer should be launching around the same time as Intel's Sandy Bridge-based Xeons, and based on this it seems like there is no way that Bulldozer will be able to compete with those processors in terms of raw performance. However, if AMD prices the parts right, they could convince customers to buy the Bulldozer CPUs.