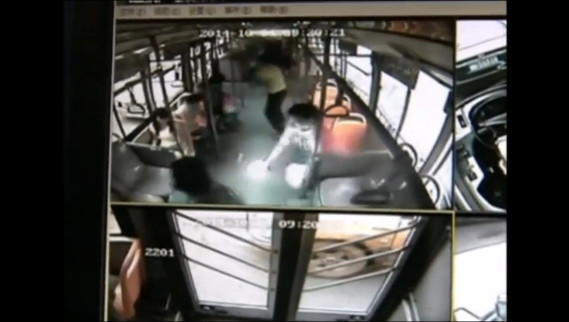 The time has come to exit this bus.

A woman got the shock of her life while swapping out a battery on her as yet unidentified mobile phone while on public transport in the Sichuan province of south west China. The CCTV footage shows the device bursting into flames before the panicked owner and others flee the bus, all in all while the phone still appears to be in flames. Check out the video below for the whole ordeal.

Although the manufacturer was not identified, Chinese authorities warned about using cheap knock offs to power mobile phones. More recently a girl was injured by an exploding Galaxy S2, while last year an unlucky Hong Kong resident saw his whole apartment go up in flames from an exploding Galaxy S4 which he had thrown under his sofa in a state of panic.

Both times the owners had denied using 3rd party chargers or batteries.

If you wondered how dangerous it is to use 3rd party accessories, look no further than last year in which a Thai man was electrocuted to death simply for using a cheaper unofficial iPhone charger. It's just not worth the hassle folks!