If you believe the numbers from research firm ComScore, Microsoft's smartphone market share in the US has stayed more or less the same in the past few months. After showing a gain of just 0.2 percent in February, and a gain of 0.1 percent in March, ComScore's numbers for the three months that ended in April 2013 showed it had a share of 3 percent, down 0.1 percent. 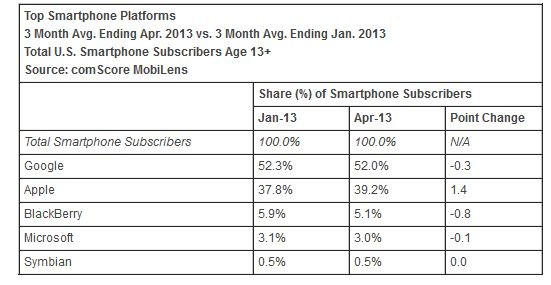 ComScore says their latest numbers show that 138.5 million people in the U.S. currently own some kind of smartphone, which represents 58 percent of all mobile phones in the country. Apple still is the single biggest smartphone maker in the US with 39.2 percent, followed by Samsung with 22 percent, HTC with 8.9 percent, Motorola with 8.3 percent and LG with 6.7 percent.