Microsoft’s upcoming Xbox One console features a heavy integration of social connectivity features, but will it mark the return of social media apps, which were removed from the Xbox 360 in 2012? So far, Microsoft isn’t saying.

The NFL partnership section of the official Xbox One website touts the Skype and Twitter capabilities of the console’s NFL app, possibly hinting at the return of social media apps on a Microsoft console, or at least a social media emphasis. The website states an “integrated Twitter” portion of the NFL app will allow users to track their favorite teams, though it doesn’t state if an official Twitter app will be released for the upcoming console.

In October 2012, Neowin first reported that Microsoft was removing its in-house Facebook and Twitter apps with that year's fall update. The apps were two of the first for the Xbox 360, having been released on Nov. 17, 2009. 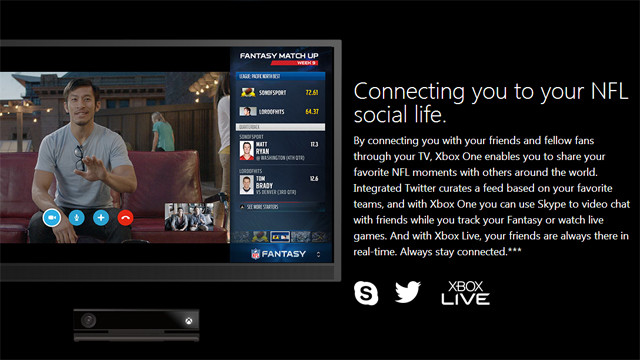 A Microsoft spokeswoman provided the following statement regarding the use of Twitter in the NFL app for Xbox One: “To clarify, the Twitter icon on Xbox.com is in reference to Twitter integration on the NFL app on Xbox One. In the future, Xbox One will help you share your favorite NFL moments with friends and fellow fans through an integrated Twitter feed that is curated based on your favorite teams.”

The spokeswoman later clarified that Twitter integration “will not be available on Xbox One this season, so you won’t able to tweet via the NFL app when Xbox One launches.” When asked if a Twitter app would eventually be released for the console, however, the spokeswoman hinted that Microsoft is working with a variety of content partners, possibly including social media companies.

"We’ve built an app-friendly platform with Xbox One and are in ongoing conversations with partners,” she said. "Stay tuned for more details.”

Like Windows 8 and Windows Phone 8, Microsoft’s Xbox One operating system features many social networking features. The "One Guide” television programming list, for instance, aggregates trending content from across Xbox Live. Additionally, Xbox Live’s new friend system on Xbox One is akin to Twitter, allowing users to follow one another. Similarly, Skype will be integrated in the console, allowing more interactivity with friends, and game videos can be directly uploaded online for sharing.