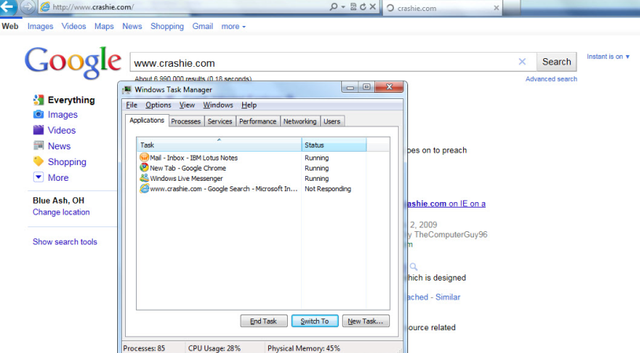 Many moons ago, actually August 31 2006, a website called crashie.com was launched. The purpose of the website was to, as you can guess by its name, crash IE. The idea was simple, a single line of code would cause most versions of IE7 and earlier to crash which forced you to use an alternative browser to view the sites content.

Many would think that the story ends there and the novelty site would fade into oblivion, unfortunately for Microsoft, that is not the case. Microsoft patched the flaw used for crashie.com in IE 8, which many thought would be the end of the website, but if you now visit crashie.com in IE9, the website locks up IE9 too.

What is actually causing the lockup of IE9 at this point is unknown, but Neowin was able to confirm on three different machines that the RTM of IE9 will lockup when visiting the website. While not good for Microsoft, those looking to play a joke on their IE9 using friends will have a new weapon for their tomfoolery.

Thanks for the tip wolftail

[Update] We are getting a mixed bag of reports, some say it loads without issue, others report that it locks up their system and one user reports a timeout.