In August, Microsoft announced that Delta Airlines would be giving all 19,000 of its flight attendants Nokia Lumia 820 smartphones to use for customer service while on board the company's aircraft. Now there's word that those same employees will be getting a nice hardware upgrade in the near future. 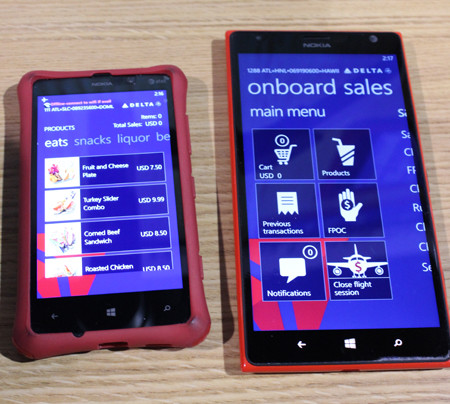 During Microsoft's Convergence conference in Atlanta last week, Delta announced plans to swap out the Lumia 820 for the 6-inch 1520 smartphone from Nokia. ITBusiness.ca reports that while the 820 devices could take drink and meal orders from passengers in-flight, the larger 1520 model can be used for other services such as selling instant seat upgrades on the plane. Delta uses Microsoft's Dynamics AX backend software for its retail operations.

The smartphones will also be able to record credit card info from passengers and then send that data down to the ground while in flight, via Gogo's Wi-Fi service, to see if the card is valid. Previously, Delta took a passenger's credit card info but could not check to see if it was correct until the plane ended its flight.

Delta's pilots are already using another Microsoft hardware product, the Surface 2 tablet, as their permanent replacement for their old paper flight handbook.