One of the best features of Microsoft’s digital assistant, Cortana, is that it can be updated on the back-end, without the need for the user to do anything. As such Cortana becomes more and more intelligent and useful in a subtle way over time.

And this is exactly what’s been happening in the past few days. Some users are reporting new additions to Cortana’s repertoire, a slightly changed UI, and a new Quiz option that allows the AI to learn a bit more info about you.

Right now this seems to be a either a staggered release or a public beta test of an upcoming update. In either case the new features will no doubt become available to everyone as Microsoft prepares to officially launch Windows Phone 8.1.

That’s where the official info ends, but there’s a bit more to this story. WPCentral forum member Talderon claims he’s a Microsoft employee with knowledge and access to the upcoming builds and updates. This hasn’t been verified but the information he’s sharing seems to be on the mark, so we’ll give him the benefit of the doubt for now.

According to Talderon, and it’s obvious you should take this with a big grain of salt, these are some of the features that Microsoft’s currently working on. Note that most of them are confirmed by users who have already received the update. 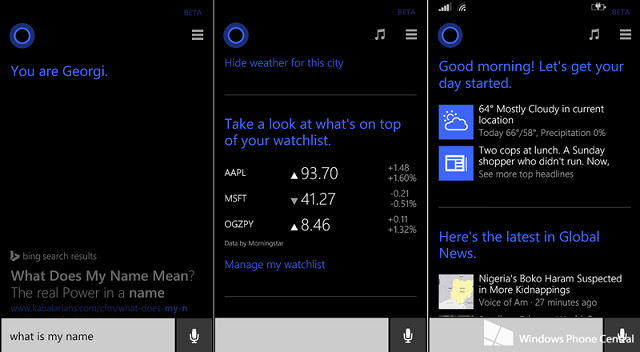 This user also claims that Cortana will become available in India sooner rather than later. We already know that the digital assistant is coming to the UK this month, and that she has her eye on the Netherlands, and even China. But if this source is to believed Microsoft may be looking to expand Cortana into one of the world's biggest markets, India, and soon. Unfortunately there's no release date mentioned.

Finally, Talderon claims Cortana will come to Xbox One and Windows 8.1 or newer. He also claims to have used it on the Xbox and said "it's very neat, especially when playing a Halo game". Now that sounds like a tongue-in-cheek response but we've seen previous signs that Microsoft is actively working to bring Cortana to other platforms and in most users' minds this was never a question of if but rather of when. Unfortunately there's no ETA on this.

With the launch of Windows Phone 8.1 later on this month, plus Cortana moving to the UK in the same timeframe, we'll just have to wait and see how much of this info pans out.