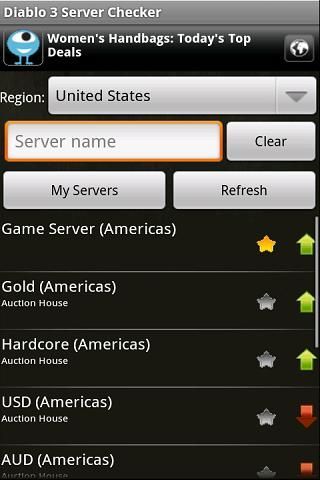 Diablo III has been released for a number of days now, but the action-RPG's creators at Blizzard on occasion takes the game's Battle.net servers down, sometimes without prior warning, for "emergency maintenance." If you own an Android smartphone or tablet, and happen to also be a Diablo III player, there's now a third-party app you can grab to see if the servers are up and running or not while on the go.

The Diablo III Server Checker, now available for free on the Google Play store, lets users view the current status of all of the Diablo III servers in any of the game's worldwide regions. If you are on the go and want to play the game when you get back home, the app will certainly help keep you informed. Keep in mind that this app was made by an outside company and does not have the official support of Blizzard.

In related news, Blizzard has now announced that the real-money auction house for Diablo III will finally launch on Tuesday, May 29th. The feature, which lets players purchase in-game items for real money, was supposed to launch on May 22nd but got pushed back due to Diablo III's launch week issues.