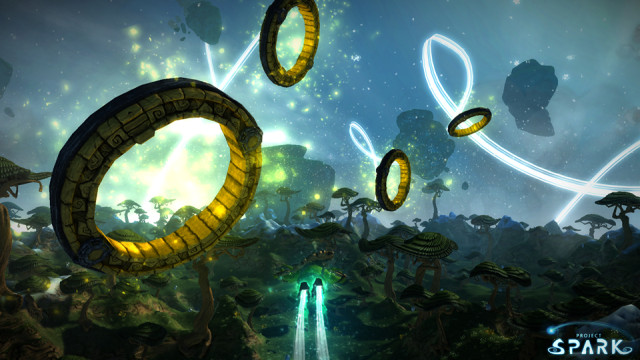 Of all the games that Microsoft showed off as part of its E3 2013 Xbox One console presentation on Monday, the one that came the most out of left field was Project Spark. The "game" isn't actually a game at all but a set of tools that will be provided to anyone to make their own creations.

At Microsoft's E3 2013 booth, we got a behind closed doors demo of Project Spark, which will be released for free for the Xbox One, along with the Xbox 360 and Windows 8 devices. Indeed, much of our E3 demo was conducted on a Windows 8 PC connected to a large 55 inch touchscreen.

Project Spark will have different modes for making games. One is the pure sandbox mode, where creators will basically work from nothing to build the game they want to make. The E3 demo showed that Windows 8 touchscreen owners can simply use their fingers to touch the game's environment to quickly generate hills, valleys and rivers. They can also turn the environments into forest, desert or other settings, and place objects like houses, creature and more into the game world.

One of the cooler features of the tools is that they allow users to quickly set up an AI structure for any object in the game world. We got a taste of this when the Project Spark demo operator put in AI behavior into a simple rock that caused it to attack when our player character approached it.

Another mode for making games is more structured. In this scenario, you are given menu choices to pick from and then the game changes to accommodate your selection. For example, we saw that we could simply pick a desert setting, then pick from one of three towns to place in that location to go on quests. This mode will likely appeal to younger users who may not be able to handle the more complex sandbox modes.

The final result should allow users to make pretty much any type of game inside Project Spark, from an Angry Bird-style puzzle game to a first person shooter to a strategy game.  The fact that Microsoft is developing Project Spark brings to mind the company's earlier XNA game development tools made for the Xbox 360 and Windows. Those tools are being retired but Project Spark would seem to be a logical replacement.

Unfortunately, Microsoft is not talking at the moment about how developers could make money, if any, from games created with these new tools. Hopefully we will have more information on that aspect of Project Spark before it is released. Microsoft has already set up a bare bones website for Project Spark, which lets people sign up so they can be informed when beta testing of the tools will begin.

Based on our E3 2013 demo, this free software is easy to use but still offer a way for budding game creators to make complex titles that will be able to be shared on Windows 8, Xbox 360 and Xbox One platforms.