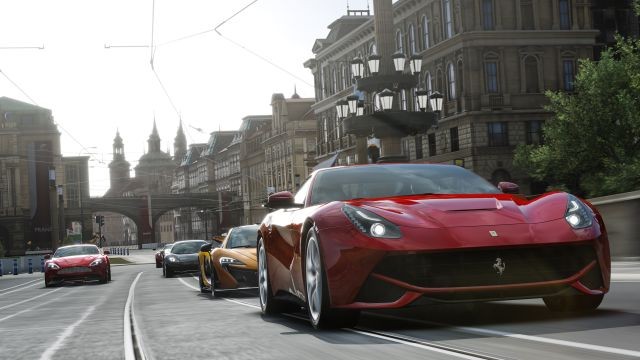 The Forza Motorsport racing simulation series has been a big part of the first two Xbox game consoles. The launch of the upcoming Xbox One console in November will also bring us the latest game in the series from developer Turn 10 Studios, "Forza Motorsport 5."

In a closed-door session during E3 2013, we got some more information about the game, along with a quick hands-off demo of "Forza Motorsport 5." Turn 10 Studios is naturally adding support for more cars for the latest installment, including open wheel racing cars such as the ones on the Formula 1 circuit, for the first time.

In "Forza Motorsport 4" for the Xbox 360, players were able to really get up close and personal with a small number of the game's vehicles in a mode called Autovista. That mode will be expanded in "Forza Motorsport 5" with a new name, Forzavista, and the ability to view all of the hundreds of cars that will be in the game in that mode.

Speaking of the cars, the graphics engine for "Forza Motorsport 5" will allow for the vehicles to have an incredible amount of detail. This was evident after we saw an example of a race where the car had generated accurate imperfections in its paint job after the race was completed.

The biggest new feature in the game is the Drivatar mode. Basically, the more you drive cars in the game, the more that it "learns" how you personally drive. The game then uploads that data to a cloud server to generate your Drivatar, so that when your friends and family play the game, they also can race against your virtual self, or you can compete with the Drivatars of your friends. It's a cool feature, but naturally we will have to play the full game when it comes out to see if it works as Microsoft claims.

There's still a lot that Turn 10 Studios is not revealing about "Forza Motorsport 5," including more details about multiplayer and the game's physics engine. The Turn 10 rep did hint that they have entered into an agreement with a major tire testing company that will help influence how tires are represented in the game. Overall, it sounds like "Forza Motorsport 5" will continue the stellar reputation of the previous games in the series when it launches alongside the Xbox One in November.