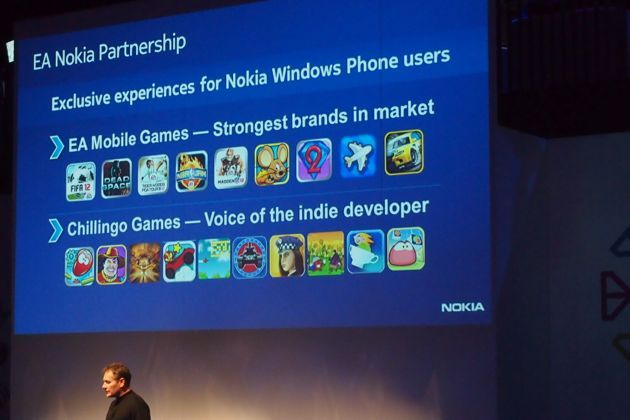 Nokia's newly revealed Lumia smartphones, based on Windows Phone 7.5, will be getting some gaming support from Electronic Arts. PCWorld.com reports that during Nokia World this week, Electronic Arts announced it would provide some exclusive games for Lumia owners to download and play.

EA will provide 20 games for the Nokia Lumia; 10 from its EA Mobile division (including titles like FIFA 12, Madden NFL and Dead Space) and another 10 from its indie games division Chillingo. There's no word yet on when these games will be released for Nokia's Windows Phone 7 devices. There's also no word if these games would eventually be released for any other Windows Phone 7-based phones.

Microsoft has been trying to get app developers to create programs for Windows Phone 7 but some have been reluctant to do so, mainly because of the lack of market penetration for Windows Phone 7-based phones compared to iOS and Android products. The fact that EA offering to create and sell a large number of its mobile phone games on the Nokia phones may signal a change in attitude towards the operating system among app developers.

In the meantime Nokia is still preparing to release the Lumia 710 and Lumia 800 smartphones to the UK and other parts of Europe later in November. Will the attraction of EA's games, along with other exclusive apps from ESPN and, yes, even Sesame Street, be enough for consumers to consider getting the phones ahead of the iPhone 4S or the various Android phones? We should certainly learn more in the next month.