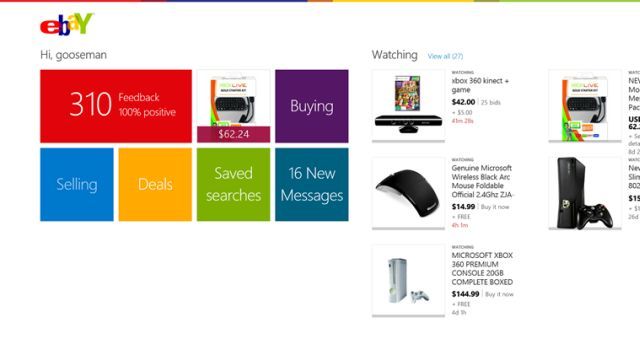 eBay released its official app for Windows 8 back in July in the Windows Store, two months before Microsoft's new operating system was officially released. Since that time, there have been many reviews that have been critical of the performance and features of the eBay app.

This week, eBay released a new version of the Windows 8 app, which it says adds quite a number of new features. The patch notes state that some of the new features include "my eBay messages, my eBay purchase history, ask seller a question, view seller’s other items, [and] save a seller."

There's also been some more Windows 8 live tile changes such as being able to receive live tile updates to the application tile. The new version of the app also allows users to pin eBay lists and eBay items to the Windows 8 Start menu. Finally, there's been some improvements made for scrolling from within the eBay app, along more search features and filters and some unnamed bug fixes.

The patch notes also state that eBay will continue to add features to the Windows 8 app based on user feedback, adding, "We will be adding more live tiles and seller functionality for creating listings in the near future."