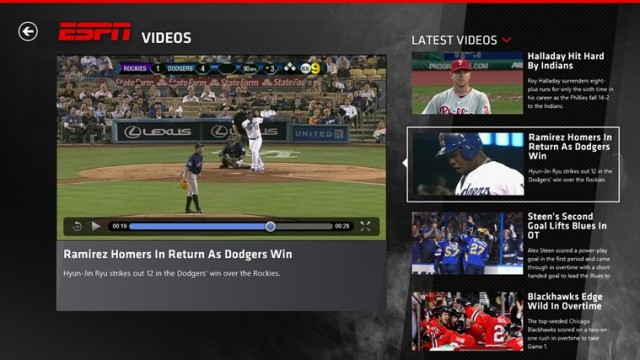 ESPN last released an update for its Windows 8 app in March, adding a number of new features for the app devoted to pro sports news coverage. Today, a new version of the app is now available to download from the Windows Store.

The change notes for the new version include word that the ESPN app now adds pro tennis news in the app's tennis section, about a month and a half before the start of the Wimbledon tennis tournament. The new version also adds some enhancements to the app's Snap view when it is accessing the Golf, Tennis, and Racing sections. ESPN Insider articles, which were removed in a previous update have now been put back again "by popular demand."

The app also has a number of bug fixes and improvements such as some adjustments made for the NHL standings layout, having the Live Scoring Tile work once again and more. In an interesting move, the change notes also announce some upcoming update plans, including a new layout for the app's top news stories, better section load times and support for larger monitor resolutions. It even asks for more user feedback to the Windows 8 app, stating, "We are listening and working to address your concerns."