As if it wasn't painfully obvious that Facebook is launching a music based product tomorrow, we've just found out part of what that feature is thanks to a tweet by an employee of Facebook who probably didn't know any better.

The company is on lockdown just before it's F8 conference that kicks off tomorrow, and we know the service is coming, but we don't know what exactly it'll do. Now, we've got our first insight. Techcrunch reports that Ji Lee, creative director at Facebook tweeted today:

The “Listen with your friend” feature in ticker is blowing my mind. Listen to what your friends are listening. LIVE.

Shortly after the tweet went live, it was pulled but Mitchell Holder managed to screenshot it before it was taken down. The feature in question means that all music you use on the service will appear in the ticker on the right, as well as your friends' listens. You'll be able to listen to the same song at the same time and gossip about it over Facebook chat now, too. Rad!

Facebook music is coming, and all those changes your friends are complaining about will add up even more when the company flips the switch for the music service.

Ji Lee is listening to Black & Blue by Mike Snow and feeling happy it’s another beautiful sunny day in California.

Hopefully Facebook doesn't lose Ji to "resignation" after the leak, as the event is now less than 24 hours away. We'll be covering the events as they unfold. 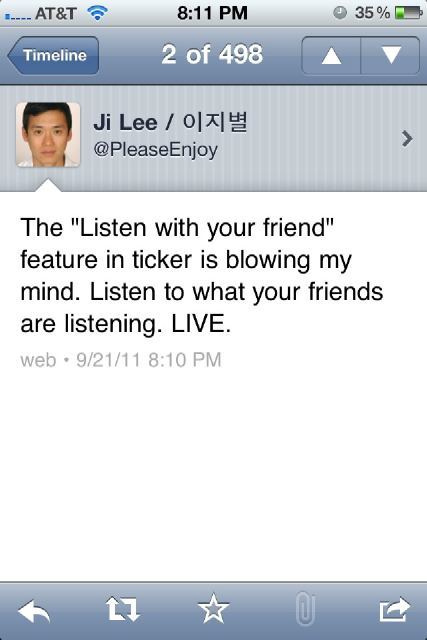