Facebook is, as you'll know, the most popular social network in the world. It overtook MySpace, which is now seeing a steady decline, with even the face of the company (Tom) having started ignoring his account. Facebook's growth is just as steady as MySpace's decline, and now, the website ranks as the second most visited website in America.

According to Mashable, Facebook is now larger than Yahoo!, in terms of site traffic, after it received 133 million unique visitors in January this year, with Yahoo! slightly below, at 132 million. Just recently, the social network celebrated it 400 millionth member, with the user base showing no sign of slowing down. Yahoo! remained the top U.S. website for years, until Google took the top spot, and now it has been pushed down to third, with the embedded graph below indicating its decline.

Social networking is becoming increasingly popular as years go by, with relatively new websites such as Twitter becoming extremely successful. The popularity may be somewhat attributed to the skyrocketing popularity of smartphones as of late, and, just as importantly, the applications that can be installed on them. 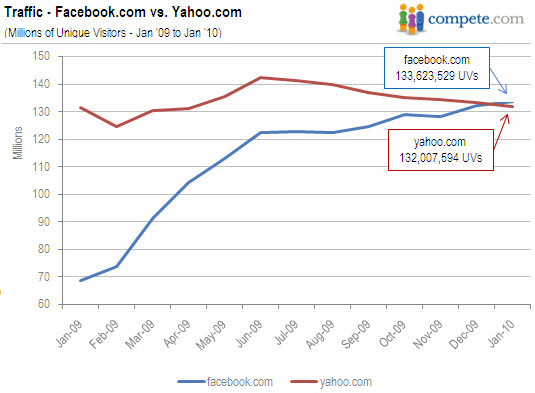