Facebook is a tremendous tool for socialising and getting in touch with people. By its very nature it is built to let you do so in the most convenient way possible. Some users choose to use pseudonyms for further privacy, whether that's privacy from real-world friends or otherwise. However, it would seem that Facebook aren't excited by the possibility of "Christiano Ronaldofan" going around on their service if his real name is John Doe.

News from within Germany seems to suggest that they are taking action, showing prompts to users to allow them to tell the company directly. So far it seems to only be in Germany. At the time of writing I haven't encountered this on my personal Facebook account but it could appear globally soon. Either that or it's an attempt to aid Germany's legal set-up. Germany, while part of the European Union and therefore sharing the majority of rules with its fellow countries, operates a few choice alterations and additions of its own.

Among these additions is the 'Impressum' online. The term is derived from Latin, but has no real meaning in English. In Germany though it is the term used for a database which is publicly available, and confirms ownership of something. This is applied to newspapers, books, magazines, and websites, but possibly also Facebook accounts. A competent lawyer could probably argue a Facebook account is a website of sorts, with that being made easier by the Facebook username appearing at the end of the URL. If you've been chosen to snitch on your friends, here's the pop-up you'll receive. 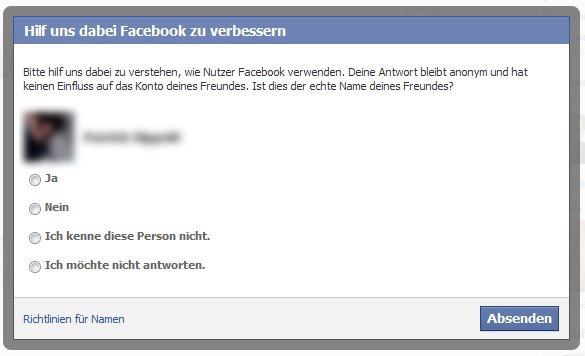 Please help us understand how members use Facebook. Your answer remain anonymous and won't affect your friend's account. Is this the real name of your friend?

Certain parts of this translation may not be correct, though the majority is correct, having been contributed by Neowin user Mephistopheles. Mephistopheles also points out that this has angered some bloggers, who compared the move to something the Stasi would have been behind. For those unaware, the Stasi were the "Ministry for State Security" in what was known as East Germany. Effectively a secret police they were comparable to the KGB in the Soviet Union, who are identified as the "Committee for State Security".

Plenty of horror stories about the Stasi exist. Stories of suspected dissidents being executed are fairly common, and executions for telling a joke had happened as well. The Stasi were well known for their actions, none of which were particularly pleasant. With Facebook being compared to the Stasi by Germans, it's a big deal for the company. The Stasi didn't really make friends with people, but the comparison could be taken as an unusual one. The easiest way to compare the two is the encouragement made to act as an informant against your friends and family.

It could be completely innocent. They genuinely might be interested in how and why people choose to use pseudonyms for other reasons. There are some legitimate reasons for using a pseudonym on the service and there's a chance that they won't do anything. They expressly say nothing will happen to your friend's account. Maybe they're being honest, but with the Stasi comparison being made it could leave a sour taste in the mouths of many German users.

Have your say in the Neowin forums, and see how other readers feel about the change. Do you feel it's a step towards excessive control of your Facebook? Let us know!